Strasburg's new contract is the 9th largest in MLB history. 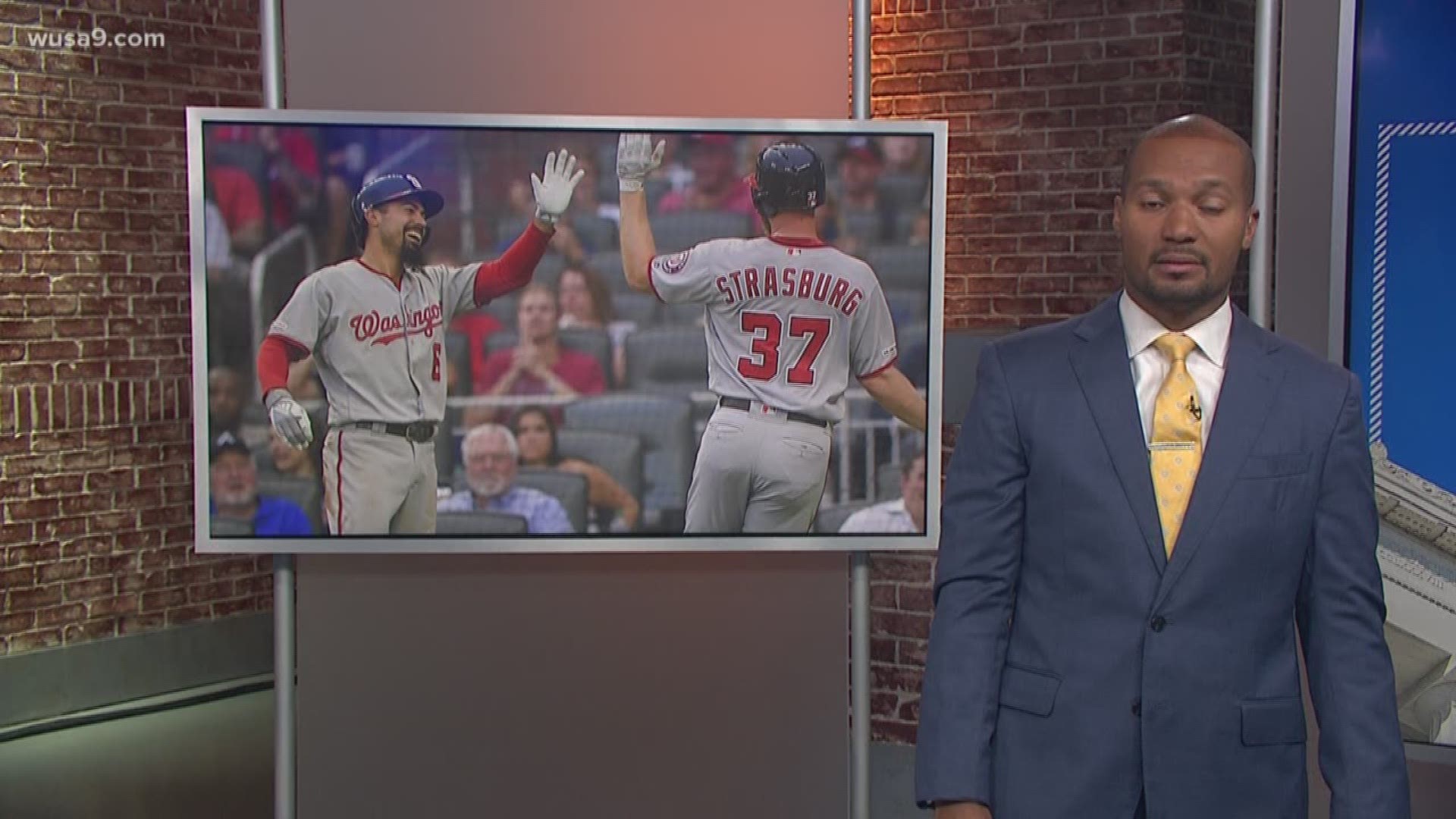 WASHINGTON — Strasmas came early for Washington Nationals fans, as the Nats confirmed Monday that World Series MVP Stephen Strasburg would re-sign with the franchise in a record-breaking seven year, $245 million contract; the deal is the ninth-largest MLB contract ever.

"We are very excited to welcome Stephen Strasburg and his family back to the Washington Nationals," Managing Principal Owner Mark Lerner said. "We would not have won the 2019 World Series, or accomplished everything we have these last 10 seasons, if not for Stephen’s many contributions."

Now the question on everyone's mind is will Anthony Rendon be wearing a Nats jersey in 2020? In an interview with NBC Sports Washington, Lerner made it clear the team's budget could only accommodate either Strasburg or Rendon -- not both.

"We really can only afford to have one of those two guys,” Lerner said in the interview. "They’re huge numbers. We already have a really large payroll to begin with. So we’re pursuing them, we’re pursuing other free agents in case they decide to go elsewhere."

RELATED: Report: Stephen Strasburg to re-sign with Nationals after flirting with free agency

The Competitive Balance Tax (CBT), which MLB owners have turned into an unofficial salary cap, has been set at $208 million for the 2020 season. According to a team press release, the Nationals now have 31 players on the 40-man roster, and the 2020 adjusted payroll sits at $130,808,711.

Ted Lerner, the patriarch of the family that owns the Nationals, is among the wealthiest owners in the MLB with a net worth of $5.2 billion.

RELATED: How Maryland's wealthiest man came to own the Washington Nationals

According to Spotrac, a website tracking player contracts and financials for the MLB, NBA, NFL, NHL and MLS, the Nationals 2019 payroll was $172,307,808. Strasburg's adjusted salary accounted for 2.9% of that budget, while Rendon took a 10.9% chunk; Max Scherzer's $37.5 million salary accounted for the largest percentage of the payroll at 21.77%.

Theoretically, Strasburg's $35 million a year contract added to the 2019 payroll would not put the Nats over the CBT threshold for 2020. But given Rendon's performance in 2019, and the fact that the top 2020 salary for a third baseman is $35 million, the Nats would likely need to shell out a good bit more than his $18.8 million 2019 salary to keep "Tony Two Bags." The average 2020 salary among the five highest-paid third basemen is $25 million.

Strasburg's previous seven-year, $175 million contract -- he opted out of the final four years three days after he was chosen as the World Series MVP -- had him making $25 million per year.

As it stands now, Strasburg and Scherzer combined earn more than 55% of the 2020 payroll.

Scott Boras, Strasburg's agent, cited the Nats decision in 2012 to shut Strasburg down during the playoffs to protect his long-term health as one of the reasons Strasburg decided to "stay in one uniform and remain a Washington National for the remainder of his career."

"For Stephen, for him to establish a legacy and wear a Curly W for his career was something that was very important to him, and I think it was because he knew that people in this organization cared deeply about him," Boras said.

RELATED: Free BBQ for Strasburg, Rendon and Zimmerman -- but only if they stay with the Nationals

So far this off season, the Nats have exercised 2020 options with Adam Eaton and Sean Doolittle, and signed contracts with Yan Gomes, Wilmer Difo, Hunter Strickland, Howie Kendrick and Stephen Strasburg.

RELATED: What's next for the Nationals after the 2019 season?

The Nationals still have four players eligible for salary arbitration that they have not made deals with, including Trea Turner. The team declined Ryan Zimmerman's 2020 option, but there's still a good bit of optimism surrounding a future for Mr. National in D.C.