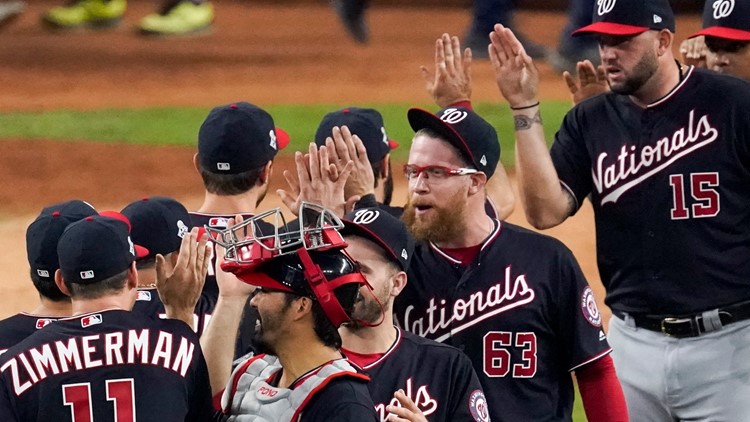 Photo by: AP
The Washington Nationals celebrate after Game 1 of the baseball World Series against the Houston Astros Tuesday, Oct. 22, 2019, in Houston. The Nationals won 5-4 to take a 1-0 lead in the series. (AP Photo/Eric Gay)

What's next for the Nationals after the 2019 season?

WASHINGTON — Regardless of the World Series outcome, Washington had a historic year after D.C. not seeing a World Series since 1924. The Nationals made their mark on the District, but what's next?

Anthony Rendon is in the last year of his contract. The National League MVP candidate was reportedly offered a new contract for seven years between $210-$215 million. Bryce Harper was offered a similar average annual amount at this time last year.

RELATED: Here are some of the times the Nationals had their backs against the wall

FYI, Harper and Rendon share the same agent, Scot Boras. Rendon has spent his entire career with the Nationals since he joined the majors in 2013.

He has also lived up to why Nationals Manager Davey Martinez said Strasburg "has been the rock" this season. Going into Game 6 of the World Series, Strasburg is 4-0 with a 1.93 ERA this postseason. His 1.34 career ERA in the playoffs is second best to only Sandy Koufax with at least seven starts.

The Nationals hold an $18 million option on Ryan Zimmerman from his last big contract, a six-year, $100 million deal. The Nationals 2020 option includes a $2 million buyout. That means the team will likely buy out his contract and renegotiate a new one.

No word on if Gerado Parra will return. He signed a one-year major league contract with the Nationals on May 9, 2019. Parra changed his walk-up music to the popular children’s song "Baby Shark." The song became a crowd favorite at Nationals Park. Nationals fans began to sing and do the Baby Shark song dances.

While the future of the Nats is unwritten, they're looking forward to the remainder of the Series, and what's to come.