WUSA9 and other newsrooms fought to have the Department of Justice release surveillance video from the Capitol riot. 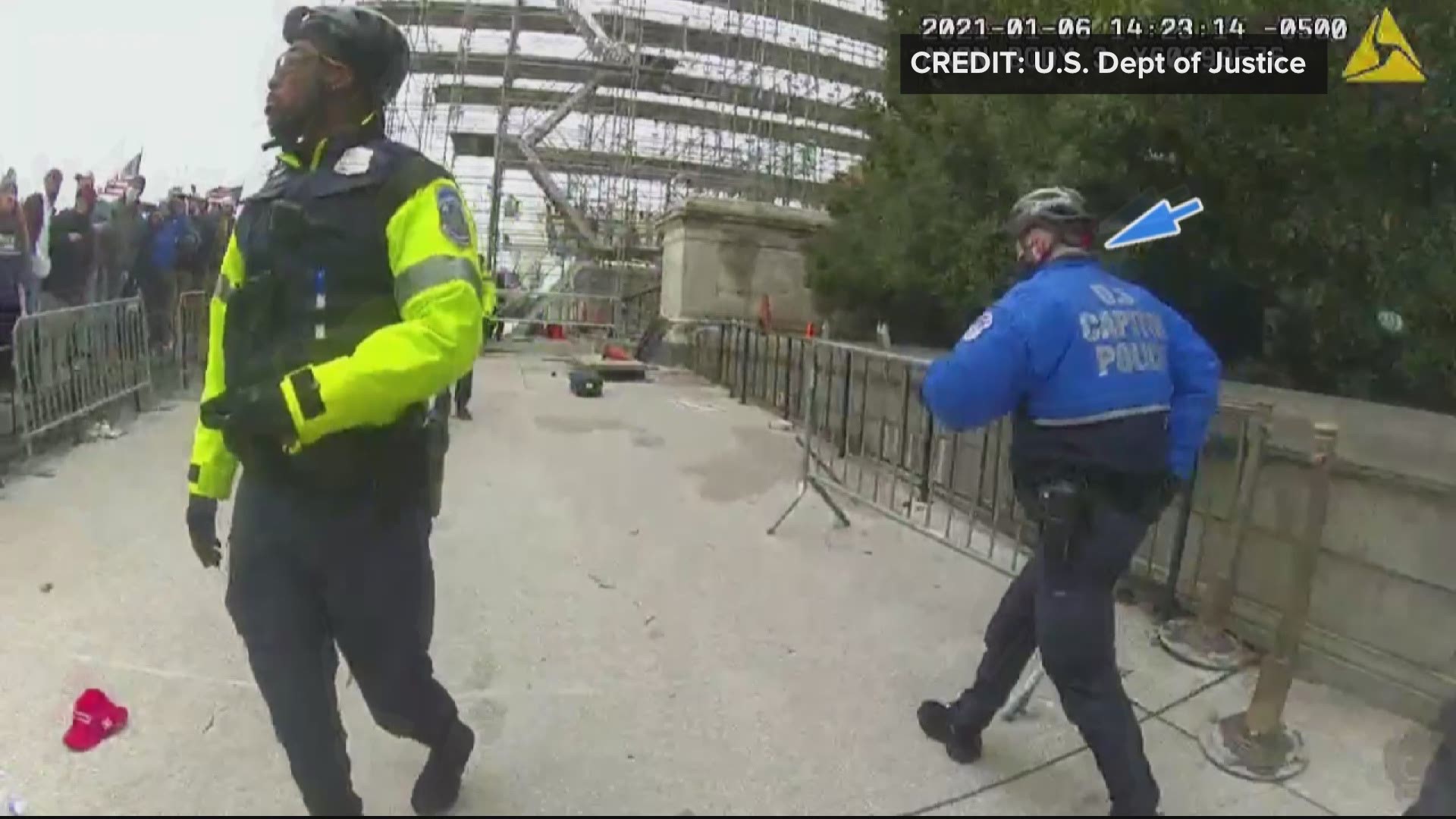 WASHINGTON — Never-before-seen video from the January 6 siege on the U.S. Capitol offers a new look at a violent confrontation between fallen U.S. Capitol Police Officer Brian Sicknick and two rioters indicted for assaulting him.

Several videos of the confrontation were released to WUSA9 after a successful legal challenge by its parent company TEGNA and other media outlets. The footage was compiled from six surveillance videos, three body camera videos recorded by DC Police officers and one open source cell phone video. The videos were shown during a court hearing for one of the defendants, George Tanios, but were not included on the official docket, which is why a judge ordered them released.

Tanios, 39, a sandwich shop owner in Morgantown, West Virginia, and his co-defendant, 32-year-old Julian Khater, of Pennsylvania, were indicted in March on 10 counts, including conspiracy to injure an officer, assault on a federal officer with a dangerous weapon and engaging in physical violence in a restricted grounds with a deadly or dangerous weapon casing significant bodily injury. If found guilty, they could potentially face decades in prison.

In the videos, Khater, marked by a red arrow, can be seen appearing to hold up a canister and move it back and forth. Nearby officers, including Sicknick, marked with a blue arrow, can be seen in a bodycam video covering their faces and moving away.

Warning: These videos show unedited footage from the Capitol riot and may contain foul language. Viewer discretion is advised.

Bodycam footage captured the officers pulling away from the line to have their eyes doused with water.

Another video captured by a surveillance camera shows three officers, including Sicknick, appearing to react to being sprayed with something and moving away from the barricades. Khater can be seen in this video from a different angle appearing to spray something from a canister.

A fourth video, captured by another surveillance camera, shows Sicknick rubbing his eyes and pouring water on his face shortly before 2:30 p.m.

In a statement to WUSA9, U.S. Capitol Police said the department had opposed the release of the videos to prevent officers from having to relive the events of January 6:

“We are disappointed new, graphic videos of USCP officers being assaulted on January 6 were released after a legal challenge filed by several media outlets. Although the Department acknowledges the public’s desire for information, and understands the legal obligation for the Department of Justice to provide the videos, USCP leadership requested the videos not be released to safeguard officers and their families from being forced to relive that traumatic day.”

Prosecutors say Tanios bought two cans of bear spray and two cans of pepper spray or Mace on January 5 before driving to D.C. to meet Khater, a friend who traveled to the District from his home in State College, Pennsylvania.

After attending former President Donald Trump’s “Stop the Steal” rally on January 6, the two men are accused of marching to the U.S. Capitol building with an angry mob demanding Congress stop the certification of President Joe Biden’s electoral victory. In charging documents, federal prosecutors claim Tanios and Khater were part of “a crowd of violent rioters... assembled on the Lower West Terrace” trying to push back a line of U.S. Capitol Police formed to act as a barrier against the mob.

Prosecutors accuse Tanios and Khater of “working together to assault law enforcement officers with an unknown chemical substance by spraying officers directly in the face and eyes” while other rioters allegedly tried to remove bike racks police were using as barriers to keep the crowd from advancing any further.

The FBI says this image from a police body camera shows Julian Elie Khater holding up a can of bear spray during the #CapitolRiot. Khater and his co-defendant George Tanios are accused of assaulting three officers, including Officer Brian Sicknick. pic.twitter.com/8AhMv5RHjW

Investigators say cell phone video shows Khater walking over to Tanios, who was allegedly carrying the two cans of bear spray and two cans of pepper spray or Mace in a backpack. The FBI says Khater can be heard telling Tanios to “give me bear sh*t,” before he reaches into the backpack. Investigators say Tanios responded by saying, “Hold on, hold on, not yet, not yet… it’s still early.” Khater is then allegedly seen emphatically telling Tanios, “They just [expletive] sprayed me,” while holding a white can with a black top that appears to be a can of chemical spray.

In an affidavit, the DOJ says three officers near Khater – including Officer Brian Sicknick, who later collapsed and died the following day – were struck by chemical irritant and had to retreat to find water. Earlier this month, the D.C. chief medical examiner ruled exposure to bear spray or any other chemical irritant played no role in Sicknick’s death.

During a bond review hearing Tuesday, federal prosecutors admitted the chemical irritants Khater allegedly sprayed into the eyes of Sicknick and his fellow officers was either pepper spray or Mace – not bear spray, as previously implied in charging documents and press releases from the Department of Justice. Defense attorney Joseph Tacopina told U.S. District Court Judge Thomas Hogan the distinction is important because it shows Khater was acting in self-defense after he was himself sprayed with chemical irritants – rather than executing a pre-planned attack on Sicknick and his fellow officers.

“He was reacting to getting sprayed seconds before,” Tacopina said, saying Khater used the pepper spray or Mace on officers roughly 5 seconds after being sprayed himself. “This shows it was not a premediated planned attack; it was reactionary."

NEW🚨 At bond hearing-attorney for Julian Khater tells judge he used pepper spray/mace (NOT BEAR SPRAY) during #CapitolRiots. Said pepper spray/mace legal in DC and he only used it in self defense. Feds had alleged he used bear spray on officers including fallen Brian Sicknick.

Assistant U.S. Attorney for the District of Columbia Anthony Scarpelli admitted after reviewing videos of the incident that it appeared Khater did in fact use a can of pepper spray or Mace against police officers, and not bear spray. Scarpelli told the judge a used can of pepper spray or Mace was recovered from each of the defendant’s homes, along with unused cans of bear spray.

Scarpelli argued the distinction should not make a difference in the eyes of the law.

“Why are they buying bear spray to go to a city? There are no bears in downtown D.C.,” Scarpelli told Hogan. “There is only one explanation why defendants are gearing up like this. They are lying in wait. They know an attack on the police line is going to happen. It's premediated violence, point blank, with a dangerous weapon on unprotected, distracted officers.”

Hogan will rule next week on whether to grant Tanios and Khater pre-trial release. Khater has proposed a highly unusual $15 million bond to secure his release from jail. Tanios is requesting he be let out on home detention and GPS monitoring.