The officer is accused of allegedly violating a D.C. resident's constitutional rights by searching him illegally and touching him inappropriately 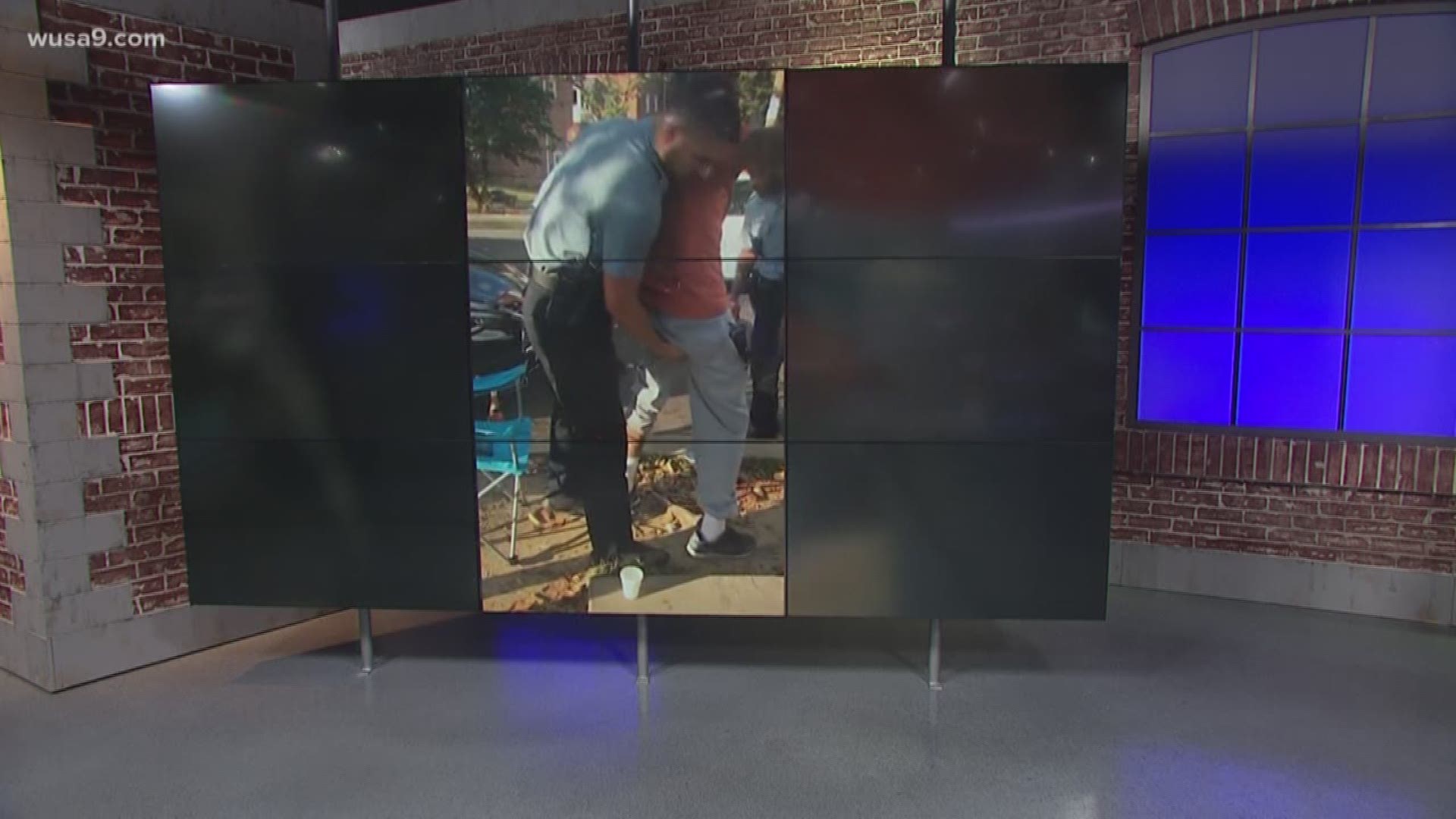 WASHINGTON — Metropolitan Police Officer Sean Lojacono is fighting his proposed firing Thursday during an appeal hearing after he was accused of allegedly violating a D.C. resident's constitutional rights by searching him illegally and touching him inappropriately. Officials later found video of Lojacono conducting a similar-type search the same day, which prompted an investigation and his eventual firing, prosecutors said.

Cellphone video shows Lojacono aggressively and intrusively searching a man near Atlantic and First streets in Southwest collected tens of thousands of views after it was posted to YouTube in September 2017 and gained traction online months later.

The video taken Sept. 27, 2017 shows Lojacono searching the man, later identified as M.B. Cottingham, who can be seen repeatedly protesting the placement of Lojacono's hands.

In Lojacono's appeal hearing Thursday, prosecutors called his searches of residents "inappropriate and a violation of their rights."

Lojacono was fired for the previously unreported incident with Richardson that also happened on Sept. 27, 2017, shortly after the incident with Cottingham according to prosecutors.

Internal affairs investigators reviewed the incident involving Richardson, in which Richardson is seen on video saying to Lojacono, "You're sticking your fingers in my ass," and that Lojacono "violated me as a man." 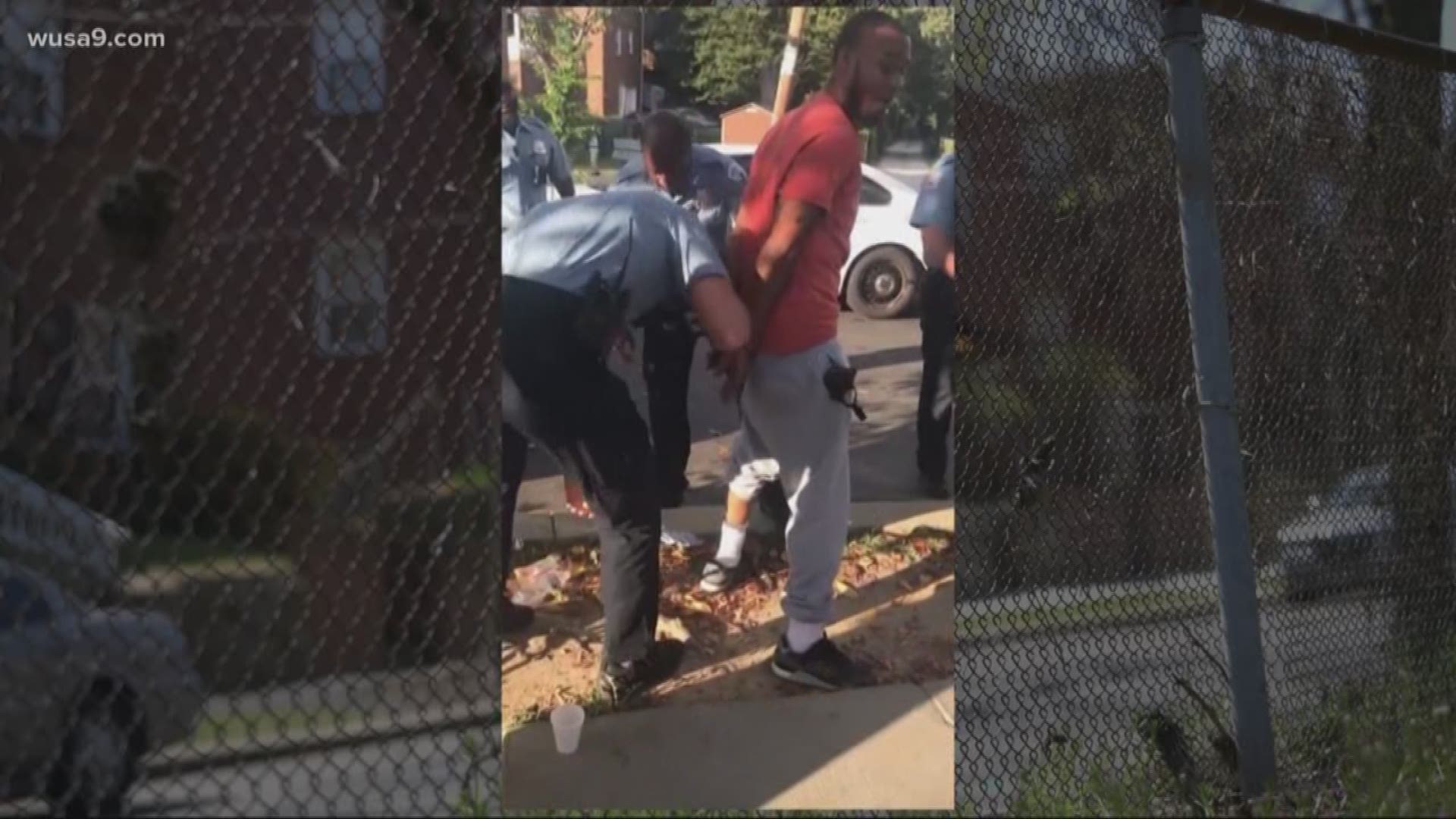 The IA investigator said Lojacono, "conducted a search of Mr. Richardson that was outside the scope of what we could consider a field search," and that even after an arrest, "any other searches near the consistency of that would be done in a confined area and not by him."

The defense argued the search was within the scope of what is allowed because the buttocks and groin area are common places for criminals to hide drugs and weapons, and that suspects hide contraband there so they can then protest an officer placing his or her hands in a private area.

The search Lojacono is being fired for came less than 30 minutes after another inappropriate search he did just blocks away. Prosecutors call the two incidents, "eerily similar."

Cottingham was not arrested, and the lawsuit resulted in a six-figure settlement paid out by the city to Cottingham.

On Thursday, WUSA9 learned commanders never thought the Cottingham search warranted to the an Internal Affairs investigation, and Lojacono’s supervisors reprimanded him at the district level.

Lojacono was removed from the Gun Recovery Unit and reassigned to the second district.

Prosecutors said Lojacono’s father, a retired D.C. police commander and former Deputy Chief of Internal Affairs with a long career and connections in the department, asked his son's commander to review the Cottingham case with the hopes of returning him to normal duty.

"The purpose of the review was to see what was going on and to see if we could get him back to NSID," Assistant Attorney General Rahsaan Dickerson said, adding that request turned out to be, "a case of be careful what you ask for."

When Lojacono’s commander went back to review the body worn camera video of the Cottingham incident he accidentally pulled footage of Richardson incident because the two were so close in time.

That incident had previously not been on MPD’s radar because Richardson never filed a formal complaint.

When Lojacono’s commander saw the way he searched Richardson, "he felt duty bound to open an investigation" despite the fact he, "is a family friend."

The commander initiated the internal affairs investigation into the Richardson incident in April 2018, two months after WUSA9 first broadcast video of the Cottingham search, and in the wake of our continuing coverage of the American Civil Liberties Union of the District of Columbia plans to sue Lojacono and D.C. police on Cottingham’s behalf.

Around the same time, D.C. Police Chief Peter Newsham faced mounting pressure from D.C. Council about the Cottingham incident and why Lojacono kept his job.

Wilhite also said that he received basic training as well as additional training before joining the Gun Recovery Unit, and that training was consistent with the manner he searched Cottingham and Richardson.

"The conduct here was consistent with other NSID and drug departments," Wilhite said. "There are other cases, other video footage of other officers with way more invasive and intrusive groin searches multiple times."

"If MPD is truly concerned about what happened to Mr. Richardson then MPD is going to have to have an overhaul all of NSID because this is what they do."

Another eye-opening update, as WUSA9 previously reported, Lojacono's body worn camera from his intrusive search on Cottingham was deleted by D.C. police when WUSA9 requested it through open records in early 2018.

The deletion happened in spite the fact that MPD has a policy that body worn camera video should be saved for 5 years when it is flagged for an investigation.

Lojacono’s defense team revealed the Cottingham body worn camera video was flagged by the department after Cottingham complained about the search. But that flag was inexplicably removed on Dec. 13, 2017, less than three months after the incident. The video was deleted two weeks later.

It is unclear if the deletion was an automatic system purge, or done manually.

However, the body worn camera video from the Richardson case, from the same day and officer, still existed when that internal affairs investigation was opened four months later.