Here are the DC playgrounds contaminated with lead 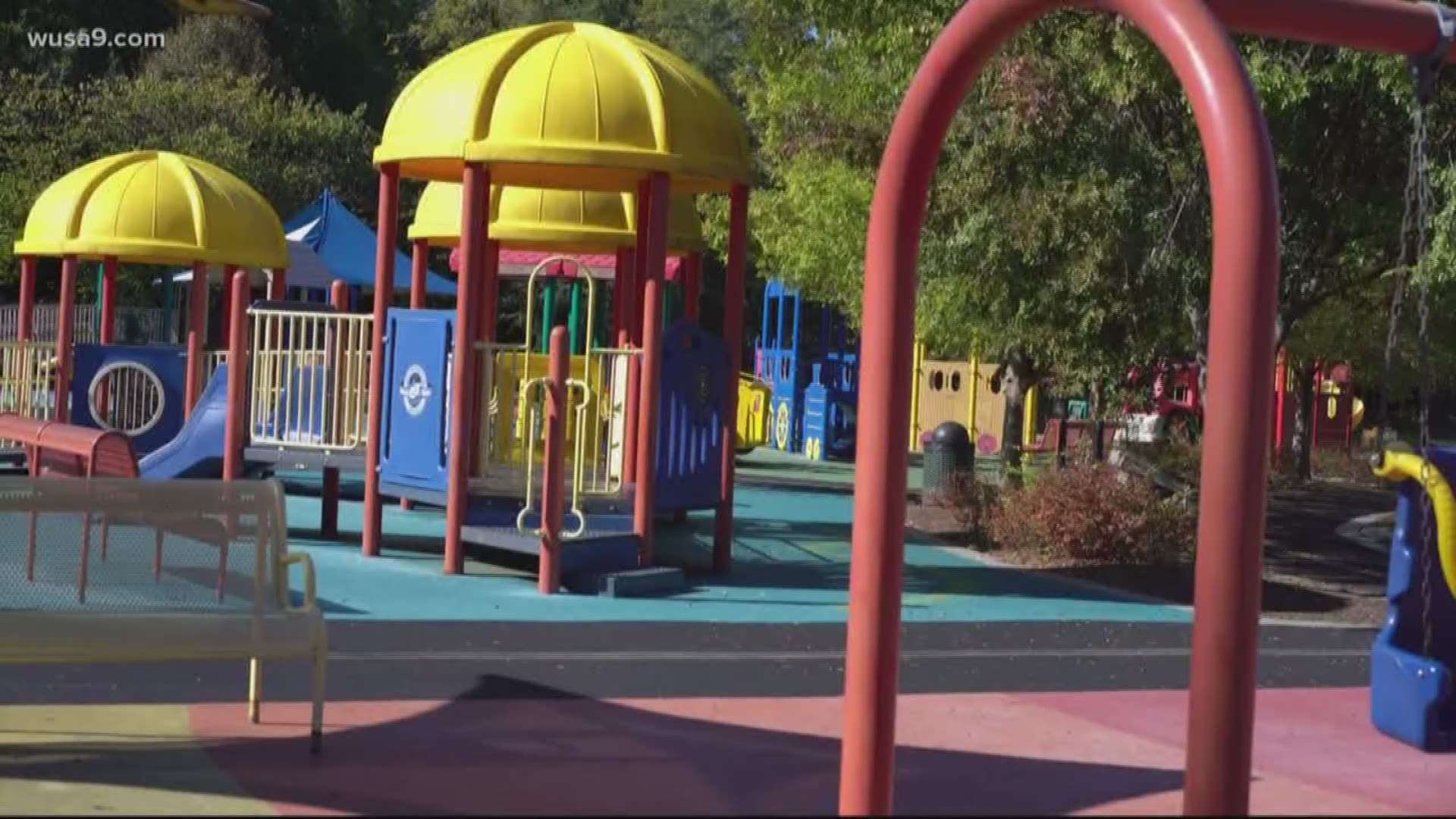 "What we found was there was no lead in the actual components of the PiP-- (Poured in Place crumb rubber) the lead was contained in the dye, or the pigment, or the paint that colored the poured in place," Anderson said. "Whereas we may have solved for any runoff it [lead] could come from somewhere else. We want to make sure that we continue to maintain these playgrounds, we continue to HEPA vacuum them and power wash them."

Speaking about initial test results since May indicating elevated lead levels at multiple D.C. school playgrounds, Anderson replied, "We really appreciate the work that the Ecology Center performed. And we understood their results."

D.C. DGS pledges to continue power washing and vacuuming playground at schools and parks for possible lead exposure "at least twice a year." 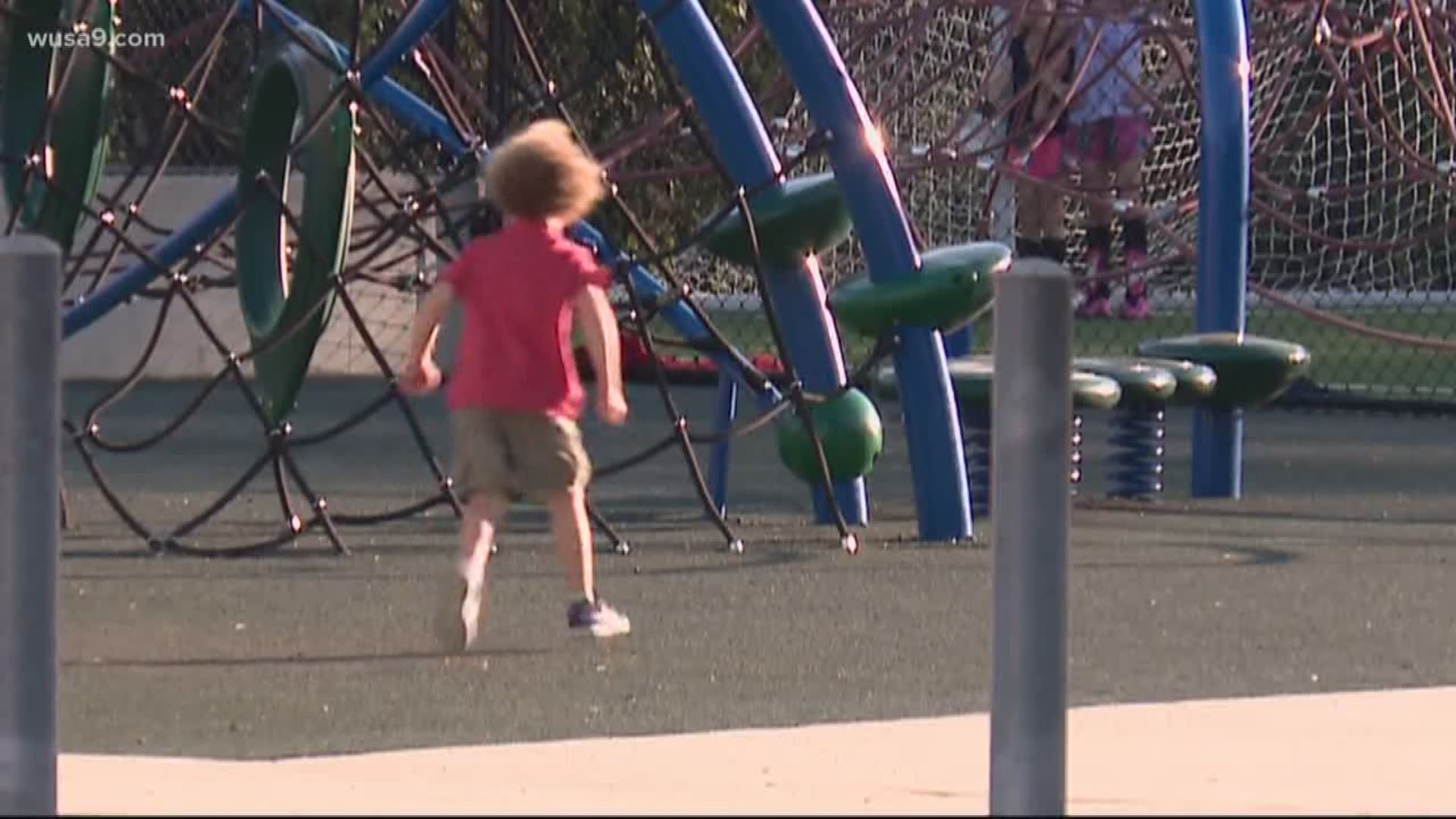 Further parental complaints to the DC Council compelled the city's Department of General Services to commission studies of its own. Those results, anticipated for months by DC Councilmember Robert White, were released late Friday night.

18 playgrounds identified as having lead levels above the acceptable levels of 400 parts per million have been vacuumed, pressure washed, and re-evaluated according to the report. The vacuuming efforts were able to collect and dispose of chunks of rubber that may be picked up and ingested. This reduced the lead hazards from ingestion of the loose PIP rubber chunks, according to the report.

Playgrounds that came back as positive for "actionable" lead levels:

The report also estimates how lead is entering the playground's rubber mats:

This report written by testing firm SALuT is more than 2,000 pages long. Here is a summary of some key findings:

These playgrounds are targeted in the report as "very age-worn with multiple patches, cracking and degradation. It was understood that these playgrounds will be demolished." The report recommends that if the playground "is not demolished, it is recommended that a lead risk assessment of nearby building exteriors be conducted and remove or otherwise stabilize any identified lead-based paint. Additionally, it is recommended that a thorough pressure washing be conducted using the methods and protocol described in the final report."

The report had this to say about the daycare playground: "It was placed up against the building and fenced around the remaining perimeter. There wooden windows above the playground that has lead-based paint chipping off onto the playground. Additionally, there are extensive white stains below the windows that have been identified as having very high levels of lead that is leaching from the window sills. These stains wipe off easily and can readily get onto hands, clothes, or other skin parts of children. The black fence partially surrounding the playground has lead-based paint coating that shows a large amount of flaking and peeling. These lead chips find themselves on the playground as well. The lead paint chips and the leachate are getting into the rubber playground as evidenced by the highly elevated levels of lead in the bulk rinsate. While the wipe testing of the mat did not indicate accessible lead on a playground in good condition, it would be highly probable that these high levels of lead would readily become available if the rubber playgrounds surface becomes damaged. It is recommended that the playground be removed, the area thoroughly cleaned and replaced with a lead-free rubber playground."

"Sources of lead that most likely are causing the playground contamination include the school buildings wood window sills, facia, wood doorways, etc., that contain lead in the paint. Lead was also detected in the paint of the cast-iron roof drain pipes, on the white staining on bricks of the walls beneath the lead-containing painted wood. This is highly likely due to leaching of the leaded paint down the sides of the building and onto the asphalt pavement. Additionally, the two metal benches between playground A (northern) and the school building contain lead painted metal. However, recent testing of these types of lead paint and other lead-containing playground equipment indicates that those sources of lead are stable and are not collectible by wipe sampling. This is a high indication that the lead in the equipment will not come off in children’s hands, shoes, clothes, etc. and do not pose a significant health hazard under most conditions and uses."

Credit: DC DGS
DC DGS report illustrates a theory of how lead comes from building paint flakes into the playgrounds

No Department of Parks and Recreation playgrounds tested positive for lead according to D.C.'s report. It adds that all were tested.

This is a developing story and more will be added in the coming days.