The first quarter of the school year will be conducted with distance learning and then students would be phased back in beginning with elementary school students. 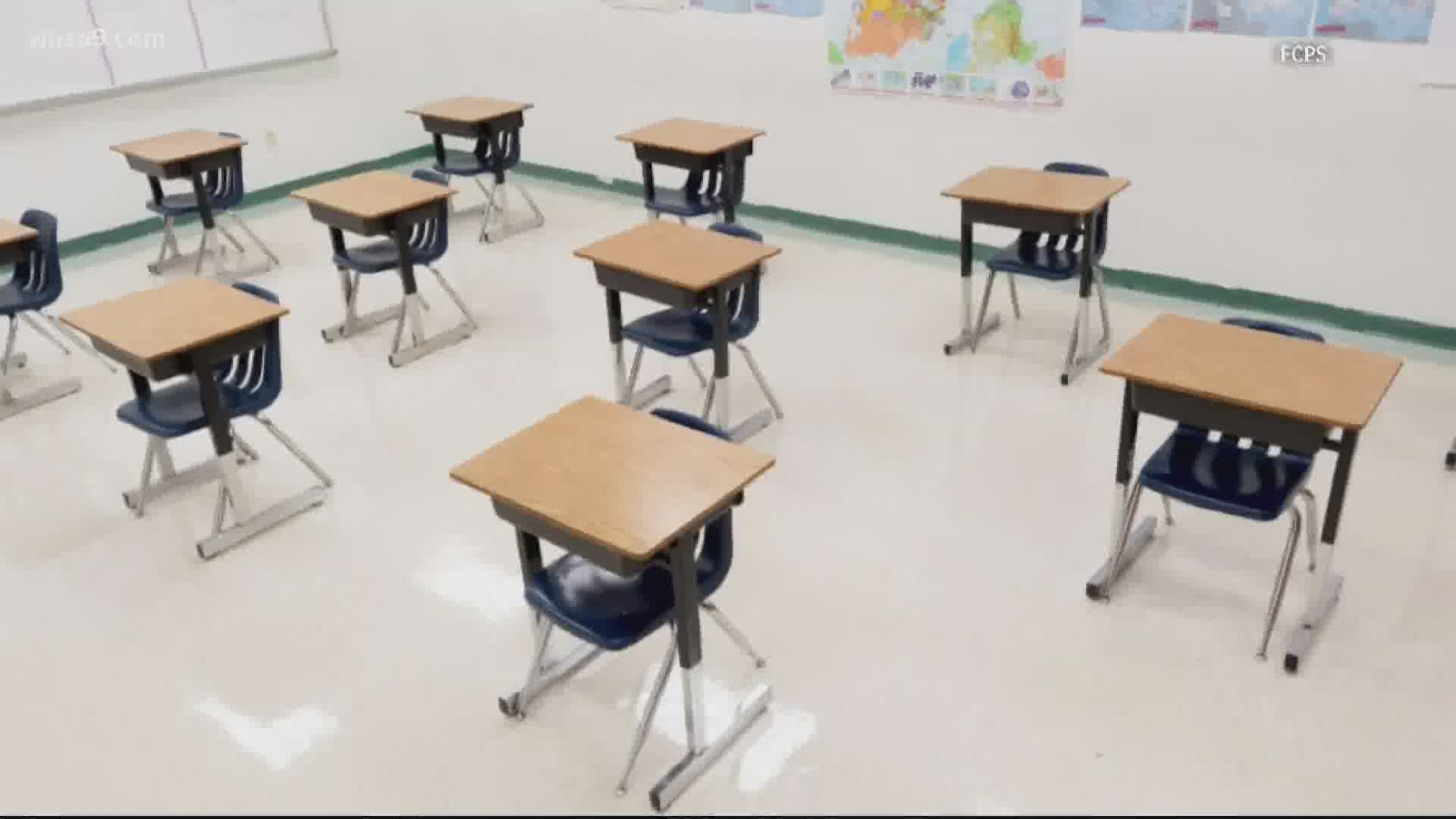 Superintendent Dr. Scott Brabrand made the virtual recommendation Tuesday, and the school board agreed to accept his proposal, allowing the superintendent to move forward with his plans.

The first quarter of the school year will be conducted virtually, with a reevaluation prior to the end of the quarter. Schools would then phase students back in, no earlier than the second quarter, beginning with elementary school students, select special education and ESOL learners spanning all grade levels PreK-12.

"Our priority remains to establish a safe in-person learning environment for students and staff," Brabrand said during Tuesday's work session on reopening schools.

Beyond the change in case rates across the country, FCPS officials said the lack of rapid testing available in Fairfax (5-7 day wait for test results) and higher than normal leave of absence requests from staff (double this year) as factors in the decision to recommend virtual learning.

The School Board also passed a motion, requesting that the superintendent provide them with comprehensive metrics that would indicate if and when it is safe to welcome students back to class so that they can better plan for that transition.

“We are pleased FCPS is putting students and staff safety first and listening to the science, educational experts and our community by opting for a 100 percent virtual start," Tina Williams, president of the Fairfax County Federation of Teachers, said. "Everyone, but nobody more than our educators, want to open schools and get all kids back as quickly as possible, but we must open schools as safely as possible. Unfortunately, the health crisis doesn’t make in-person classes possible right now."

#BREAKING: The @fcpsnews School Board just agreed to accept @FCPSSupt's proposal to begin the school year virtually, meaning he can proceed with those plans.

So, looks like students will not be going back to the classroom in September. @wusa9 #ReopeningSchools pic.twitter.com/PXfRjc0WJG

Teachers who have been pushing to start virtually celebrated the news Tuesday.

“I’m grateful actually as an education professional and a parent to hear that change of course," FCPS music teacher and vice president of the Fairfax Education Association Carla Okouchi said. "There are just so many unanswered questions at this point in time, and we are not out of this pandemic.”

One of her most pressing questions includes funding for PPE, to make sure that teachers who do eventually have to re-enter the classroom don't have to purchase their own equipment. Another concern involves the availability of contact tracing.

"We want to make sure that we have contact tracing at every single site," she said. "That is huge and it’s work that needs to be in place.”

As of June 29, FCPS had announced two options for enrollment: in-person or full-time virtual, giving students and staff a choice.

For parents who had selected the in-person option for their student, like Suzie Roulette, the sudden switch took them aback.

“I was disappointed by today’s decision overall, because I feel like I’ve been strung along with getting my input for the surveys," Roulette said. "Disappointed in the fact that they didn’t seem like they really cared to hear from us considering it was at max three business days that they went through and just they kind of just pulled out the rug from under us."

Her daughter was planning to transfer to FCPS from private school this year. Now, she said they're pursuing other options.

Parent Diane Cooper-Gould also expressed frustration at the fact that her family had to agonize over a choice, just to have the decision made for them. But, she had selected virtual learning for her two children, and believes it's the safest option for them right now.

“It was a pretty grueling choice," she said. "Really emotionally difficult to make. I think it was difficult for most families out there."

Both of her students have IEPs, or receive some level of special education attention. One was craving a return to class, while the other preferred to remain home.

But, Cooper-Gould has a chronic medical condition, and her doctor said her children returning to school would put her at serious risk.

After watching some of the tension between the superintendent, school board members, and the public health officials, she's hoping they can unify in a decision and focus on the future.

“All of our kids across the nation are going to have this learning deficit or these lost months," Cooper-Gould said. "For me, it seems most important that we recognize it and deal with it as a community and give people the best support we can with what we have, which unfortunately is not ideal and then move forward instead of bemoaning what could have happened, what should have happened.”

The Fairfax County Federation of Teachers sent FCPS officials a letter on July 17, requesting the district switch to a 100% virtual start and added that neighboring districts have already decided to start with distance learning for their start to the school year.

“We all want to be back in school with our kids, but at this point, we don’t feel like we can do it safely by September 8," FCFT Executive Board Member, Emily VanDerhoff said. "I feel like there’s going to be a lot of inconsistencies.”

“FCPS is deeply appreciative of the efforts, the work, the collaboration and the commitment of FCPS teachers and support personnel. Their roles are crucial to the success and well-being of students across the division and their voices are being heard. We will continue to prioritize the health and safety of our students, staff, and community in developing our return to school plans.”

School officials acknowledged that neighboring districts are selecting varying return to school plans, which can be difficult for staff and faculty who may teach in FCPS, but live in a neighboring county. According to FCPS data, one-third of its employees live outside of Fairfax County.

Both Arlington Public and Manassas City Schools have announced they will start solely with distance learning, but Loudoun County is planning to offer a mix of in-person and virtual learning.

FCPS teacher Robyn Mejia said the differences in district responses make it difficult for families like hers. She works as a teacher for FCPS but lives in Frederick, Maryland, which is where her two children go to school.

Frederick Schools has yet to release its reopening plan.

“What about my kids? Are they virtual or in person, and how does that affect my day care?” Mejia asked.

In the meeting Tuesday, Dr. Brabrand said they are exploring daycare options for teachers as part of the move to a fully virtual option. 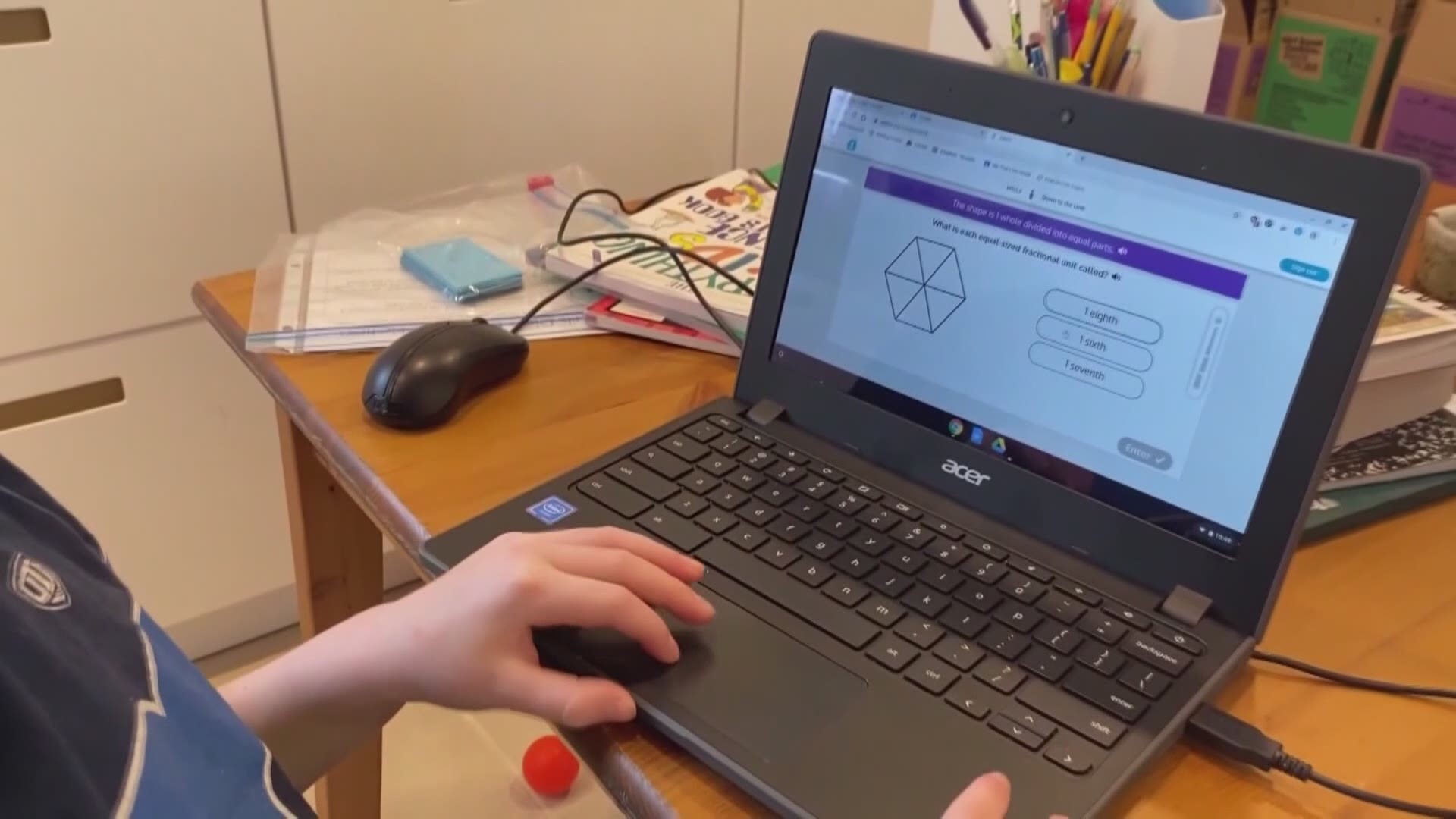