The District's favorite blossoms are now in peak bloom! 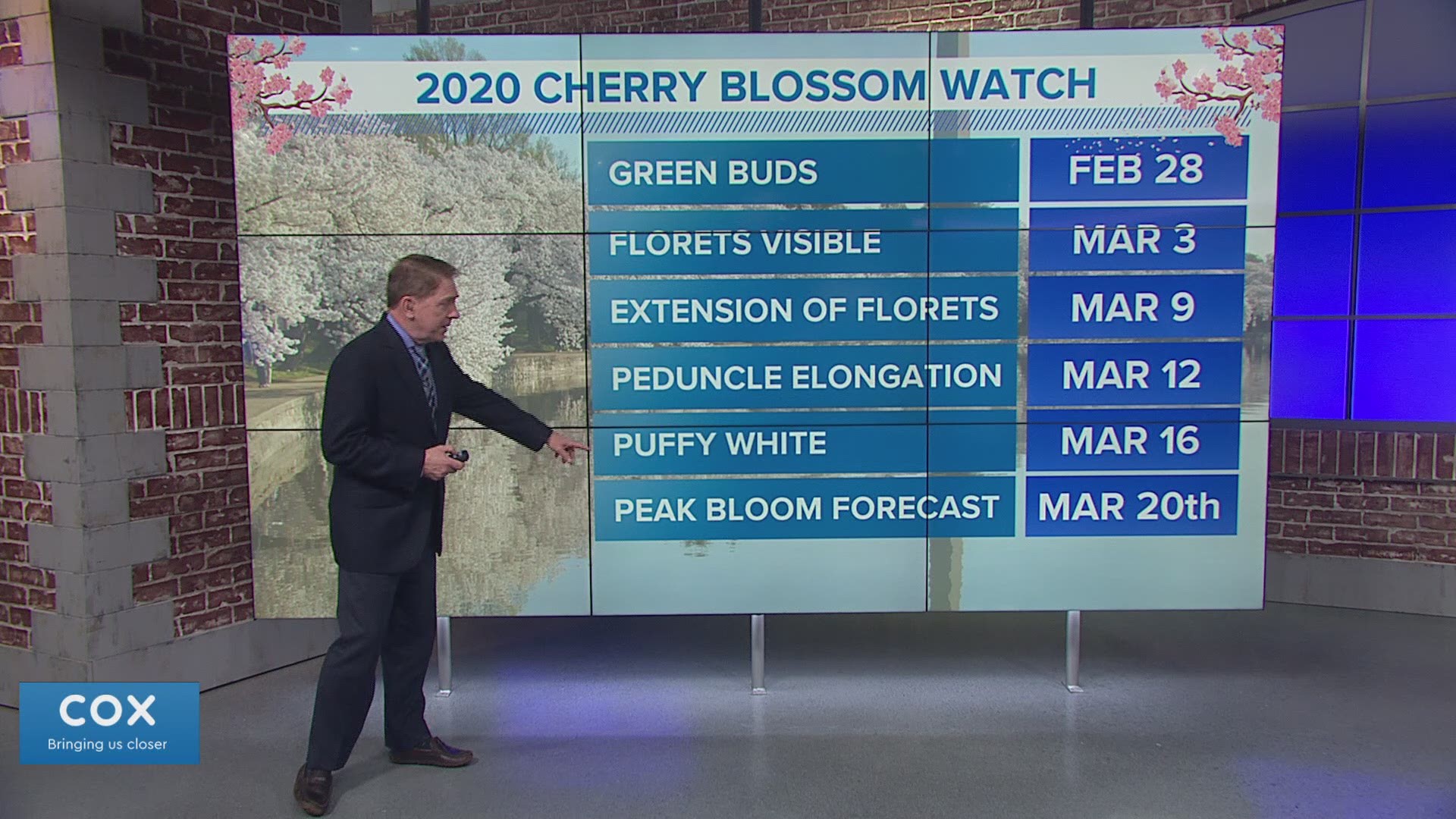 We are in full bloom in D.C. The cherry blossoms have reached peak bloom!

This is when 70 percent of the Yoshino cherry trees at the tidal basin reach peak bloom.

The National Park Service sent out a tweet at 9:14 a.m. Friday making the announcement.  They are reminding everyone that they can view the beautiful cherry blossoms on the new Bloom Cam .

The Yoshino cherry blossom trees around the Tidal Basin reached green bud, the first of six stages culminating in peak bloom, on February 28, which is six days earlier than in 2019. However, it is several days later than the green bud stage was reached in 2017 or 2018. On Tuesday, March 3rd they reached stage two: florets visible. Last year the second stage was not reached until March 17th. This was followed by stage three: extension of florets, on March 9 and stage 4, Peduncle Elongation was reached on March 12.

WUSA9 Weather Team says our mild winter will lead to an earlier peak bloom period, possibly before the Cherry Blossom Festival even begins on March 20. In 2019, the blossoms had green buds by March 5, but didn't reach peak bloom until April 1 thanks to a mid-March cold snap.

On Tuesday, March 10, the 'indicator' tree was in full bloom. According to the National Park Service, peak bloom for the rest of the trees occurs within two weeks.

Finally, on Tuesday, March 16th, the final stage before peak bloom was reached. The majority, 70%, of the cherry bloom trees are now in the "puffy white" stage.

Here's a recap of things to know about DC's Cherry Blossoms:

1. Forecasting peak bloom is almost impossible ten days in advance, according to the National Park Service. This means the initial forecast of March 27th to March 30th has been modified and updated.

3. The cherry blossoms are highly dependent on the weather. Warmer spells can speed the bloom process up. Colder weather can slow it down.

RELATED: How climate change is changing when the DC cherry blossoms bloom

RELATED: Meet the team behind the Cherry Blossoms 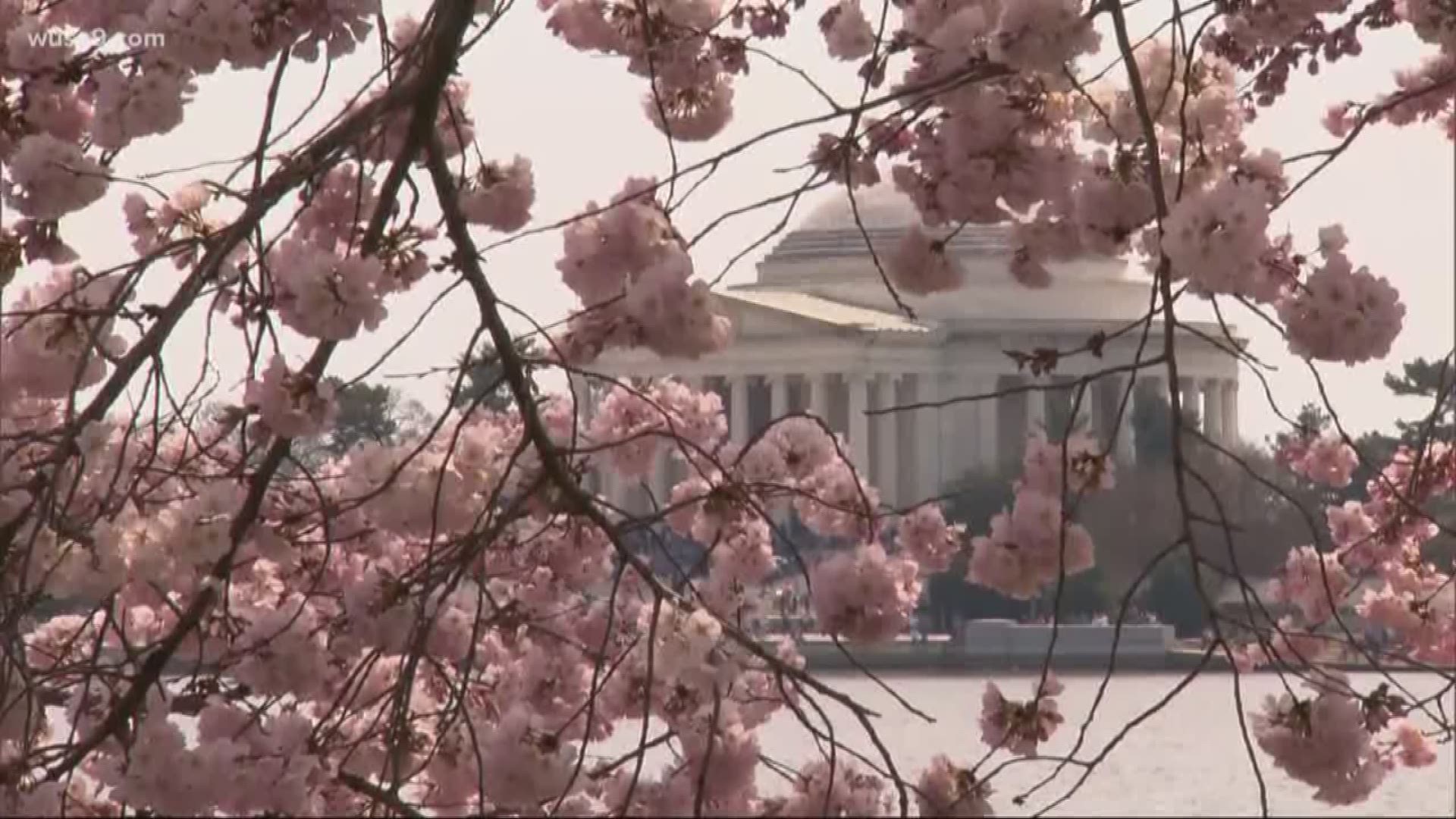 DC's Weather is crucial for the progression to "Peak Bloom"
Just like all flowers in spring, the weather impacts the process. It can ruin the blossoms if it's too cold or windy and it can speed up or slow down how quickly we reach peak bloom.

If a streak of several warm days happens, the process moves along quicker. Similarly, in the early stages, colder weather can slow the process.

What can be detrimental to the blossoms in their final two stages are cold weather and wind. Once the blossoms reach puffy white, they are more exposed and cannot tolerate cold or windy conditions.

If the temperature at the Tidal Basin drops below 28 degrees in the last five to seven days before peak bloom, the blossoms can be damaged or killed. This happened in 2017, when roughly 50% of the blossoms were lost during a cold snap.

Where did DC's Cherry Blossoms come from?
The 3,200 Yoshino cherry trees were a gift from Japan over a century ago to commemorate the friendship and relationship between our two countries. Cherry Blossoms are Japan's National Flower, symbolizing hope and peace.

Every year, they bring hundreds of thousands of visitors to the Tidal Basin. It really is an amazing sight!