DC just had its warmest decade on record

2019 was the second wettest year in the United States, according to the National Oceanic and Atmospheric Administration.

WASHINGTON — If you think temperatures have been feeling warmer in the last 10 years, you wouldn't be off base. The last decade in Washington, D.C. was the warmest on record, according to data from Climate Central.

Here are a few weather and climate trends that we have noticed about D.C. in the last decade: 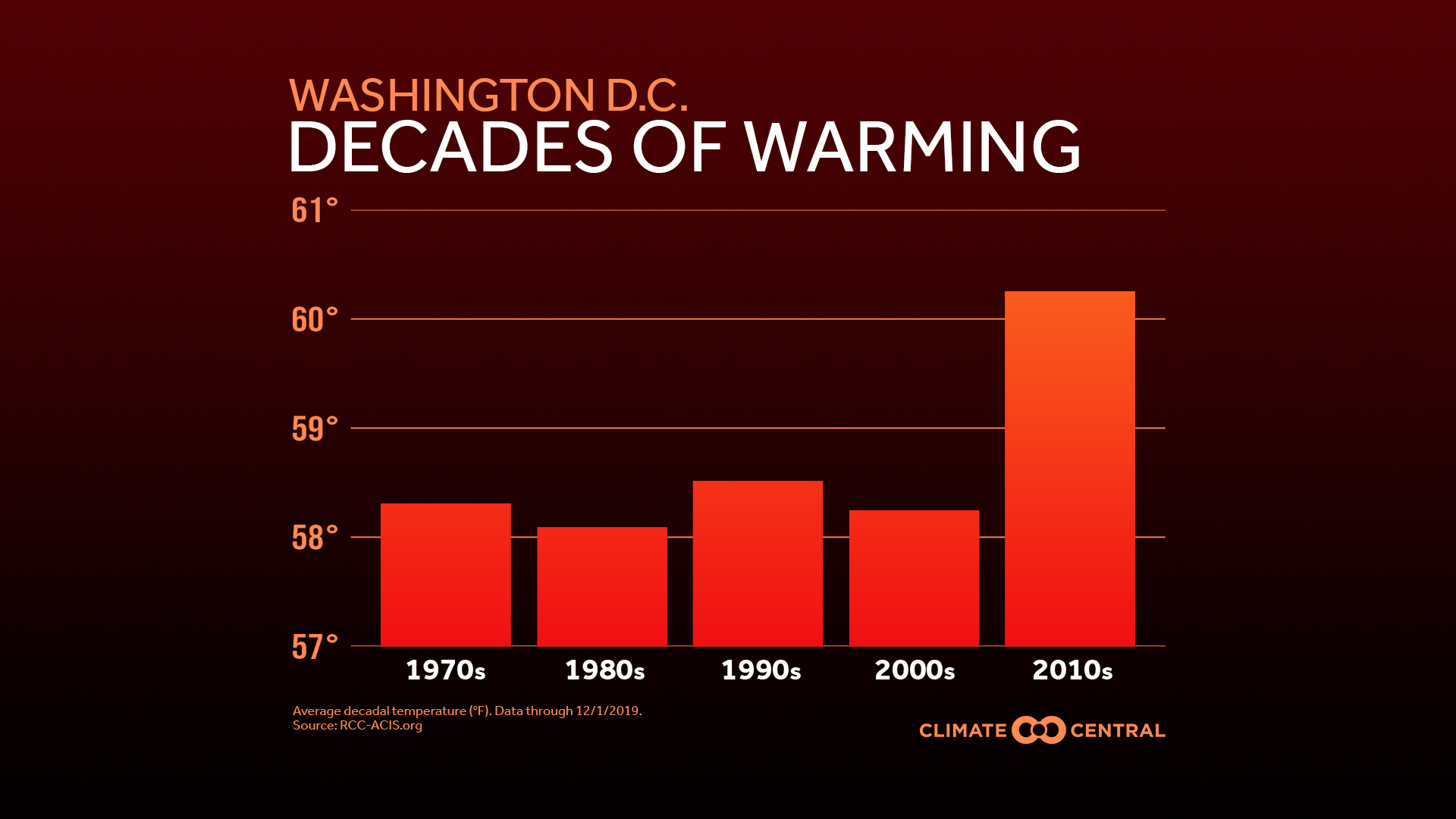 Warmer temperatures fall/winter:
Looking back at NOWData D.C. has experienced temperatures well above average in the fall and winter months. For the previous two years, D.C. has reached temperatures in the 90s in October.

So it's warmer, now what

Warmer temperatures have already brought some notable changes to D.C.

Cherry Blossoms: The average first date of cherry blossoms peak bloom is now April 1st, according to Climate Central. Data was analyzed from 1981 to 2010.  The previous average peak bloom date was April 6, with data analyzed from 1931-1960.  The National Park Service noted that D.C. is warming an average 1.6  degrees Celsius per century.  Earlier bloom dates could put cherry blossoms at risk for damage.  For example if you get a few warm days in February followed by a shot of very cold air, trees may become damaged.  As the trees are flowering early, they are vulnerable to cold air since it's still winter.

Mosquitoes: A warmer climate in D.C. means a better habitat for bugs and insects, some of which carry diseases that are a threat to our health.

The data for D.C. shows that on average the city is experiencing five additional mosquito "Disease Danger Days", compared to a half-century ago.

Scientists believe that warmer temperatures will contribute to more people being at risk for contracting mosquito borne illnesses, such as Dengue, Zika virus, Chikungunya virus and West Nile. Warmer weather gives mosquitoes a better environment, more time to transmit diseases and new locations to thrive in.

RELATED: DC has hit 90 degrees 62 times this year and closing in on the all time record

In terms of temperatures, 2019 was the coolest year across the lower 48 states, since 2014. Despite, the cooler year the temperatures were still above average. Last year, the average temperature in the U.S. was 52.7 degrees, which is  0.7 of a degree above the 20th-century average, NOAA officials said.

Georgia and North Carolina each saw their hottest years on record, while Alaska continued to see record warmth with the state's warmest year on record.

The 2010s showed a trend of an increasing number of billion-dollar flooding events.

In 2019 alone, NOAA reported 14 weather and climate events which cost more than 1 billion dollars each. These include Hurricane Dorian and flooding in Missouri, Arkansas and Mississippi River flooding.

RELATED: Here are the top 5 weather events of 2019 around the DMV