Group of drivers does donuts on Beltway, stops traffic

A couple who captured one of the viral videos Saturday said cars were stopped on the Beltway for miles as multiple cars did donuts on the inner loop of I-495. 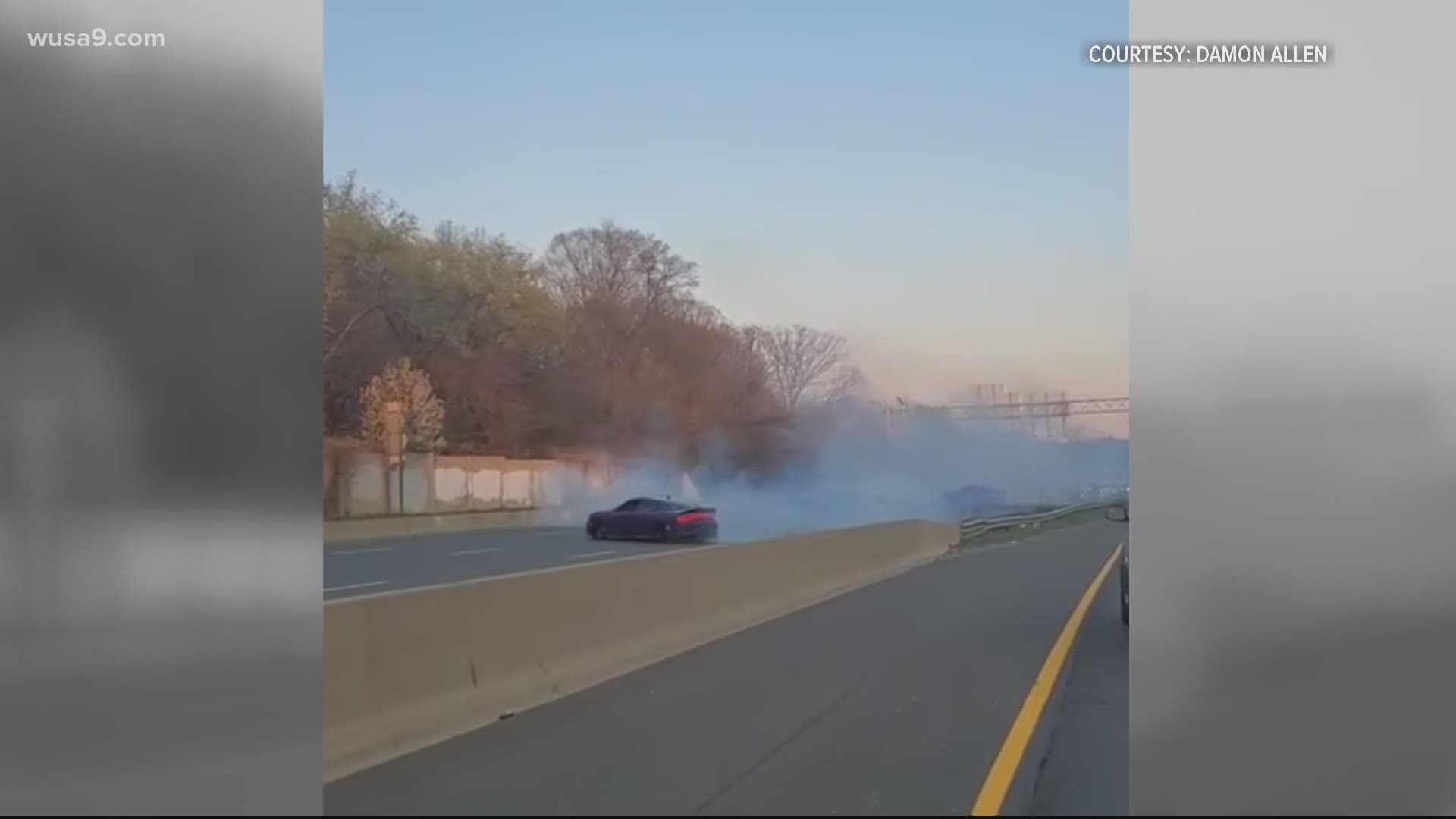 PRINCE GEORGE'S COUNTY, Md. — A group of drivers stopped traffic Saturday evening, as they did donuts in the middle of the Beltway.

As Maryland State Police troopers were responding to that call, they said they were re-routed to Route 212 for reports of similar behavior. Once on scene, police said they identified an orange 2020 Dodge Charger being "operated recklessly." MDSP said they charged the driver with six traffic citations, including reckless driving.

In a news release, MDSP identified the driver as 20-year-old Jonathan C. Iraheta from Beltsville, and said he's been charged with traveling 90 mph in a 35 mph zone, reckless driving, negligent driving, aggressive driving, following too closely, and unsafe lane change -- totaling more than $1,800 in fines.

Police said at around 7 p.m. Saturday, the College Park Barrack received multiple calls reporting drivers in high-performance cars blocking the road and spinning wheels on the inner loop of I-495 near Rt. 1.  A trooper was immediately dispatched to the scene and allied police agencies were called to assist, according to the news release.

While the trooper was responding, Prince George’s County Police received a call reporting the group was now on Rt. 212, according to MDSP. Police said the trooper then headed that way and discovered an orange 2020 Dodge Charger driving recklessly on westbound Rt. 212 at I-95.

Police said the trooper stopped the car, driven by Iraheta, and issued the traffic citations. He also noticed that the temporary tag on the car had been altered to try to conceal the actual tag numbers, so police said they confiscated Iraheta's vehicle to investigate.

RELATED: DC community leaders call for safety upgrades to Georgia Avenue after 4-year-old hit and killed by a car

🚨VIDEO🚨Damon Allen took this video Saturday evening of multiple drivers doing donuts on the Beltway, and holding up traffic - he says - for miles.

Hear from Allen on @wusa9 at 6. pic.twitter.com/B4OAtzNZmK

Damon and Tania Allen said they were driving home from visiting friends at the Bishop's Garden at the National Cathedral Saturday afternoon, heading westbound on I-495 South, when they noticed smoke on the road.

"We really thought there was a car fire on the Beltway," Damon Allen said. "We had no idea what was going on, until we saw the three cars doing donuts in the middle of the Beltway."

He said it looked to him like traffic was stopped for miles behind the stunt cars, as cars heading in their direction slowed to watch and take videos -- as his family did.

"It was a little astonishing. I couldn't believe that people were actually so organized, to be able to stop the traffic, and to have the three stunt cars, doing their donuts, and actually not crashing into each other," Tania Allen said. "But also, if there was an emergency...I'm a mom of three and just the thought of if someone needed to get to a hospital or if they were trying to get to work, just the type of inconvenience that was caused by this."

Damon Allen called the incident "exciting and concerning" and said he was glad no one was injured.

Chrissy Nizer, administrator for the MDOT Motor Vehicle Administration, said they have seen more people driving at an extremely high rate of speed during the pandemic -- as there have been fewer cars on the road.

“There have been a few high profile incidents of these kind of dangerous driving behaviors," Nizer said. "Obviously it's not safe to do anywhere, whether it's a major highway or secondary road. Driving is not about acrobatic stunts. It requires your full time and attention.”

As more cars get back on the road this Spring, Nizer urges drivers to slow down.

Maryland state troopers have been involved in multiple enforcement operations with county and municipal police aimed at speeding and reckless driving in the Washington Metro region in recent months, according to MDSP's news release. Police said they have issued hundreds of citations during these initiatives.

"Obviously, driving behavior witnessed on the Capital Beltway and Rt. 212 yesterday is unlawful, dangerous and a complete disregard for the safety and convenience of others on the highway," the Maryland State Police said in the release.

MDSP said it will continue enforcement initiatives of similar incidents.