'We are being objectified' | Police called to boy's bus after he kept removing mask, mom says

Chioma Oruh's two sons have autism. She said this incident shows the need for better supports when working with students who have special needs. 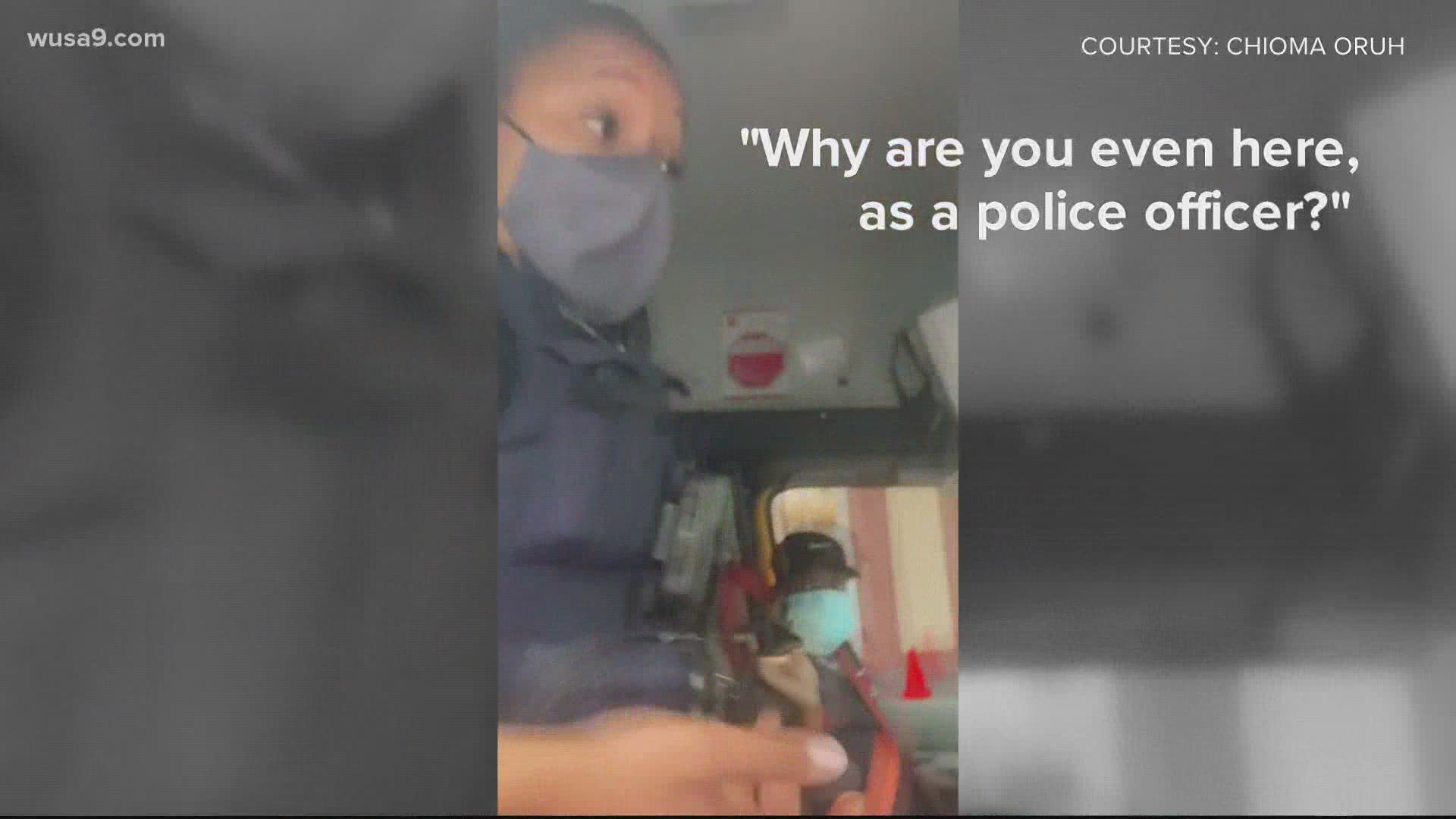 WASHINGTON — A D.C. mom is outraged after she said police were called to her sons' school bus Friday when the youngest of her two sons kept taking off his mask.

“It's traumatizing for all of us," Chioma Oruh said.

Oruh said both her seven and 10-year-old sons have autism and go to a special nonpublic school in Rockville, called Sheppard Pratt. The family lives in D.C., however, so the District's Office of the State Superintendent of Education provides their transportation.

On Friday, before the bus left her neighborhood, Oruh said she noticed that it had stopped. She went outside to check why it had pulled over, and she said the bus attendant told her that her youngest son, Jideofor or "Jedi," kept taking off his mask.

She said the attendant told her that violated their protocol and asked her to take him off the bus — which Oruh refused to do.

She told the attendant and bus driver that she had a doctor's note for both sons that she submitted on March 11.

The note reads in part, “he should not be excluded or sent home if he refuses to wear the mask as long as he remains symptom-free and has no known COVID contacts.”

RELATED: Pandemic proves extra difficult for those with developmental disabilities

In the video, viewers can see the bus driver on the phone with who the driver says is the dispatch manager. They can be heard saying, "we have nothing on file."

Oruh said she soon found out it was dispatch at the OSSE Division of Student Transportation that called the police.

🚨@ChiBornfree took this video of police being called to her sons' bus Friday - after she was told her 7 y/o kept taking his mask off.

Her sons have autism & she says this shows we need better supports for kids w/ special needs that don't include police.

That on @wusa9 at 7. pic.twitter.com/KzcnJwl1xY

“I don't even understand the mentality that says the police is the right party to intervene," Oruh said.

The Superintendent's Office sent us the following statement in response to the incident:

"Whenever there is a situation in which law enforcement interacts with our families, we share the concern of the community. Yesterday, the Office of the State Superintendent of Education (OSSE) was made aware of such an incident on one of its OSSE Division of Student Transportation (OSSE DOT) buses. OSSE immediately opened an investigation of the incident and has been in communication with the family.

OSSE DOT is committed to providing safe, reliable and efficient transportation services to DC students, in accordance with all health and safety guidance, and doing so in a way that meets the individual needs of the children in our care."

“Our children deserve health care interventions, right? therapeutic interventions," Oruh said. "It's bigger than my family, even though it's very personal to my household, and my children's emotional health, and their sense of dignity. This is not the worst possible outcome, scarily, and unfortunately, I get to kiss my baby to sleep. He's still with me."

D.C. Councilmember Robert White reached out to Oruh after commenting on her video on Twitter. He shared the following statement with WUSA9 Monday:

Driver safety is an important issue, and not to be dismissed, but this situation should not have happened to a seven-year-old child. I’m grateful for the calm demeanor of the responding officer, but at some point we must move away from using police to settle civil matters because of the dangers it presents — trauma and possible escalation of situations that shouldn’t involve law enforcement. It's beyond time for the District to have a serious discussion about this and how we will create a restorative justice process for the family."

"Calling law enforcement on a 7-year-old child is alarming and wrong. Parents need to be able to trust that their kids will get to school safely, but this event calls into question both the training and protocols that are in place. I reached out to OSSE soon after hearing about this. It is important for OSSE to investigate the incident thoroughly and takes measures to prevent it from happening again."

Oruh said she has been pushing for better supports for students with special needs for years — and throughout the pandemic. She said now, though, she has an example on video, proving that point.

"We are being objectified. We spent a whole year invisible to the system. And we've needed support, we needed health care support, we needed educational support," she said. "We got distance learning and the stopping of health care services in the home because of the pandemic. And, so now you expect a child who's literally got no support to learn how to do these things, to execute a behavior that even some adults don't know how to do."

Oruh said she is working with other community advocates to plan a rally for next week.