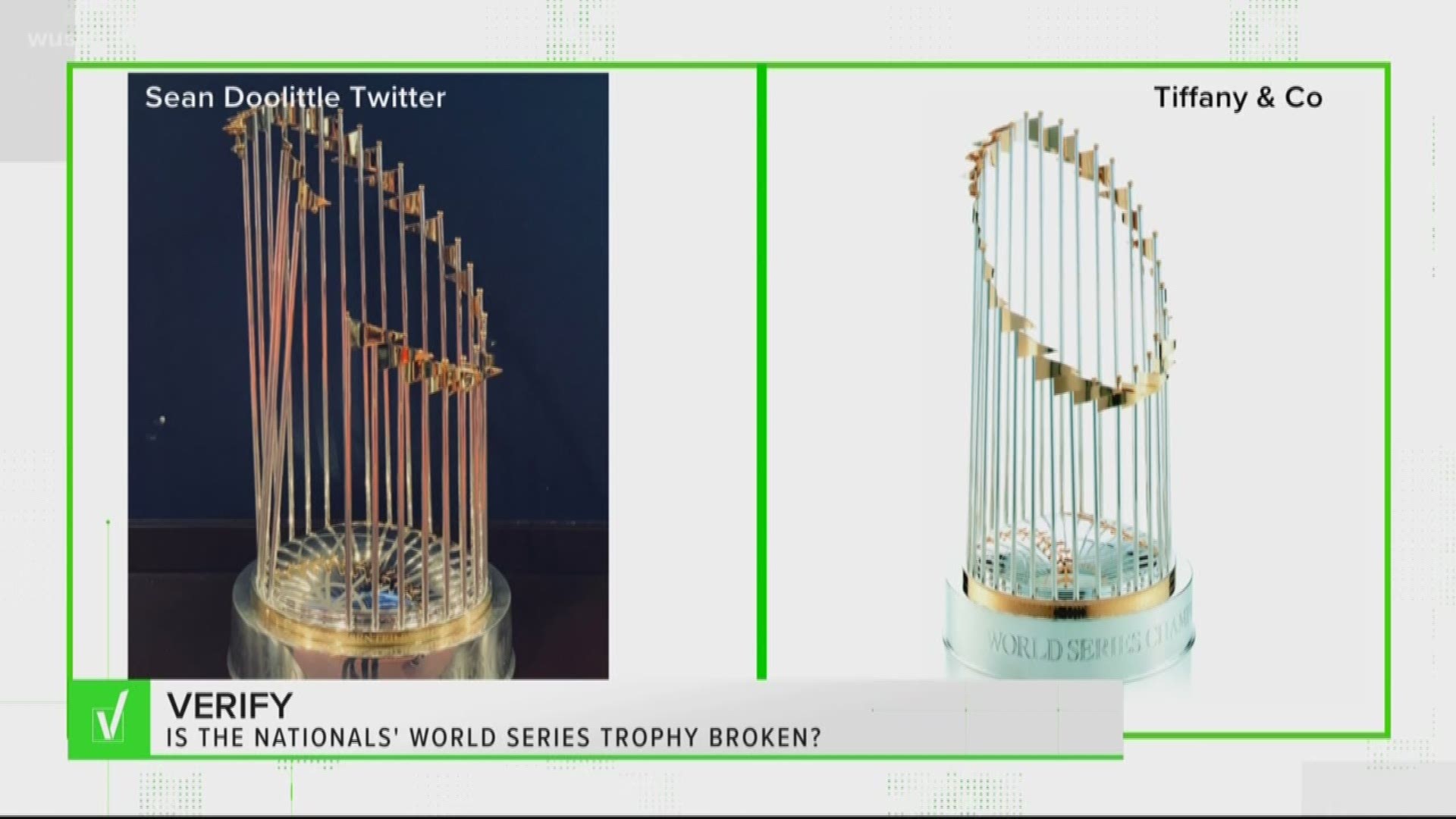 Yes, and Tiffany & Co. is flying in a silversmith from their workshop in Rhode Island, to fix the trophy before Saturday's parade.

For winning their first title in franchise history, the Washington Nationals have a lot to celebrate, and our heroes did not hold back.

We asked our boys to bring home the trophy, and they did not disappoint. Only thing is, it might not all be in one piece.

There’s lots of speculation about whether the Commissioner’s Trophy broke during all the hubbub.

So we’re Verifying: is the Nationals World Series trophy broken?

Our Verify researchers began looking at a collection of photos all posted within six hours of each other on Oct. 31.

Sean Doolittle tweeted out this photo of the trophy with two silver flags bent and three completely ripped off.

Several players and their spouses tweeted out photos from the plane, with the same destroyed trophy.

Good thing, each winning team gets a new Commissioner's trophy every year, made by Tiffany’s & Co. Here's what the trophy looked like before it (and the team) got smashed.

The sterling silver trophy weighs about 20 pounds and stands 24 inches high with a diameter of 11 inches, according to a Tiffany's spokesperson. It takes about three months to make.

A Major League Baseball spokesperson confirmed that each team only gets one trophy to celebrate with.

"Each year a new trophy is commissioned for the team that wins the World Series," an MLB spokesperson said. "That is the trophy that the team keeps."

A spokesperson for Tiffany & Co. said they're flying in a silversmith from their workshop in Rhode Island, where the trophy was made, to the National's office to ensure the trophy is ready for Saturday's parade.

Last year the trophy was damaged during the parade by a Boston Red Sox fan who threw a beer can at a player passing by, but missed and knocked off several silver flags.

Back in 2018, a spokesperson said the trophy’s damage was minor and was being repaired, according to a Washington Post report.

So we can Verify, yes the Nats partied hard and it shows. But Doolittle reassured, it'll be good as new for Saturday's victory lap.

Anthony Rendon confirmed to WUSA9 reporter Eric Flack that there are in fact missing flags . He said there's a couple missing during the Nationals World Series parade on Nov.2.

""The next morning I get on the plane and there's about four or five flags missing," Rendon said. "I have some suspicions on who it might have been, but I won't name names."

RELATED: Here are the expected parking and traffic restrictions for the Nats World Series parade

RELATED: Not a jinx: The World Series trophy presentation was rehearsed both in DC and Houston