In America, the evolution of LGBTQ+ people fighting for their rights is complex. 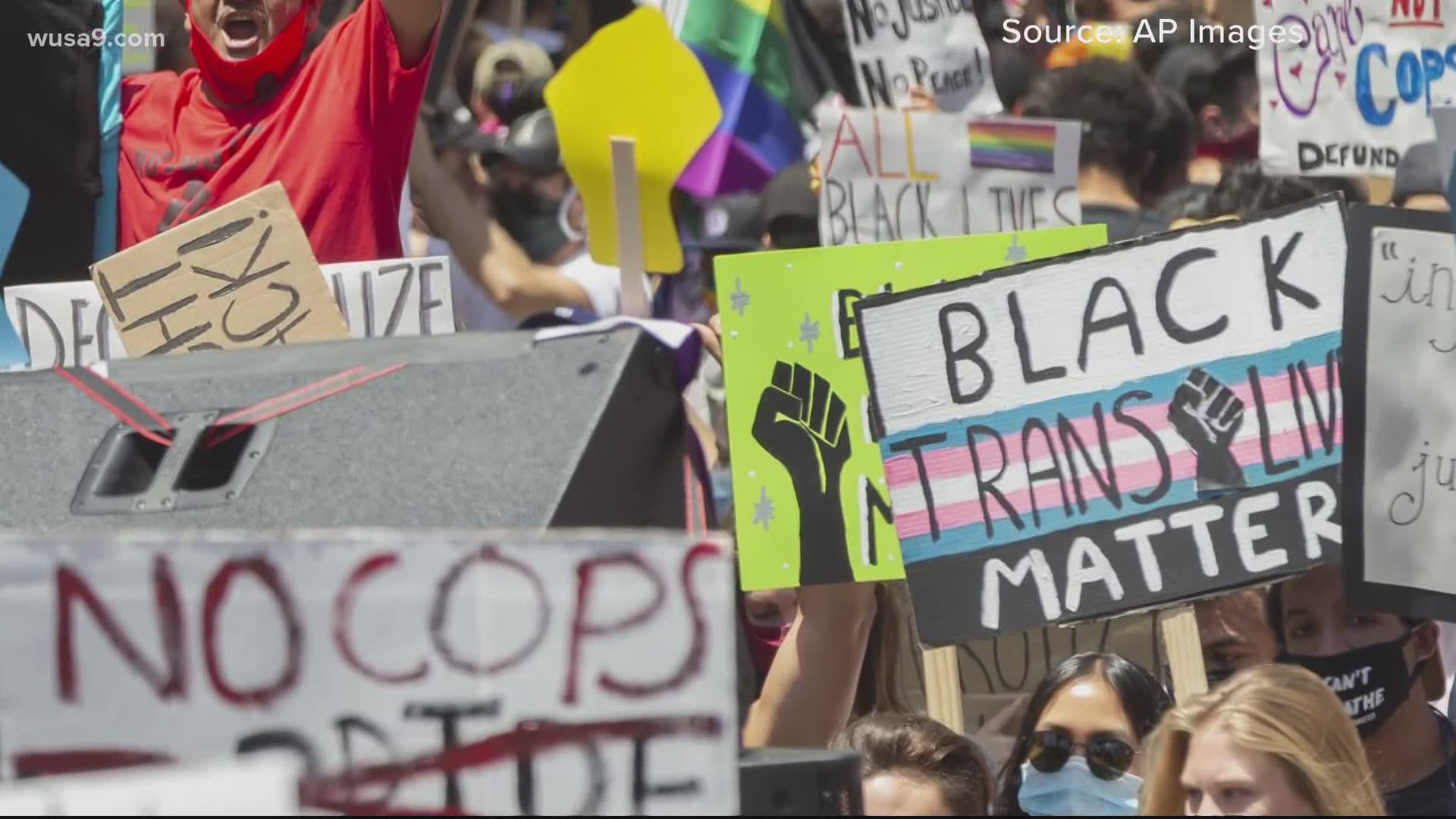 WASHINGTON — Lesbian, gay, bisexual, transgender and queer/questioning (LGBTQ+) people of color have often been involved in equality movements throughout American history. But organizers and LGBTQ+ issues were often left in the shadows.

LGBTQ+ people have faced discrimination, inequities under the law, and incidents of hate and violence.

In America, the evolution of LGBTQ+ people fighting for their rights is complex.

“I just want to make sure we understand there is no linear narrative about the queer rights or gay rights movement,” Dr. Kalima Young, professor at Towson University, said. “I also want to make sure we are clear that POC (people of color) and gender non-conforming folks have been in these streets from jump street.”

History of LGBTQ+ Rights in the U.S.

While Dr. Young typically avoids timelines when discussing the gay rights movement in America, she explained one of the first historic moments was the creation of the Society for Human Rights in 1924.

The organization was the first gay rights organization in the U.S., but the group was short-lived due to political pressures.

Then in 1948, Biologist and Sex Researcher Alfred Kinsey released work around sexual behavior in men and a sexuality scale that challenged conventional beliefs at the time.

“We all [now] know it is inaccurate and makes no sense,” Dr. Young explained. “But for the time – 1948, it was pretty on point for a lot of people's understanding and conceptions of identity and sexual morality.”

Kinsey came up with the loose understanding that 10% of the population has had same-sex practices, but Dr. Young said the research was not necessarily related to identity.

Specific work around the idea of homosexuality having an identity attached to it developed in the 1950s with the creation of the Mattachine Society, the second known gay rights organization in America. 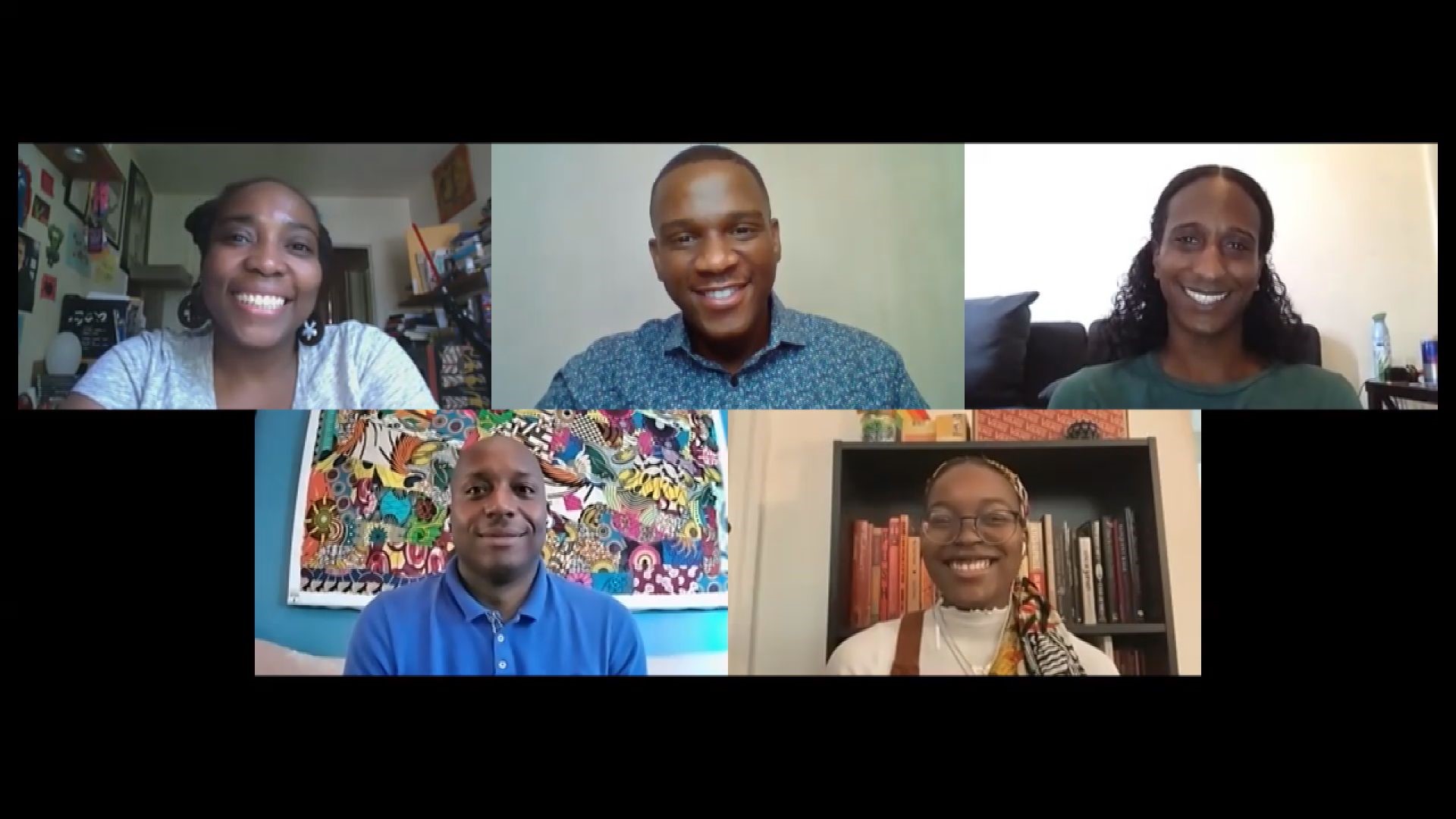 “This is happening at the same time that the federal government is creating all kinds of rules about the employment of sex perverts in the government and possibilities of people being corrupted under the Cold War,” Dr. Young told WUSA9. “You have a whole lot of the state intervention coming and saying that homosexuality was a sociopathic identity -- it was a mental illness. These people cannot have jobs.”

The American Psychological Association, at the time, had declared homosexuality as a mental illness – a decision it later rejected.

Dr. Young said far before the contributions of the Stonewall uprising, which some credit as the start of LGBTQ+ pride movements, there were activists who were creating small enclaves for a myriad of sexual identities and gender identities.

She said it is important to know what is considered to be the official written history and the accounts of the people of color who were amid groups making changes before well-known events.

“We often whitewash the history of the gay rights movement because it's so focused on this simplest understanding of ‘We are second class citizens. We're just like you. We just happen to be gay so give us some rights,’ versus having a movement, which really in the 70s, the gay rights movement was a sexual revolution,” Dr. Young explained.

“A lot of the idea of questioning who has rights and who doesn’t and a lot of getting that conversation started is on the backs of the civil rights movement,” Green told WUSA9. “People were not attempting to have these conversations until black people stood up first.”

“People started imitating or sort of riding on this beautiful wave of a set of a collection of movements and activist moments that needed the fuel of the Black civil rights movement to kind of like season the pot,” Dr. Young said.

Dr. Young said falling into the notion of a linear history of the Black and LGBTQ+ rights movement can be dangerous because it is acting as if there were not Black gay people present throughout history.

“Everybody can have many identities and be fighting in those movements in various ways,” Dr. Young said.

Norris is a youth fellow with SMYAL, an LGBTQ+ organization serving youth in D.C.

Rustin, who she described as a phenomenal leader, was one of the two main organizers of the March on Washington in 1963.

However, due to criticism over his sexuality and LGBTQ+ people at the time, he often stayed behind the scenes influencing and advising civil rights leaders.

“Bayard Rustin was struggling with being a queer person in that movement and whether or not his identity, his whole self, could show up and be visible in that movement,” Sultan Shakir, the Executive Director of SMYAL said.

Rustin later openly advocated for gay rights and was posthumously awarded the presidential medal of freedom by President Barack Obama.

Aside from political leaders, such as Rustin, cultural influencers who discussed queer issues or who identified as LGBTQ+ themselves were prominent during the civil rights movement.

“I think about the very special relationship between Nina Simone and Lorraine Hansberry,” Dr. Young explained. “There were these interesting -- and who knows -- but there are these interesting relationships that -- like James Baldwin to Toni Morrison. When you think about cultural workers and their relationships with one another and what they did to elevate the Black civil rights movement and other intersectional identities that were coming together, I think that's extremely important as well.”

Norris, who identifies as a black queer woman, looked to cultural creations and art to gain an understanding of the intersectionality of the people who came before her.

“The first place I went to understand was art, like, that is the art, like books, music visual art because that was really the only thing that I could understand. It was easily translated,” Norris recalled. That was just super super super important to me. This is -- I'm not alone. This is a thing. This is okay. You're going to have some challenges, but people have gotten through this.” 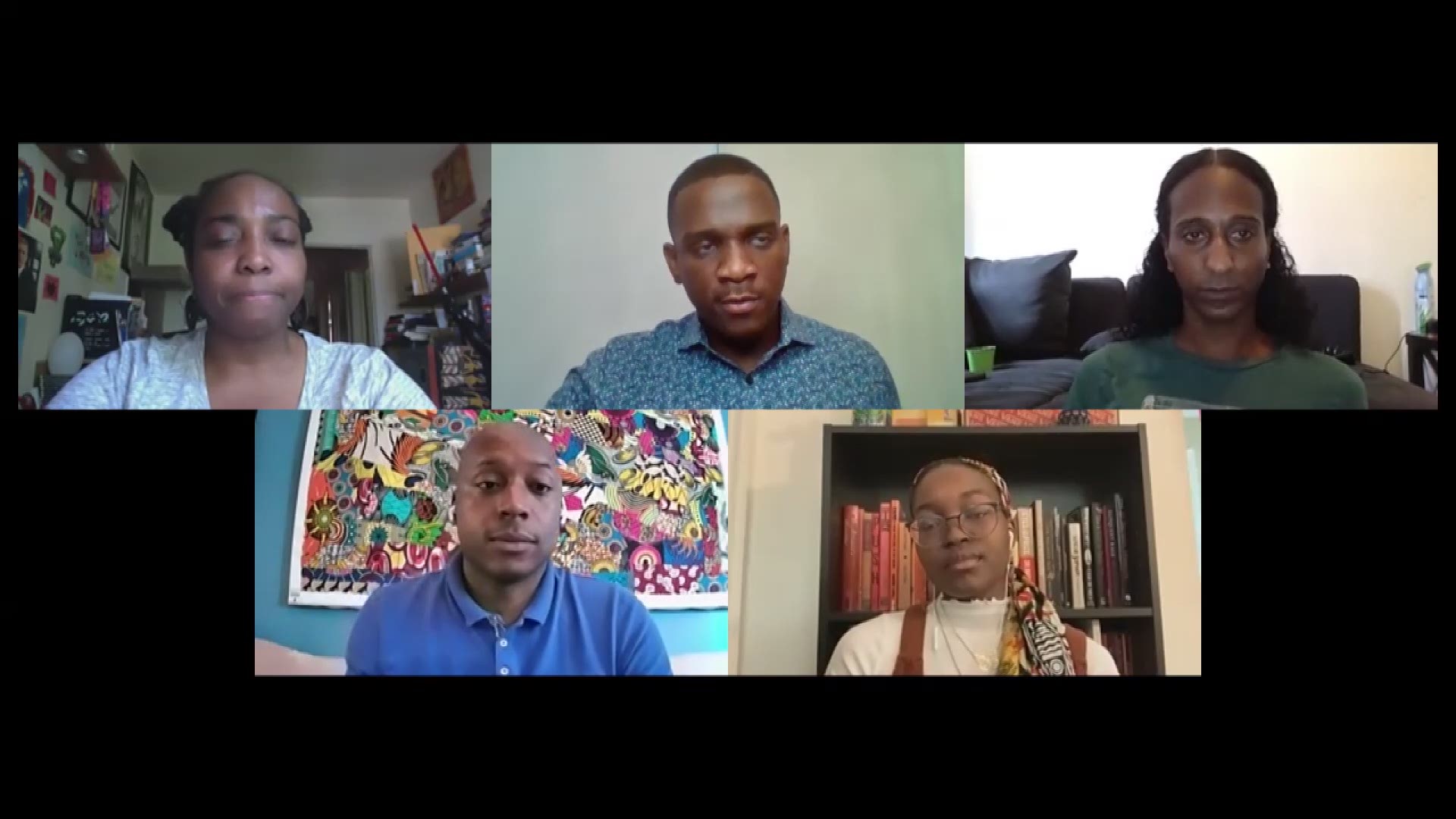 A new movement that ‘feels different’

The movement toward LGBTQ+ equality has been a rollercoaster of wins and losses for nearly a century.

Most recently, the movement for non-discrimination policies that support sexual orientation and gender identity in the workplace saw success in the Supreme Court of the United States (SCOTUS).

Justices ruled that LGBTQ+ people were protected under the civil rights act of 1964 which would make it illegal for a person to face workplace discrimination based on their sexual orientation or gender identity.

“Given that employment affects people in so many aspects of their lives -- like their ability to eat or ability to live -- and having the right to not only be employed but to be allowed in certain spaces, be able to participate in a certain institution is really critical,” Shakir stated. “That's also something that has moved forward and is moved back, particularly when different administrations come in.”

Other issues, such as a transgender person’s right to use the bathroom of their choice and same-sex marriage, have shifted over the years depending on those who are in power.

“I think there are a lot of the basic elements of like who we are as a human being and how we can show up as a human being in different spaces that have definitely had an impact and, I mean, to your point of going forward and backward have really been on this rollercoaster of when we get to the point where we as queer people, queer and trans people, can actually be in a space as who we are,” Shakir explained. 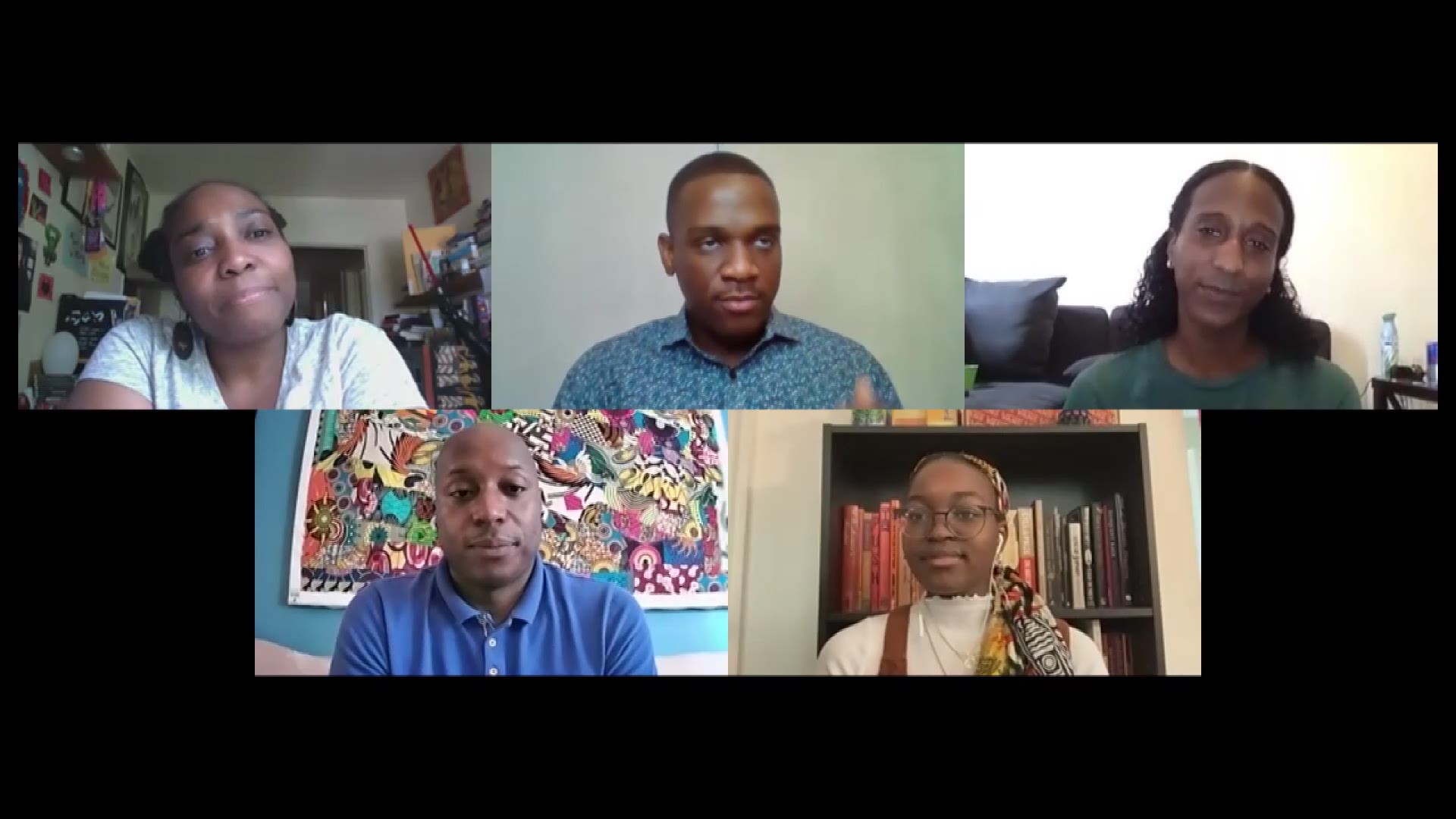 While strides are continuing to be made for Black and LGBTQ+ equality, it is important to note the visibility of queer activists and leaders on the front lines of the current Black Lives Matter (BLM) movement.

Unlike movements surrounding the 1963 March on Washington, more and more LGBTQ+ people are now openly and unapologetically leading in the 2020 movement by presenting the issues that matter to them and insisting that 'All Black Lives Matter.' 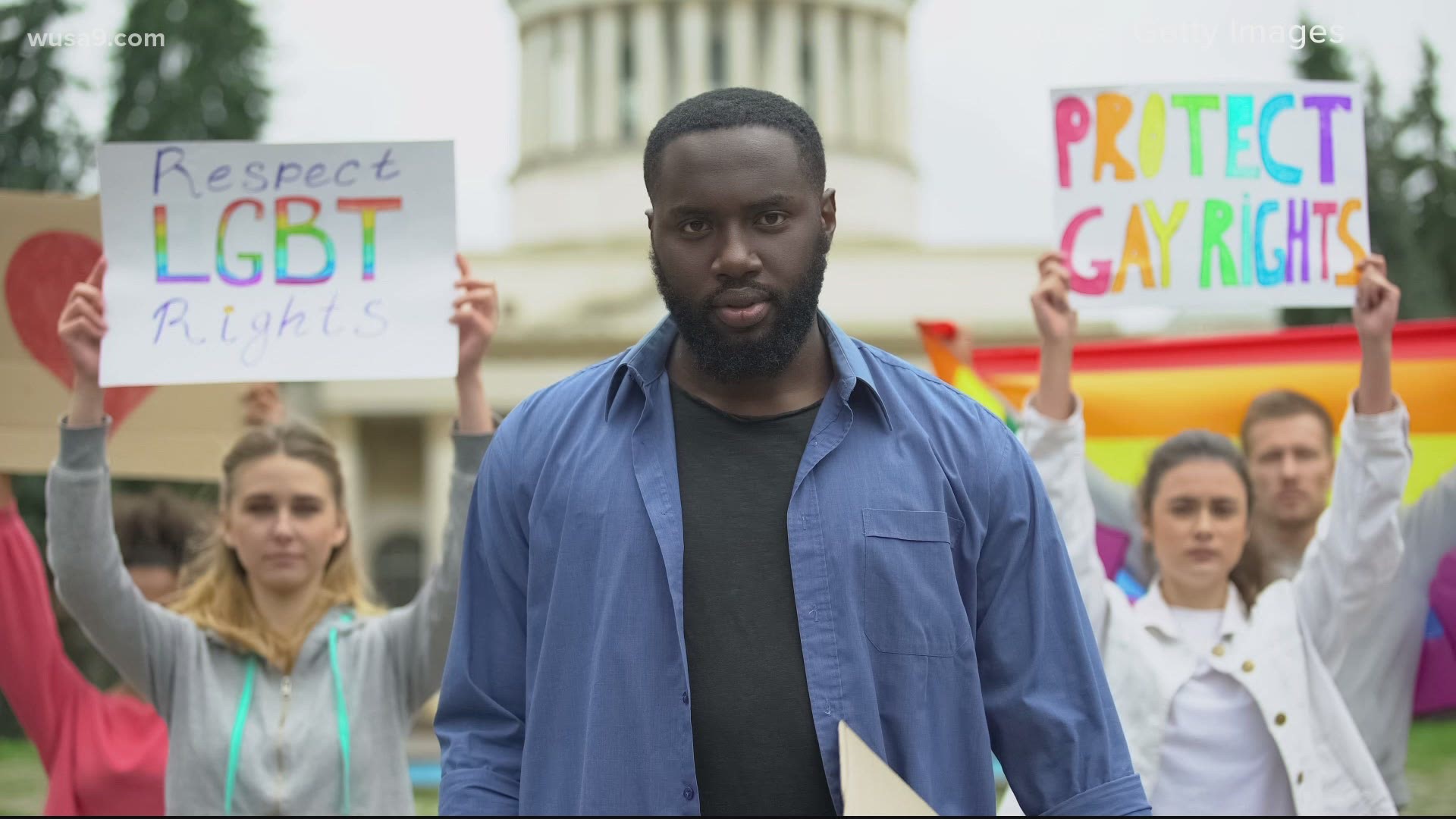 "There seems to be this notion that right now we can say Black Lives Matter and, then, once everybody thinks that Black Lives Matter, we can deal with the rest of it later," Green said "But we know that that's not going to work.

"I think also those arguments, totally delegitimize the folks who started the BLM movement, which is black and queer and gender non-conforming folk," Dr. Young added.

Norris told WUSA9 that when groups begin working to create legislation or policy changes it is important to be specific, especially because certain groups face more harm than others.

“The idea that queer folks are not sort of cowering in the corner and not having their contributions erased from this movement is what feels different this time to me,” Green said.

“For me, the current moment definitely does feel different. I am impressed, surprised by, encouraged by the amount of people who finally have the ability to see what people have been talking about for the longest time, largely due to footage and cameras and things like that. It's not just the story of, 'oh, that happened to me,' it’s people actually getting to see it,” Shakir told WUSA9.

Some leaders are pleased to see people and governments beginning to act via police and social justice reforms.

“I'm really hoping that we can really figure out a way to keep this moving forward as opposed to just being sort of a flash in the pan shockwave that everyone's concerned about right now and then a week from now, a month from now there's something else,” Shakir added.

While most of the panel WUSA9 spoke with for this story believed progress has been made for both movements over the years, all of the Black LGBTQ+ people agreed there is still work to be done.

“We need to build political power,” Shakir added. We need a change in who is leading us, what they know about us, whether or not they respect us. That involves building political power in order to be able to make that happens.”