In a pre-trial detention memo, Justice Department lawyers argue Eric Gavelek Munchel is a flight risk and that there is "strong" evidence of his dangerousness. 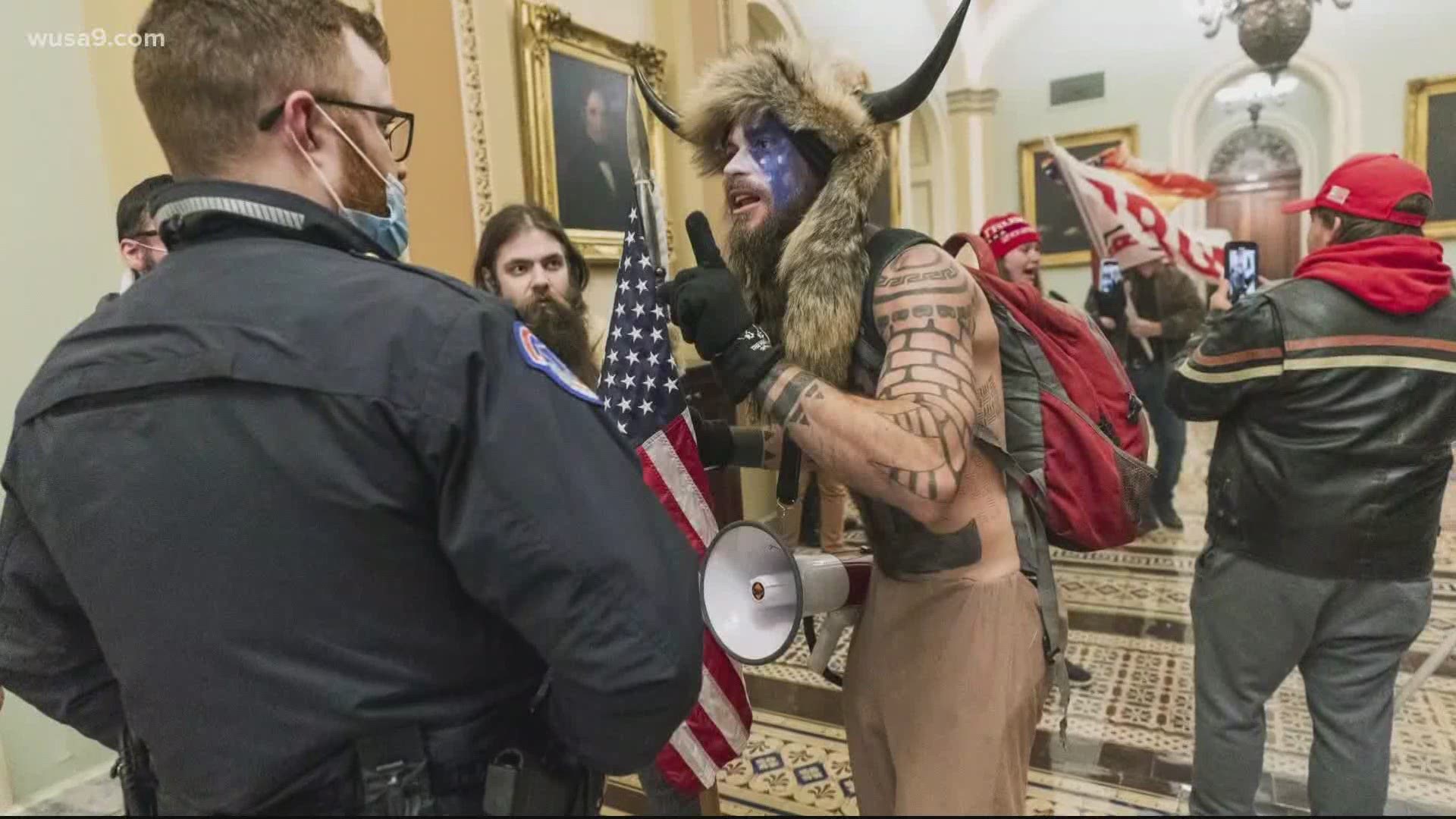 WASHINGTON — The man photographed climbing through the Senate chamber with law enforcement-style flex cuffs also stashed weapons in a backpack outside of the Capitol building, according to a request from DOJ lawyers asking he be kept behind bars until trial.

Eric Gavelek Munchel was arrested last week on charges of entering a restricted building and violent entry in connection with the Capitol riot on January 6. Federal prosecutors added charges of civil disorder and conspiracy and an affidavit charging his mother, Lisa Eisenhart, for her actions during the riot.

Investigators have identified Munchel as the man photographed carrying “zip ties” – law enforcement-style flex cuffs – through the Senate chamber. DOJ lawyers have described Munchel, who was wearing camo, a flak jacket and “Punisher” logo, as being “dressed for combat.”

On Thursday, Justice Department lawyers asked a federal judge in Munchel’s home state of Tennessee to keep him detained until he stands trial. In that memorandum, lawyers say Munchel is a substantial flight risk, and also that “the weight of the evidence of Munchel’s dangerousness is strong.” As evidence of that they present an allegation that hasn’t appeared in previous filings in the case – namely, that he and his mother had stashed unspecified “weapons” in a backpack outside of the Capitol Building before entering.

In a pre-trial detention memo filed in federal court in Tennessee yesterday, DOJ lawyers say "zip tie guy" Eric Gavelek Munchel had a safe full of guns at his home, including "assault rifles, a sniper rifle with a tripod, shotguns..." and a "drum-style magazine." pic.twitter.com/7qFwbV8IRt

According to the memo, investigators acquired a cell phone Munchel used to record his activities at the Capitol – and which he had allegedly given to a friend for "safekeeping" after returning. While Munchel and his mother were already well-documented throughout the day in photos on social media and in surveillance photos from the hotel they were staying in, the cell phone footage reportedly captured a number of other moments – including one in which Munchel and Eisenhart discuss whether they should bring weapons into the Capitol.

“We’re going straight to federal prison if we go in there with weapons,” Eisenhart allegedly says in the video. When Munchel agrees, she reportedly suggests they stash the weapons in a backpack.

Lawyers say the video shows the pair moving back to a “location where a tactical bag and other items appear to have been stashed” and then removing items from their person and placing them in and around the bag.

Per charging affidavit, this is Eric Gavelek Munchel – the man federal prosecutors accuse of being the individual photographed with #ZipTies in the Senate Chamber – posing with a shotgun and American flag in front of an image of President Trump. #insurrection #CapitolBreach pic.twitter.com/0gf1TFrmcq

Later, once inside the Capitol, Munchel reportedly is captured on audio saying, “[This is] probably the last time I’ll be able to enter the building with armor and… [expletive] weapons.”

According to the memo, the cell phone footage also captured the moment when Munchel acquired the plastic handcuffs he was later photographed holding.

"At one point, Munchel spots plastic handcuffs on a table inside a hallway in the Capitol," lawyers wrote in the memo. "Munchel exclaims, 'Zipties. I need to get me some of them [expletive],' and grabs several white plastic handcuffs from on top of a cabinet..."

Munchel and Eisenhart allegedly then joined in with a larger crowd in the Capitol shouting, "Traitors!" and "Treason!"

The memo does not specify what weapons Munchel and Eisenhart are alleged to have stashed prior to entering the Capitol building, and notes that Munchel had told a journalist that he'd left his guns at home due to D.C.'s firearm restrictions.

Federal agents who executed a search warrant on Munchel’s home in Tennessee reportedly found a safe with 15 firearms, including “assault rifles, a sniper rifle with tripod, other rifles, shotguns, and pistols, and hundreds of rounds of ammunition.” Agents also reported finding a “drum-style magazine” elsewhere in the house. The memo does not contend that any of the firearms were owned illegally.