Girls wrestling grows nationally, but Virginia still has yet to form a female-only high school league

A pilot program for girls-only tournaments could change that with large turnouts. Meanwhile, determined wrestlers, who happen to be female, are still waiting. 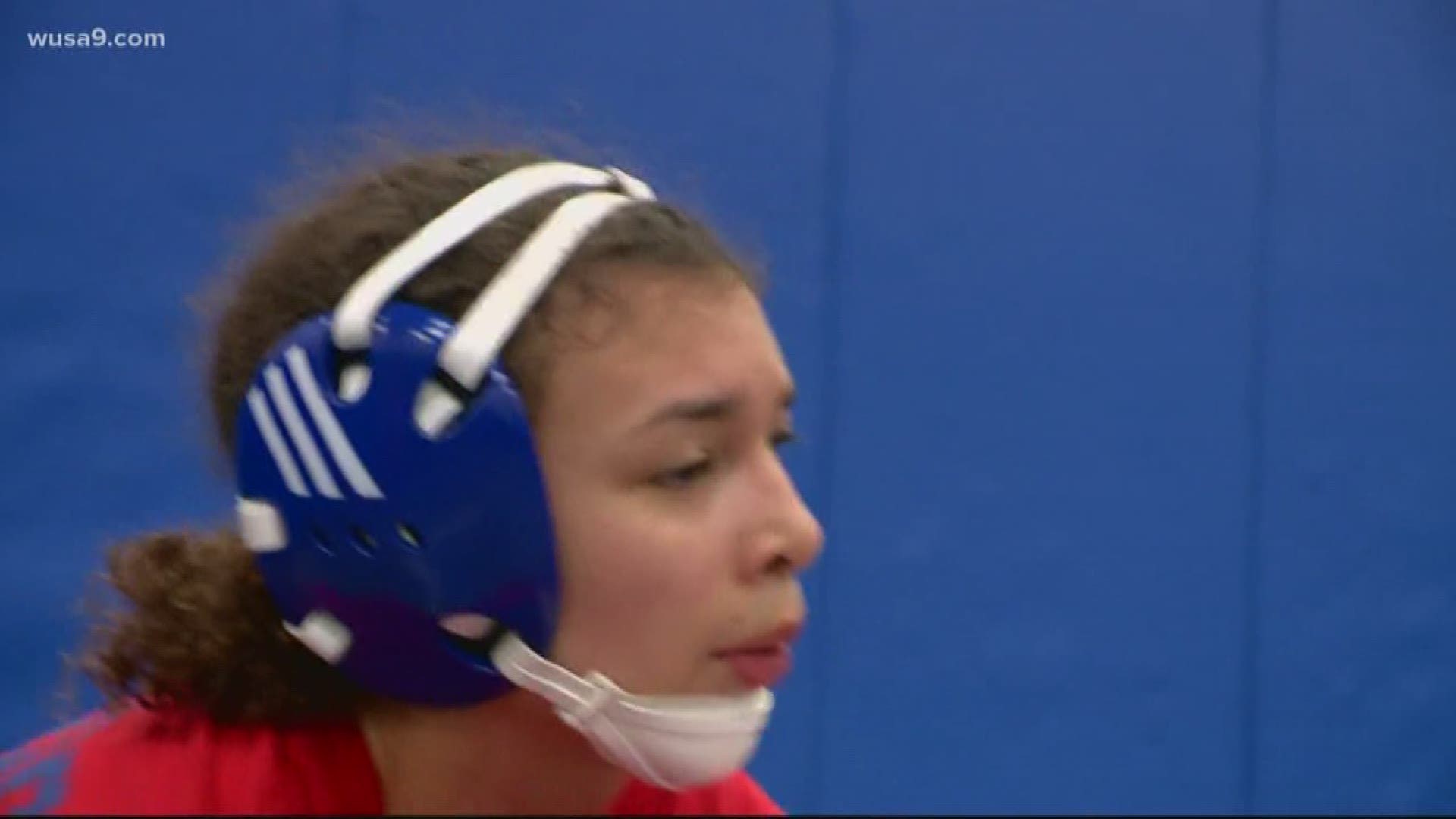 LEESBURG, Va. — Another day of practice for Julianna Erice and Danielle Webb at Riverside High School, another day of learning all the right techniques to make them better wrestlers, so they can prepare for their next match, so they can grapple against more...boys.

"Virginia's pretty behind the times," Erice laments. "Hawaii was the first state that sanctioned women's wrestling in high school. And I guess Virginia just hasn't gotten around to it for some odd reason."

The Rams' girls wrestlers, made up of two sophomores and a junior, not only train with Riverside's boy's team during practice sessions but because there is no sanctioned girls-only division in the Virginia High School League (VHSL) they are forced to wrestle other male athletes during high school meets.

And that brings on a sobering reality for Erice and the more than 200 female wrestlers currently competing in the VHSL.

"It makes me feel kind of disappointed because if I want to wrestle like a lot of matches, I would have to wrestle against boys and boys are biologically stronger than me," Erice said. "So, it's an unfair advantage."

"Even if you're in the same weight class they're still a little bit heavier and they can muscle through a lot more. I mean, not saying that girls are weak or anything ... it's just like again like the whole difference with the boys and girls, it just it's a lot better to be able to wrestle like the same gender," Webb said.

The VHSL currently has a three-year pilot program featuring less than six girls-only meets per year in different geographic locations around the state, said Chris Robinson, the VHSL's assistant director of athletics, by phone from his office in Charlottesville, Virginia.

"If we can get enough numbers to field a championship tournament, or the numbers warrant that we have our own league, we hope to go that direction," Robinson said.

But he wouldn't guarantee anything. There were 232 girl wrestlers last year in the VHSL, but in the second year of the pilot program, just 110 participants showed for the girls-only meets.

"If we can field a real championship tournament, then there is reason to do it. It's not about money. But if we can't do that..." Then Erice, Webb and many other female wrestlers' dreams in the state are may be dashed.

Aubrey Erice, Julianna’s mother and coach, has been with Riverside for five years and has pushed the VHSL to create a girls-only division because she wants her wrestlers to be on an even playing field.

"We want a girls-only division, so that the girls can compete against other females," Aubrey said. "And we want female-only tournaments."

"Every single state that has recognized it as a division at the high school level has seen tremendous growth," Aubrey added. "There's opportunities for scholarships for the next level, there's opportunities to represent our country in the Olympic Games. But it's got to start by providing them support and the opportunity to do that."

RELATED: Meet one of the first female head wrestling coaches in Virginia. She's breaking barriers for her team

The Washington Post reported on the growing interest in girls’ wrestling last year.  There were 159 girl wrestlers in 2016 and that number grew to 246 girls in 2017-18, according to the National Federation of State High School Associations. Robinson's most recent number of 232 last year is on par with that growth.

Why more haven't shown up at the girls-only pilot tournaments is a mystery to Robinson. But as anyone in youth or prep sports knows, traveling three and four hours from say, Norfolk, to Charlottesville, is a major time commitment. Events not happening close to your geographical area are simply too difficult to attend for many families on a budget or with two working parents.

The bottom line is, if around 224 wrestlers could show up for one of the girls-only meets, it would immediately force Robinson and other VHSL officials to strongly consider a girls-only league and championship. The boys' state tournament has six weight divisions and depending on the class, will pit 12 to 16 wrestlers per bracket.

If the pilot program is deemed successful after it finishes in 2021, a girls-only division could be green-lighted as early as the the 2021-2022 school year. "Or sooner if we find out the numbers and interest lean toward doing something earlier," Robinson said. "I just can't say right now."

However long it takes, it won't be soon enough for Erice, Webb and dozens of other female wrestlers still forced to compete against boys because they still don't have their own competitions.

"So many other states have just sanctioned women's wrestling," Erice said. "An to be near the capital, I feel like we should have been one of the first to do it, but we weren't."