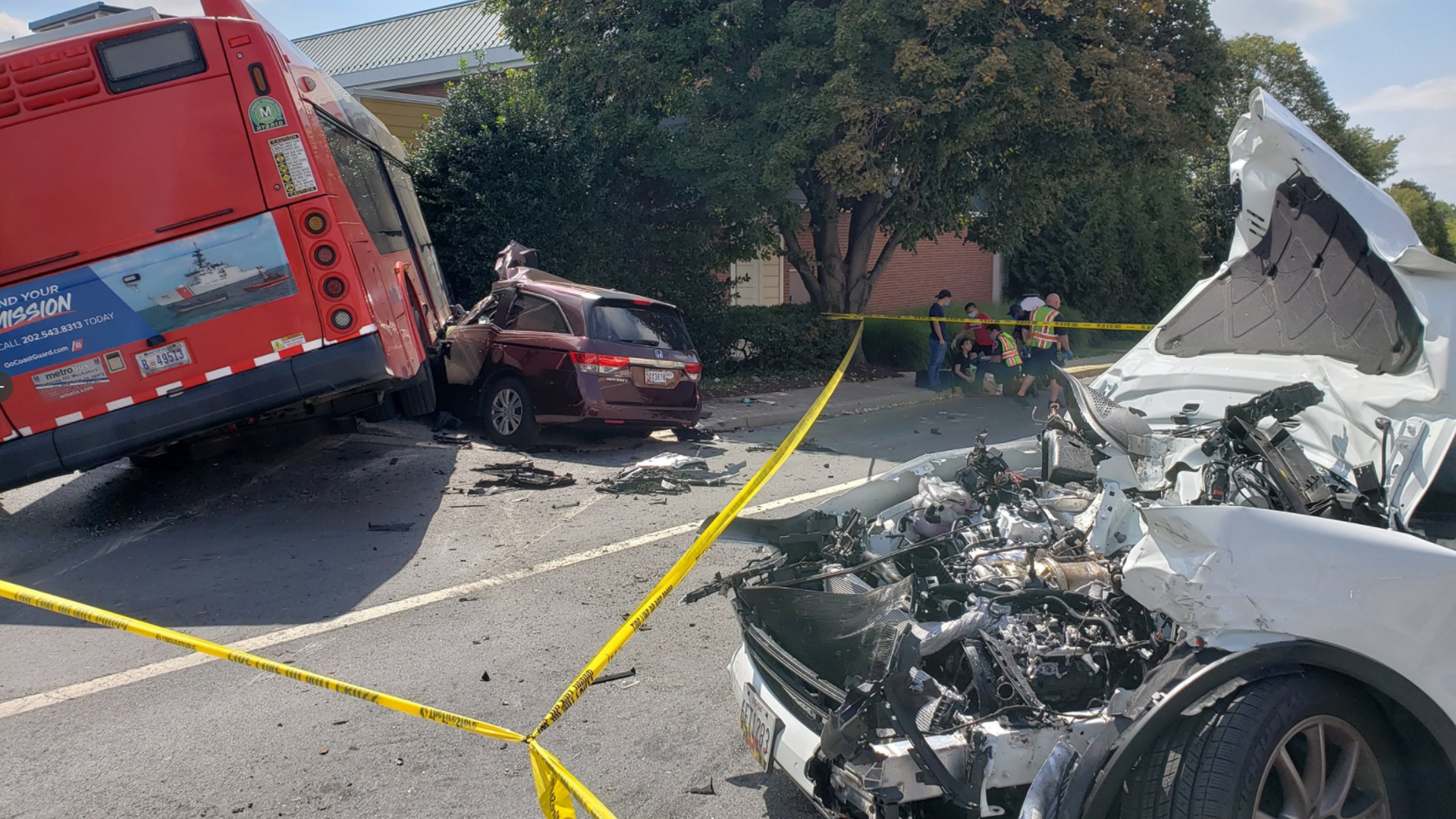 MONTGOMERY COUNTY, Md. — A WMATA Metro bus was involved in a multiple-vehicle collision Sunday afternoon in Rockville along Rockville Pike, resulting in serious injuries to at least two people.

Four of the people involved were taken to area hospitals, according to a spokesperson for the Montgomery County Police Dept. The spokesperson said the Metro bus was driving southbound on Rockville Pike around 12:20 p.m. when it lost control and swerved onto Congressional Lane and crashed into one car and causing a chain reaction with others.

The front end of the bus landed on a Honda Pilot Passport where police said it came to a stop. The crash caused a chain reaction with three other cars, according to police.

MCFRS are on the scene of a collision with multiple injuries involving a @WMATA Metro Bus and several vehicles at Rockville Pike at Congressional La. 6 pt. being evaluated at leat 2 have serious NLT injuries. @mcfrsPIO pic.twitter.com/4rsNL5tJVI

Pictures of the scene posted by Montgomery County Fire & EMS show the crumpled front of a maroon SUV trapped under a WMATA bus, which was tilted on its side. At least one other vehicle can also be seen in the pictures with serious front-end damage.

A woman who was retrieving personal items from the SUV said her husband and child were inside the vehicle at the time and are okay.

Just spoke with a woman, who retrieved personal belongings from this van, who said her husband and daughter were inside. She said they both are going to be okay. She said her husband is still in the hospital pic.twitter.com/OYNCUF769s

First responders initially arrived on the scene and identified six patients in need of evaluation, including two who were determined to have serious, but not life-threatening, injuries. At least one of the patients was a child.

A WMATA spokeswoman said no passengers were on board the bus at the time of the crash. The bus driver was transported to a nearby hospital with non-life-threatening injuries.

It was not immediately clear Sunday evening what caused the collision.

The intersection where the crash occurred is a busy shopping area just southeast of the Woodmont Country Club near Rockville. Traffic in the area was impacted for eight hours Sunday while crews cleaned up the collision and worked to determine what led to the crash.

Dozens of people are watching as crews work to remove the crashed Metro bus. pic.twitter.com/b28ArZPPla