There are several events happening on the National Mall this Independence Day and the road closures are extensive. 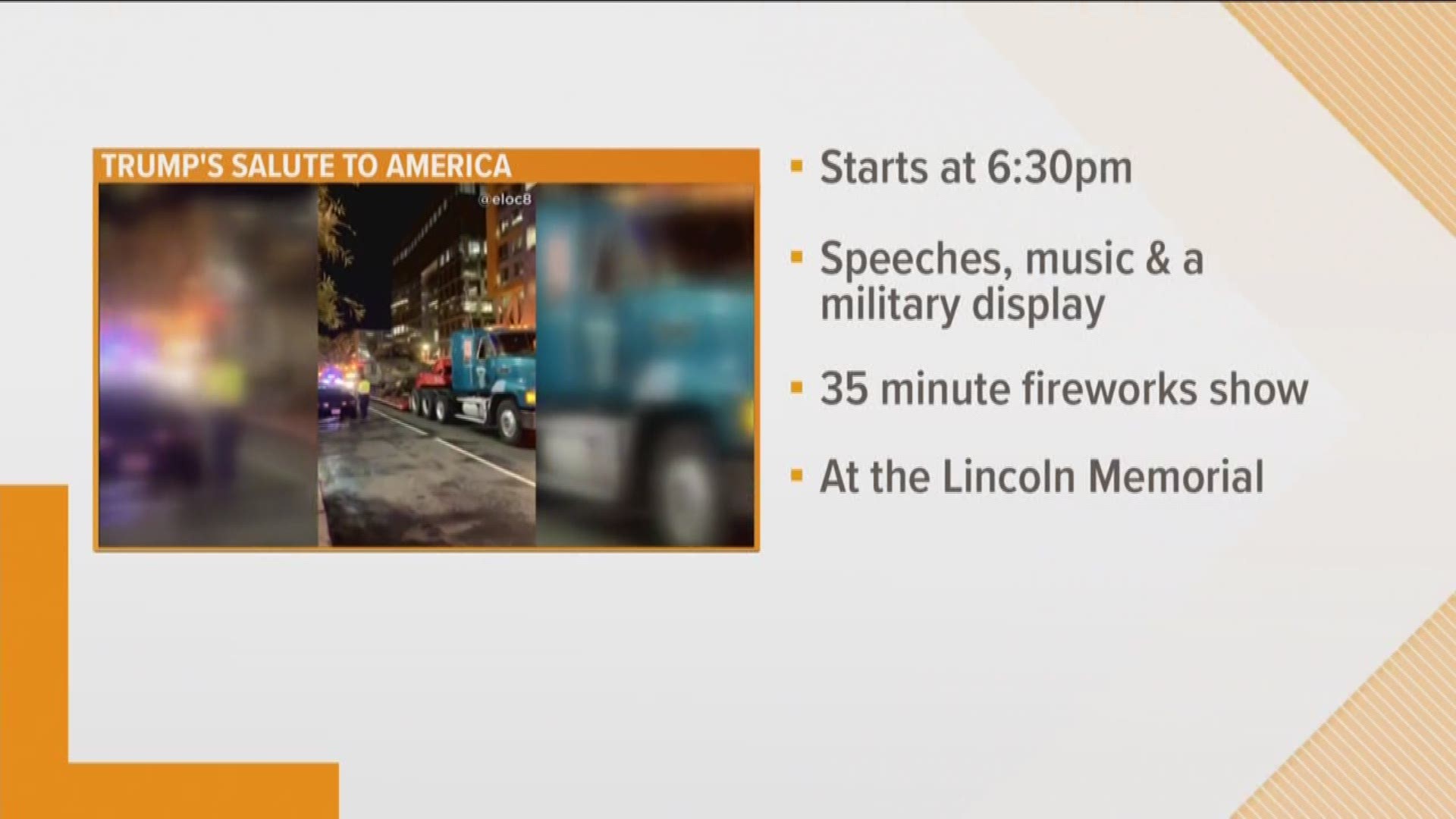 WASHINGTON — It's that time of the year again and this time around there are even more restrictions in place for the Fourth of July on the National Mall and surrounding areas.

That's because President Donald Trump is planning an event at the Lincoln Memorial in addition to the traditional events that have happened in years prior.

For starters, the National Independence Day Parade will step off at 11:45 a.m. on Constitution Avenue NW from 7th Street NW to 17th Street NW. There will be marching bands, military units, floats, drill teams and the whole nine yards, government officials said in a release.

Trump's "Salute to America" at the Lincoln Memorial is scheduled to begin at 6:30 p.m. He is expected to "lead a celebration of America's military with music, military demonstrations and flyovers," according to a release. Gates will open at 3:30 p.m. (More on that in a minute)

The annual "A Capital Fourth" happens on the West Lawn of the U.S. Capitol Building at 8 p.m.

Then, the fireworks display is slated to begin at 9:07 p.m. This year, the fireworks are being launched from West Potomac Park and behind the Lincoln Memorial.

Below is a map of the designated closures, per officials, plus some of the restrictions for the waterways. To see a full written list, keep scrolling down.

RELATED: Looking for a fun fireworks show this July 4?

Theodore Roosevelt Bridge (TR Bridge) Inbound to Constitution Avenue; all traffic will be diverted to the E Street Expressway

Arlington Memorial Bridge (to both vehicle and pedestrian traffic)

Maine Avenue, SW will be closed at I-395 to all westbound traffic

Credit: Metro PD
There are extensive street closures this Fourth of July.

East Basin Drive, just south of the Jefferson Memorial (visitors will not be able to access the National Mall from this checkpoint)

Trains will operate on a Saturday schedule, every 12 minutes on each line until about 2 p.m. gradually ramping up to near rush-hour service levels thereafter.

Due to large crowds, bicycles and large coolers are not permitted after 2:00 p.m.

Due to the Foggy Bottom station's proximity to the Lincoln Memorial, it may become "entry only" prior to festivities and "exit only" afterward, WMATA said in a release.

Parking: Free at all Metro-operated facilities.

Fares: Off-Peak fares will be in effect all day.

WMATA recommended avoiding the Smithsonian stop if you can, since it often gets overcrowded during large events on the National Mall. They offered the following list of alternative stops and suggested walking from there, and avoiding a transfer from your origin line:

Due to this station's proximity to the Lincoln Memorial, it may become "entry only" prior to festivities and "exit only" afterward.

Metrobus will be running on the Saturday schedule. Expect detours around the National Mall.

Use the WMATA Trip Planner for specific date and time travel information, as some nearby Metrobus routes operate Monday through Friday only.

Watercraft restrictions on the Potomac River

South of the Theodore Roosevelt Bridge to the Arlington Memorial Bridge will be a No Anchorage Zone.

There will be a designated anchorage zone north of the 14th Street Bridge on the west side of the Potomac River (Virginia shore side); this zone will be just north of the entrance to the Pentagon Lagoon to south of the Arlington Memorial Bridge.

There will be a watercraft safety zone north of the 14th Street Bridge on the east side of the Potomac River (Washington, DC side); this zone will be just north of the entrance to the Pentagon Lagoon to south of the Arlington Memorial Bridge. This means no boating, no anchoring.

Watercrafts will be allowed to anchor outside of the channel north of the Theodore Roosevelt Bridge and south of the 14th Street Bridge.

There may be intermittent travel restrictions between the 14th Street Bridge and the Theodore Roosevelt Bridge between the hours of 8:30 p.m. – 10:00 p.m.

Anyone who wants more information on boating restrictions should call 202-727-4582.