The 45-second clip shows four officers surrounding a man pinned up against a fence by three of the officers. 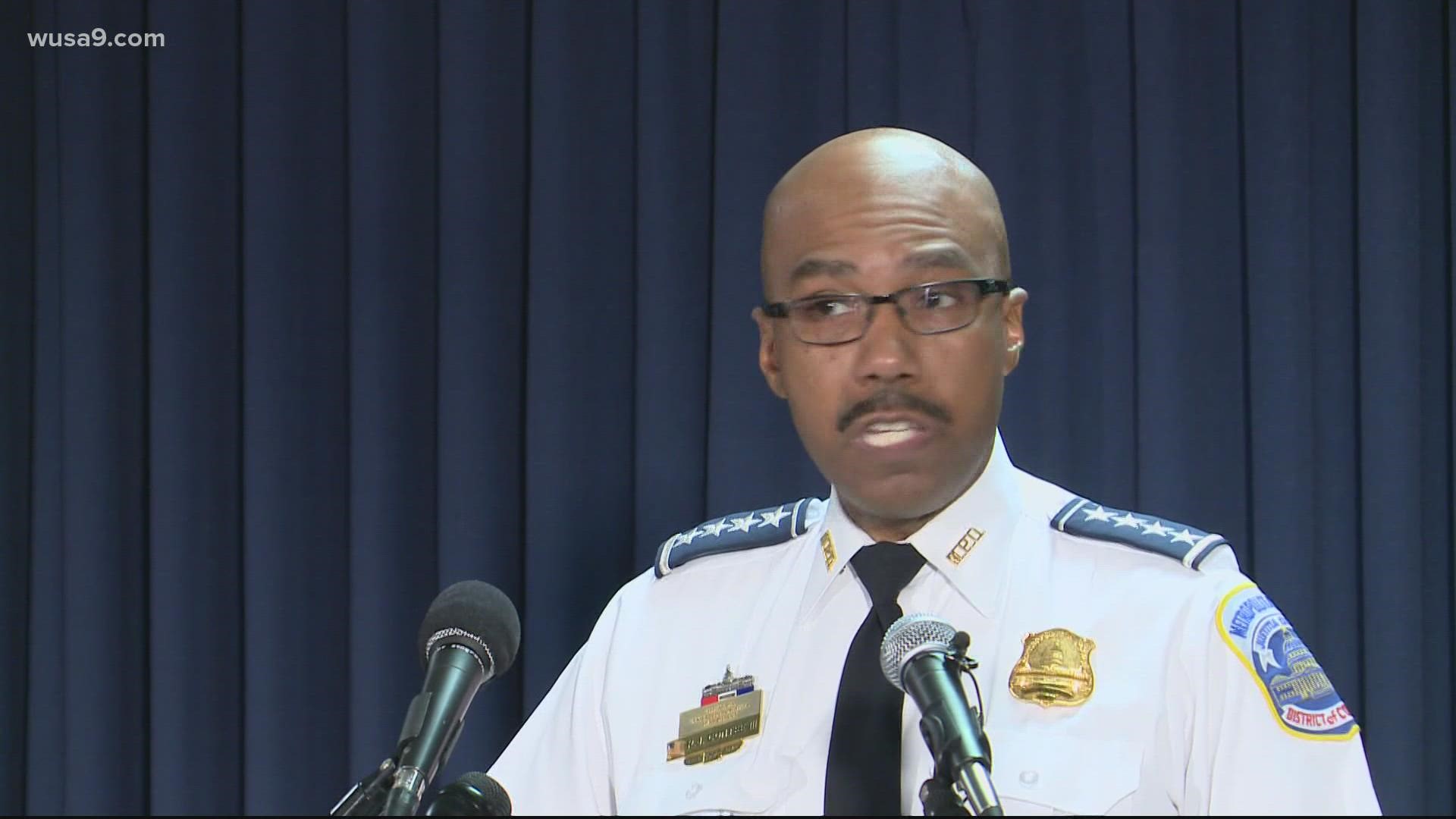 WASHINGTON — Three D.C. Police officers are under criminal investigation after a video circulating social media showed an officer punch a man repeatedly during an arrest while the other two officers tried to restrain him, D.C. Police Chief Robert Contee said in a Monday news conference.

The 45-second clip, from an incident on Sunday, shows 23-year-old Kiman Johnson pinned up against a fence by three officers in the 1500 block of U Street in Southeast. An officer facing Johnson proceeds to punch him approximately 13 times in the face and body while the other officers put him in handcuffs.

“I have watched this video. I am embarrassed, disheartened and ashamed, of what I’ve seen,” Contee said. “We are an agency of more than 3,500 officers, and I assure the community this is not consistent with our training, our tactics, our policies, procedures, nor is it consistent with our agency’s values.”

Contee said Johnson's arrest was initiated after officers witnessed a drug transaction and that during a pat-down officers felt a gun. The chief said an illegal gun was confiscated during the interaction.

"We have a responsibility on the way we treat the community and we didn't do that," Contee said. "This is not how we train our members to get illegal firearms off the streets."

The incident will be reported next to the U.S. Attorney's Office for review, and all three officers have been put on non-contact status, Contee said. He added D.C. Police will also start their own investigation, too.

The DC Police Union released a statement Monday evening, which in part reads:

"MPD officers know that in the current political environment every action they take will be scrutinized. Police officers make split-second decisions about their safety and the safety of those around them. Scrutiny, however, is performed with a microscope as though the circumstances took place in a laboratory. That is not the case ... The suspect had access to a loaded .45 caliber weapon, was resisting arrest and as such a danger to every person in range of a bullet. We urge everyone to reserve judgment pending the outcome of the respective independent investigations."

@DCPoliceDept OFFICER SEEN PUNCHING A GUY IN THE FACE TODAY IN SOUTHEAST DC!!!!! WHERE IS THE WORLD WIDE MEDIA COVERAGE NOW???!!!!!! pic.twitter.com/B8lFJyDkXf

Following Contee's press conference, community activists gathered outside MPD headquarters, saying the actions of the officers speak louder than the chief's impassioned rebuke of their behavior.

"Hear me clear: I support our police department," activist Regina Pixley said. "We have some great officers out there every day, but we have a few who are not used to working with this community who have been getting away with this mess."

Ward 8 Councilmember Trayon White applauded Contee's response to the use of force incident, but after a violent weekend with 12 shootings and three murders, White said we need more than police to cure our streets.

"We've always been in a pandemic if you look at lack of services, mental health resources and school," White said. "At one point, 40% of black boys failed 9th grade in D.C. So we have to address real issues in the city to turn this around."

D.C. Council recently voted to cut in half Mayor Muriel Bowser's request for $11 million to hire 170 new officers to the force. Instead, council members approved $5 million for new officers and $6.1 million for other safety programs and initiatives.

A spokesperson for Councilmember Janeese Lewis George believed the revised funding would help hire around 60 officers over the next two years and some additional cadets.

The $6.1 million in alternative funding includes: