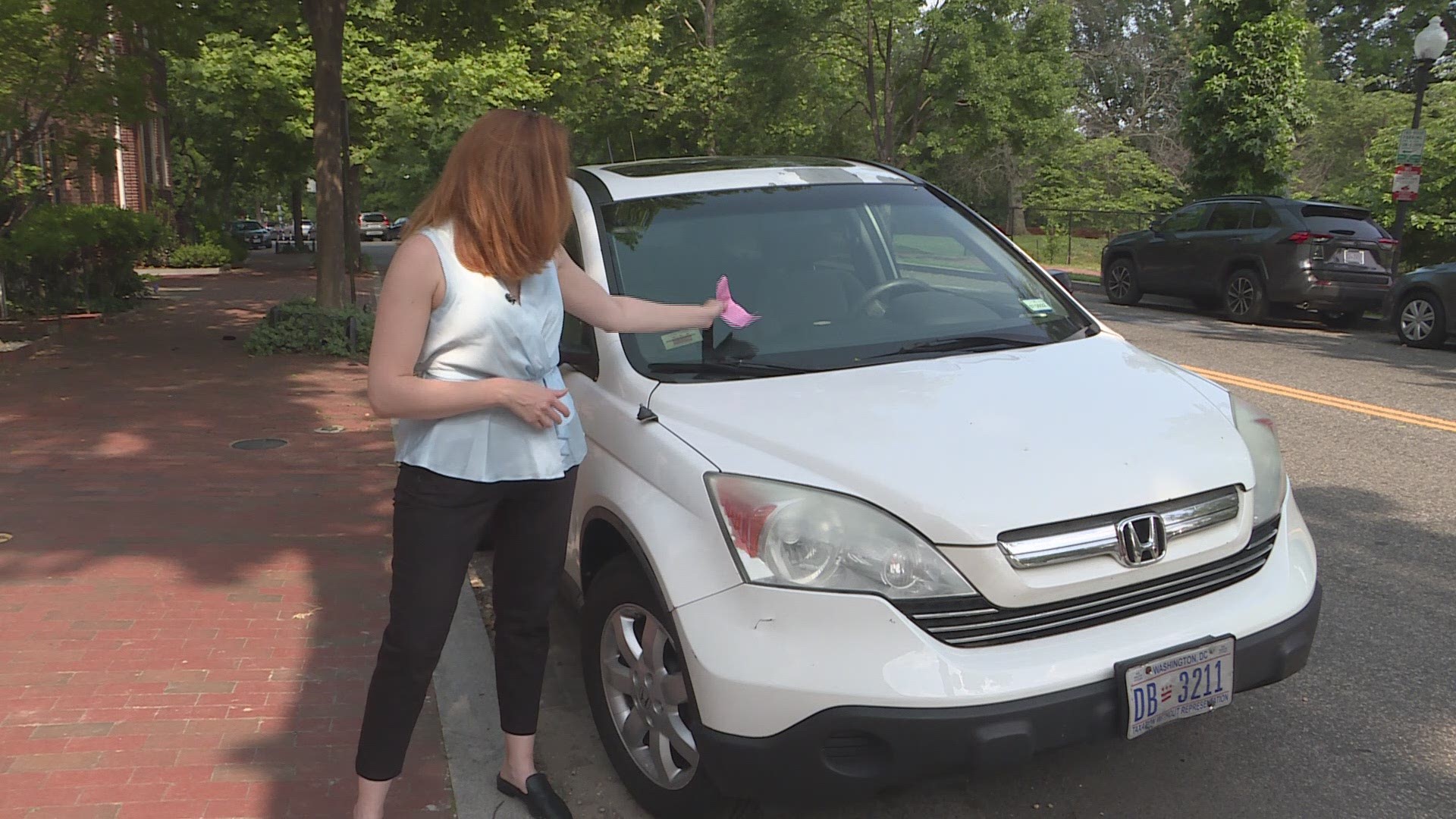 WASHINGTON — Parking enforcement has returned with a vengeance in the District, but some neighbors are still struggling to get appointments at the D.C. Department of Motor Vehicles (DMV).

Data released by Mayor Bowser's office recently showed that more than 50,000 parking tickets were issued in the first two weeks of June. That's compared to less than 18,000 the last two weeks of May.

“I think the bottom line is that if we're going to have a full-time parking enforcement street sweeping that we also need to have a full-service (DC) DMV," Ward 4 Councilmember Janeese Lewis George said.

Right now, there are no walk-up appointments available. Residents have to schedule one in advance online.

Many say they have been struggling to snag an elusive appointment online, like Valentina Lara, who hasn't been able to get her driver's license.

“I've been unsuccessfully trying since August of 2020," Lara said.

The Department of Motor Vehicles extended the deadline to renew expired licenses until September 9, so residents have a little extra wiggle room to try to schedule an appointment.

Every day I hear from people still struggling to get DMV appointments.

The Hunger Games appointment system didn't work for vaccines and it's not working for the DMV either. People shouldn't have to stalk a website to get basic services.

As DC reopens let's reopen the DMV too. pic.twitter.com/BsD2Wq6LE1

From inadvertently scheduling an appointment at an office that only handles commercial licenses to being told she doesn't have proper documentation, Lara has faced a slew of issues.

“You have to search office by office to see where you can get an appointment. And so that's what makes it challenging. It's also having the right documentation that always isn't straightforward," Lara said. "It's really unfortunate that as D.C. taxpayers, we're not getting the services that we need.”

She worries for people who really need their licenses or registrations to get around.

“The hunger games appointment system did not work for vaccines, we know that," Councilmember Lewis George said. "And it's not working for the (DC) DMV, either.”

D.C.'s DMV recently increased the number of weekly appointments from 6,000 to 10,000 but said they're still not opening walk-ups. Councilmember Lewis George is pushing the D.C. DMV to resume them immediately.

“The reality is that some residents will need to go in person to resolve issues, or because they can't access on the website. But without walk-up appointments, that's not possible," she said. "We're also asking for those critical services that need to be handled in person for service centers to be opened up for those for those services.”

Lara has given up getting a license for now but is hoping to help others by drawing attention to the issue.

“It upsets me knowing that people might, you know, need a license to work, and they're unable to get one because of the inefficiency of the system," she said.

WUSA9 reached out to the D.C. DMV for their response and future plans and didn't hear back. On Monday after the D.C. Statehood hearing, Bowser addressed the reopening of DMVs for walk-in appointments.

We will be able to open DMVs to limited walk-in hours as early as this weekend,”
Bowser said. "But that's not to say, people should take care of all their DMV business online which most of it can be taken care of online and for limited circumstances, we will need you to come in."