WMATA is providing free shuttles as it works on the West Hyattsville, College Park-UMD, Greenbelt, and Prince George's Plaza stations. 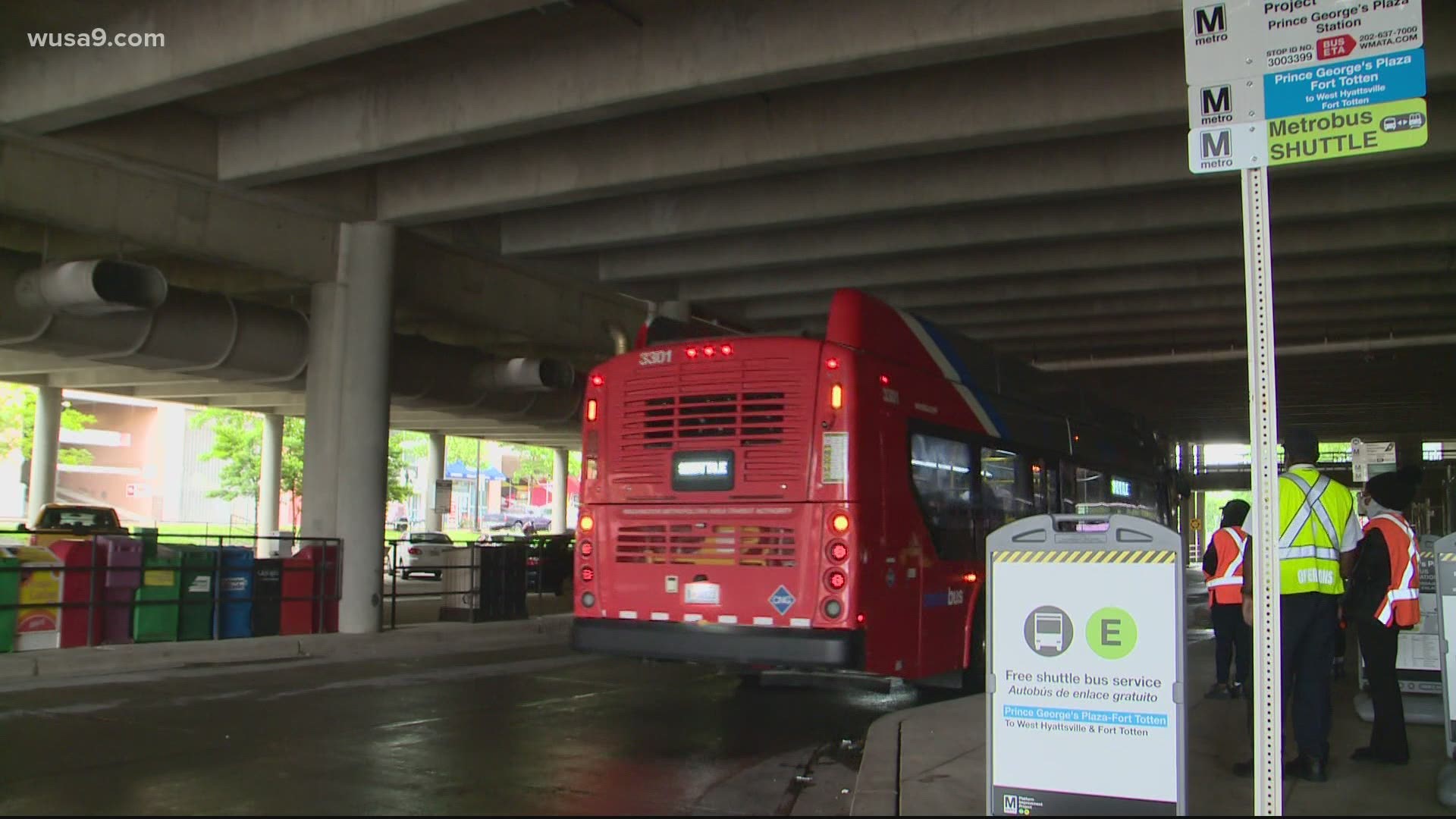 HYATTSVILLE, Md. — With more people getting vaccinated and looking to make plans outside of their homes, some who take the Metro will face construction and delays in Prince George's County.

As part of its Platform Improvement Project, WMATA has closed the West Hyattsville, Prince George's Plaza, College Park-UMD, and Greenbelt stations from May 29 to Sept 6.

“It's annoying, but it's important," one rider Malcolm Clark said. He lives near the Prince George's Plaza stop, and typically uses the train to get to and from D.C.

Some of the major renovations include installing slip-resistant tiles to the platforms, new platform shelters, and display screens.

WMATA says it will provide free shuttles for passengers throughout the construction — which workers said Saturday arrives about every 10 minutes.

The closures — all on the Green and Yellow lines — come when pretty much the entire DMV region has fully reopened, and more people are looking to use mass transit again — like Clark.

“Well, they’ve got to do it, you know, but I prefer they’d have done it in the winter, when there wouldn't have been so many people and so many tourists around," Ann Charlotte said. She also lives near Prince George's Plaza.

RELATED: After a pandemic dip, holiday weekend travel is on the rise

They’re providing free shuttles from these stations for the summer.

What riders think on @wusa9 at 6. pic.twitter.com/k0UlCcmysw

Charlotte said it could add up to 40 minutes to her travel time, especially because the possibility of contracting COVID still makes her wary of getting on a bus that's too crowded.

“One came and they all piled on it. And I said to the gentleman, I wasn't going to get on it," she said.

Others, like Stephanie Stephens, were more concerned about making sure they found the right shuttle.

"It's confusing until you start talking to people and see signs, like here," she said. "When I got over here I see it says shuttle. Okay, where's it going? She said, Go all the way down here for Fort Totten. So if you don't know, you don't know it.”

Still, the riders WUSA 9 spoke with on Saturday said the upgrades are worth the annoyance.

“It's important. It's the backbone of the region," Clark said. "So it needs to get improved and they need to like focus on it, and I’m glad they’re taking the time.”

Last Sunday, WMATA reopened the Addison Road and Arlington Cemetery stations on the Blue line after three months of construction.

WMATA said their reopening marks the completion of all 12 stations slated for platform reconstruction in Virginia, and the first station to be reconstructed in Maryland as part of Metro's Platform Improvement Project.

WMATA lists the following travel alternatives on its website during this next round of closures: