The partner of Mexicue at 14th Street & Riggs Street said one of the patrons happened to be a doctor. 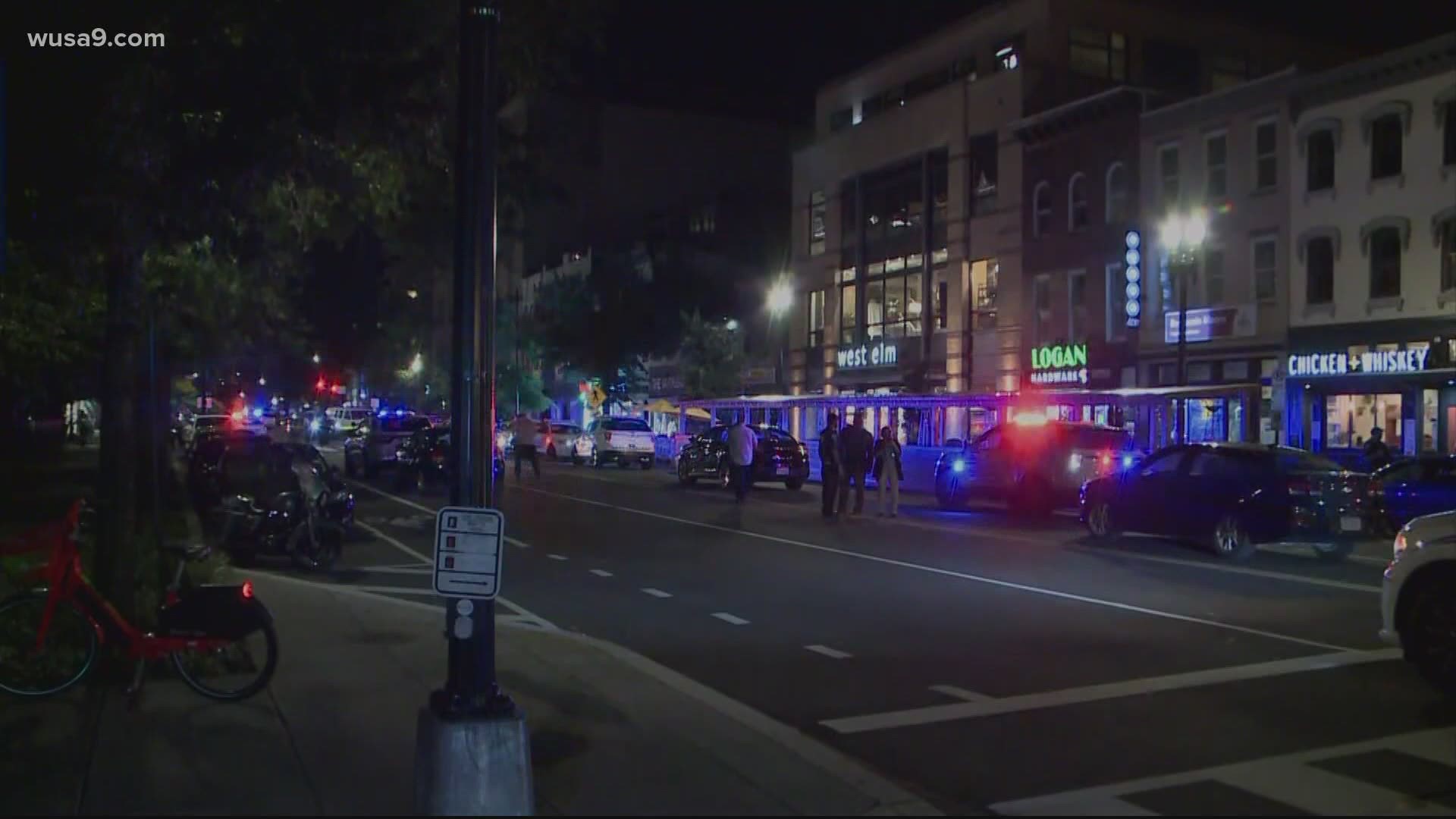 WASHINGTON — A Thursday evening shooting in the lively 14th Street corridor in Northwest D.C. sent many people scrambling for safety, including patrons at Mexicue.

The restaurant was right across from where multiple gunshots erupted at the corner of Riggs Street at around 8:30 p.m. on Thursday. Lynn Wilson, a partner of the restaurant, described the gunshots as fireworks, but the reaction from people nearby alerted her to the severity of the situation.

"We started looking around and quickly realized from the action in the street that there were people shooting across the street," Wilson said "Everyone started screaming to get down and we all hit the deck."

The restaurant was packed with people including out on the patio. Wilson described it as a chaotic scene with her general manager shuffling people to the back of the restaurant.

A home surveillance camera from a neighbor captured the sounds of more than a dozen bullets flying in the air. Two men were injured including an innocent bystander, according to police.

RELATED: ‘What am I going to do with these resources?’ | DC police chief expresses frustration over gun violence, shrinking MPD force

🚨14th Street Shooting >> The sound of *nearly 40 gunshots* appears to be captured on this camera, supporting witnesses who reported far more than 10-12 shots.

"Just sheer happenstance one of our patrons was a doctor and rendered first aid right in the entrance of the restaurant within seconds of him being shot which is incredible," Wilson said.

At least one other witness was there to help assist the injured victim shot in the chest who is expected to survive, according to general manager Shane Weeks.

The restaurant had all of the employees take off but everyone returned the next day, doing it, Wilson said, for the sake of the neighborhood.

Customer belongings remained on the tables the next day, evidence of how quickly the restaurant was abandoned. Guests whose reservations had to be canceled planned to return to show their support, Weeks said.

People’s belongings remain on the tables at @Mexicue. The restaurant was packed when gunshots across the street sent them scrambling for cover. I’m told one of the patrons who happened to be a doctor helped render aid to the injured innocent bystander at the front door. @WUSA9 pic.twitter.com/fxyAzE0eQK

The shooting on 14th Street highlights the ongoing gun violence plaguing the District, less than a week after a shootout outside Nationals Park sent fans hiding for cover, and a late-night shooting near a bus stop on Martin Luther King, Jr. Avenue claimed the life of 6-year-old Nyiah Courtney.

Like other business owners, Weeks feel pessimistic that anything will change.

"We're angry," Weeks said. "I feel like the utter disregard for human safety and life is going to the toilet right now."

Police said they are on the lookout for a Black man wearing a lime green and yellow hooded sweater in connection to the shooting. He may be in a black Honda Civic that allegedly sped from the scene toward S Street.

Police Chief Robert Contee asked that if anyone recognizes the vehicle, suspects or knows anything about the shooting, call 202-727-9099 or text the tip line at 50411. Crime Solvers offers a reward of up to $10,000 for information that leads to an arrest in any shooting in Washington D.C.

Anger would be an understatement for @Mexicue general manager Shane Weeks, who was forced to crawl to the ground for cover alongside his customers after a shooting outside of his restaurant on 14th Street. He's pessimistic about changes in addressing the gun violence. @wusa9 pic.twitter.com/UY8TuV3uWD

WATCH NEXT: Restaurants on 14th Street still busy one night after shooting

24 hours after two people were shot near busy restaurants on 14th Street, businesses are just as busy as usual.