One of the people shot during the shootout on Saturday night was an innocent bystander waiting for an Uber ride, according to police. 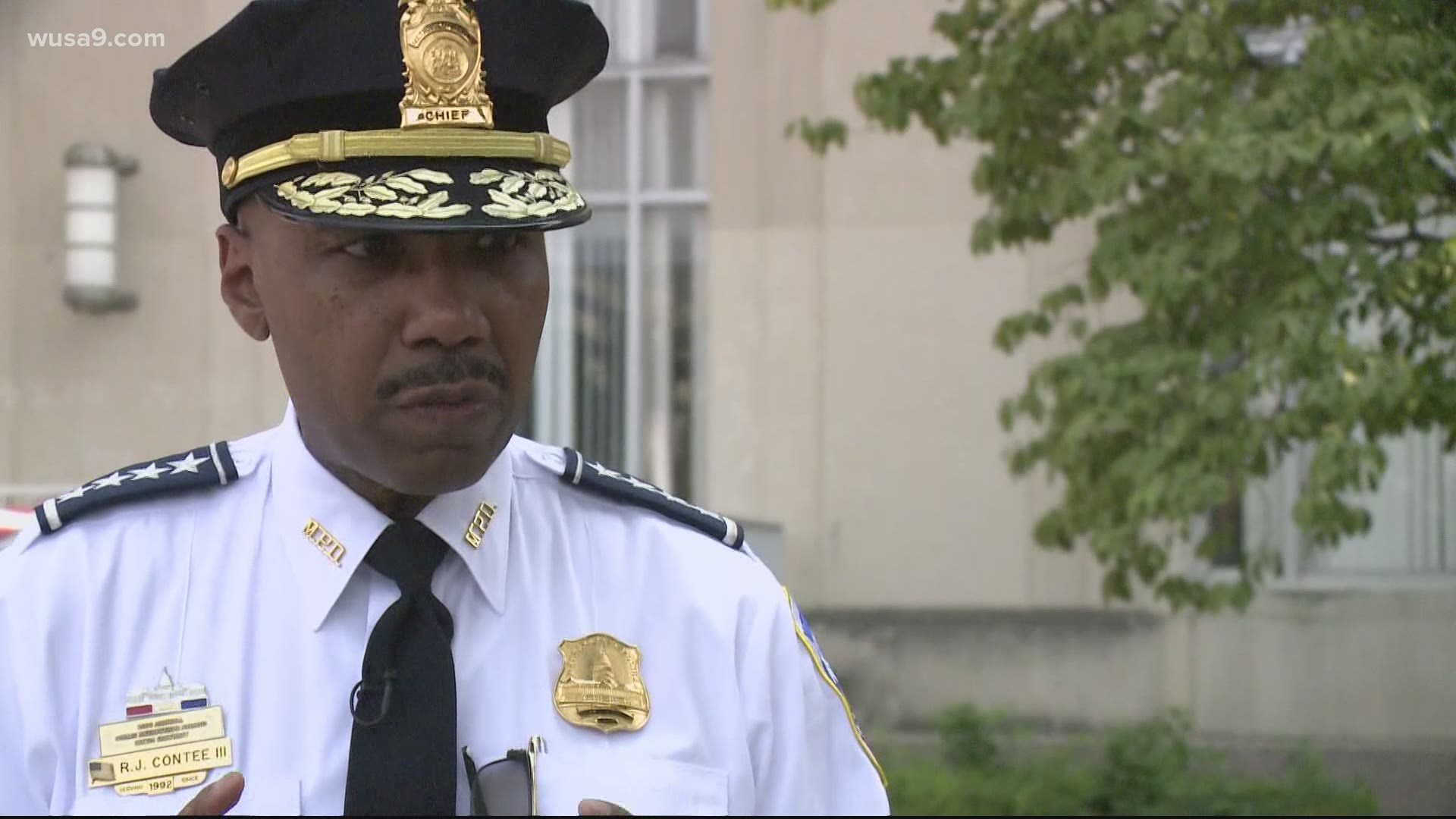 WASHINGTON — Frustrations are hitting an all-time high in the District after three people were injured during a shootout outside the Nationals Park over the weekend.

The shooting forced the game to postpone and sent fans scrambling to get out or hide for cover.

All three of the people shot have been released from the hospital including the two men who were in one of the vehicles involved in the gunfight.

One car pulled up next to another car in the 1500 block of South Capitol Street and engaged in gunfire, according to investigators. The origin of the dispute remains unknown.

The cars sped down the street before one was stopped by police. The two people taken from the car are also "known by law enforcement," according to D.C. Police.

"It appears the two individuals in the car were the target of the shooting," D.C. Police Chief Robert Contee told WUSA9 on Monday. "They have not been placed under arrest but the investigation is ongoing at this time."

Contee also addressed concerns from residents and community leaders worried about the ongoing and increasing trend of gun violence in the city. A six-year-old girl was killed in a different shooting that happened a day earlier in Southeast. In March, an Uber Eats driver was also killed during a carjacking near Nationals Park.

People who have lived in the community for many years or even decades watched the many changes including development but violence continues to permeate.

"A person who commits a violent act, should they be walking in the community with an ankle monitor on, is that acceptable to the community?" Contee posed. "I think that's something that needs to be looked at. I think the reset button needs to be pushed because we have to take a holistic look at what's in the best interest of the community in terms of how we hold people accountable."

Advisory Neighborhood Commissioner Edward Daniels said he was at a restaurant when he witnessed fans running out and even entering businesses for safety. He suggested the solution needs a citywide and even legislative approach that should require visiting each neighborhood and block to determine the root causes. Daniels wants to tackle how the culprits are gaining access to the guns.

"We can't allow this to rest all in the hands of MPD to enforce because there's no way they will be at every street corner at every event all the time," Daniels said. "So we need to figure out within ourselves what's going on in our community that's causing this. I'm tired of the violence. It's ridiculous. It's stupid."

Another commissioner in that area of D.C., Jared Weiss, only lives two blocks away from the shooting. While he hopes the incident would spark actual change, Weiss is skeptical whether officials will take the necessary steps in creating a permanent solution.

His ANC district has hosted a committee in February to specifically discuss the ongoing gun violence.

"Actions not words because it's great we can all talk, but until we can start doing something, nothing is going to change," Weiss said. "Until it seems people are actually taking it seriously, I don't see a change."

Chief Robert Contee reacting to the shooting that left three people injured outside Nationals Park and sent fans scrambling for safety. He tells me the city needs more accountable measures in place to tackle the gun violence.

"I think the reset button needs to be pushed."@wusa9 pic.twitter.com/J6aLguHMde

"We can reform the police, that's great, community people can call tips in, that's great, but if we're letting these people out in the back door and not being held accountable for their actions, that's another issue we have to dig deep into," Contee added.

“We stand together against senseless acts of gun violence in the city we love. Gun violence — no matter where it occurs in our city — is unacceptable and will not be tolerated. The Metropolitan Police Department (MPD) continues to work closely with National’s security to ensure the continued safety of residents, fans, workers and all individuals in the area.

“While MPD’s investigation is ongoing, it appears the incident involved a dispute between individuals in two vehicles. MPD does not believe the Washington Nationals, the ballpark or fans were the target. Anyone with information about those involved is asked to contact MPD at 202-727-9099 or text 50411.

“We appreciate the tremendous cooperation of the fans at Saturday night’s game who did all that was asked of them under very stressful circumstances, and the police and the fire emergency medical personnel who responded. We are committed to a safe, enjoyable experience for all.”