‘What am I going to do with these resources?’ | DC police chief expresses frustration over gun violence, shrinking MPD force

Chief Robert Contee said that the force is currently short by more than 200 officers compared to last year. 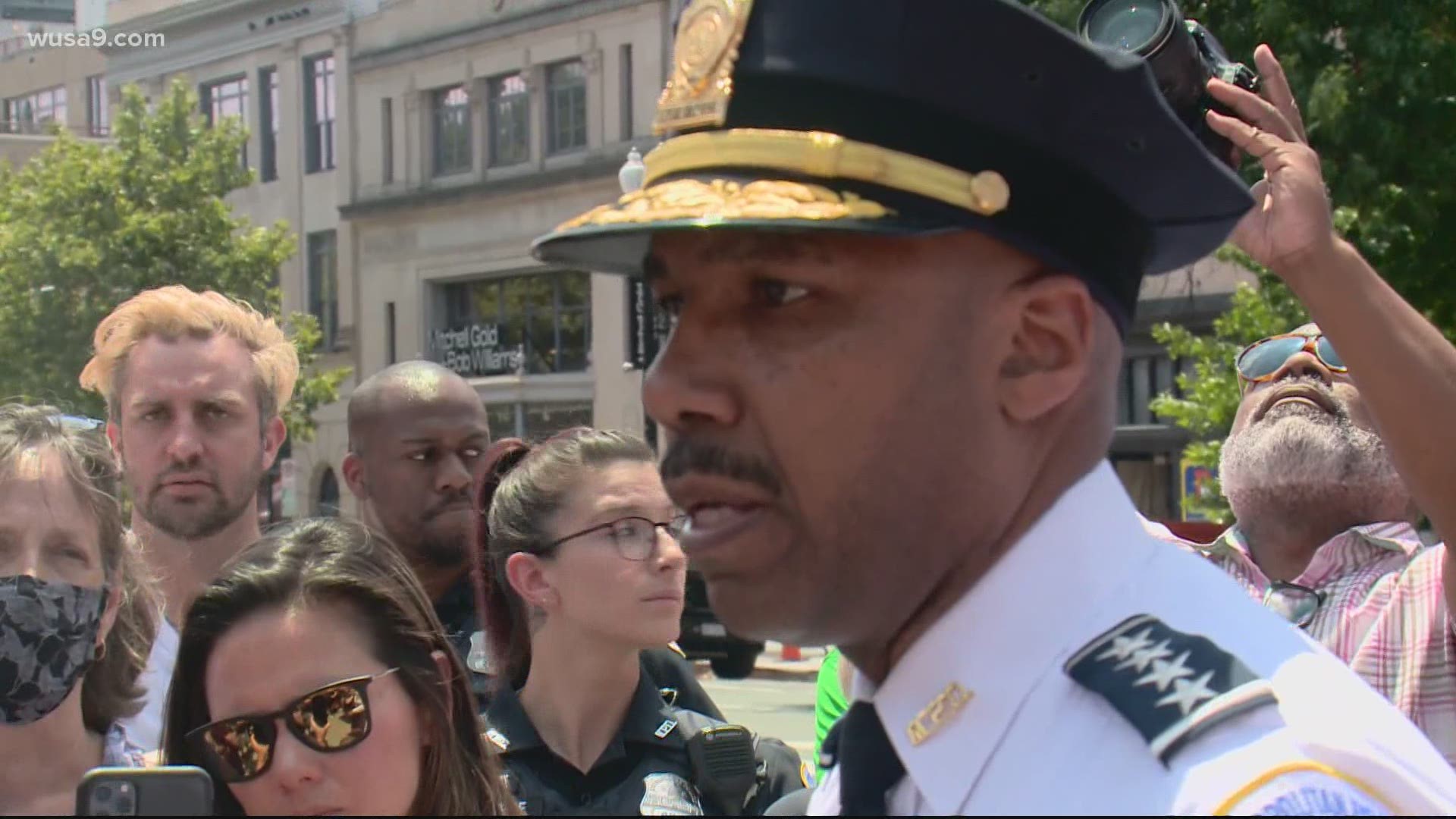 WASHINGTON — D.C. Police Chief Robert Contee is fired up about the violence in his city, which he made clear during a brief, but impassioned, press conference Friday. The chief hit the pavement in the busy 14th Street corridor to talk to business owners in the aftermath of a shooting Thursday evening that injured two men and sent dozens of patrons scurrying away from crowded restaurant patios as gunshots rang out.

“People are really mad as hell right now, and I don’t blame them, because I am too. That’s the reality,” Chief Contee said. “I think people are sick and tired of being sick and tired. I think that people want to ensure that there is accountability for what’s happening in our communities.”

The shooting happened near 14th Street and Riggs Street NW, just before 8:30 p.m. Two unidentified men were injured in the shooting and ultimately found conscious and breathing, D.C. Police said. One of the men reportedly was shot in the arm and the other was shot in the chest, according to police. Both men were taken to a nearby hospital for treatment.

An Amazon Fresh grocery store, which had opened less than 24 hours before, was also harmed in the shooting, although the police report did not specify in what way.

“I’m asking community members: join with me,” the chief pleaded. “My voice is only but one voice and I’ve been saying this for a long time … I’ve been in this police department for over 30 years. This is the same movie from when I was a boy growing up here. When are we going to do something different? And what different looks like - what does not happen here - is accountability.”

The chief added that when he talks accountability, he isn’t referring to mass incarceration, but to holding individuals who are endangering the lives of everyone in the community accountable.

“I’m talking about those individuals who brazenly use illegal firearms in our street,” Contee said passionately, going on to talk about the “shrinking workforce” of the department that is currently short more than 200 officers, as well as their generally limited resources.

“What am I going to do with these resources?” he said. “I know that’s a long answer - but that’s the truth.”

The Chief also said the outrage seen in Logan Circle needs to reverberate through the entire city with shootings that occur everywhere in the city.

“Last year we had over 922 people shot in our city last year," Contee said. "198 people were murdered in our city last year.  This should be shocking to the conscience of every person in our city, I don't care where you live. This got the attention that it’s gotten now because it's happened where it happened, because we had an incident at the Nationals stadium. But this issue, this issue that’s crossing our city, there are too many guns in Washington D.C."

The chief continued to remind the public that if anyone knows anything about the shooting or suspects, they need to call the department at 202-727-9099 or text the tip line anonymously at 50411. Crime Solvers is also offering a reward of up to $10,000 for information in any shooting in Washington D.C.

Chief is asking the justice system to do its part to ensure criminals are being held accountable.
He says this is the same movie that’s been going on for decades. He says people need to be held accountable in order for communities to be kept safe.

A restaurant customer who ducked for cover during the shooting told us about how they felt after everything unfolded.

“I don’t care if it was targeted. Any one of those bullets could have hit me or someone else nearby,” the person told WUSA9's Tom Dempsey.

Mexicue General Manager Shane Weeks said one of the patrons in his restaurant, who happened to be a doctor, began helping an innocent bystander shot in the chest, but said people ran from his restaurant so quickly, belongings still remain on tables a day later.

Chief Contee says officers and every available resource they have will be out this weekend on patrol and working on investigations, working to solve them.

The District is grappling with a summer that has been scorched by violence, especially in recent weeks.

A shootout outside of Nats Park during a home game against the San Diego Padres sent some fans dashing for the exit and cowering in the stands on July 17. As fans headed back into Nationals Park on Sunday, it was hard for some to shake off images of the shooting that left three injured.

Eight-year-old Faris Nunn was sitting at the third baseline with her parents and younger brother when shots rang out outside that very gate.

“I saw people looking that way, and I didn't know what was going on until I heard someone say get out, so I just started going under the seat," Nunn said.

When asked how she was feeling through all of that, she said: "It was my second shooting. So I was kind of prepared ... because I always am expecting something to happen.”

Southeast and Southwest D.C. have undergone major changes in the last decade, with Nationals Park and Audi Stadium going in and high-rise apartments going up.

However, across bustling Capitol Street, a community lives on.

Some people who have lived in the neighborhood for decades said violence in the community is a common occurrence beyond what happened outside of Nationals Park.

The night before shots were fired outside the ballpark, 6-year-old Nyiah Courtney was shot to death in Southeast D.C. while walking with her family up Malcolm X Avenue, planning to arrive at a bus stop on Martin Luther King, Jr. Ave.

“My niece died in my arms," the young girl’s uncle, Darron Paige, said. "Her mother seen her pass away in her face. My brother, he didn’t know what to do.”

Many residents of the District are at a loss; debates are flaring on social media about who or what could be to blame and exactly which solution is best when it comes to tackling the city’s struggles with gun violence.

Hearing about these shootings in DC takes me back to when I was a kid/teenager. It hurts seeing ppl in your home city become victims of gun violence. As children and teenagers, my brother & I saw ppl get shot & heard gun shots often. To this day, I still think about those times

Losing track of how many shootings there have been in DC, in July alone.

We are in a public health & safety crisis all over the country. The excuse that crime in general is going down is no acceptable answer.
We need intellect, socially responsible resolutions to the hand gun epidemic in the city & around the country.
Who will step up?

The worst expression, “that’s why no one lives there”…no people do live in the neighborhoods, and they need attention and help…not more policing and “tough” judges.

The code is off in the streets. The real need to sit down and come to a agreement. No protest will fix the crime in DC till the Ones running the streets come to some type of term and turn these suckers in. Let the kid killer go he ain’t worth the operation

"I'm outraged, the chief is outraged, and the community should be outraged," she said.

The Metropolitan Police Department recently announced a launch of a new community-focused patrol unit, which will be made primarily of officers on mountain bikes and scooters, which look like smaller motorcycles.

Contee said the patrols will be deployed to areas data shows are experiencing higher volumes of crime, emerging crime trends, or significant events.

Columbia Heights/Parkwood areas, Bloomingdale, and the Washington Highlands neighborhood will be the first three areas of the unit’s deployment, as selected by MPD crime analysts.

Chief Contee said he’d heard from community members that officers weren’t engaging, but rather sitting in their squad cars.

Contee said Friday that all of his department’s available resources will be deployed in the city over the weekend, patrolling neighborhoods and investigating numerous open cases.