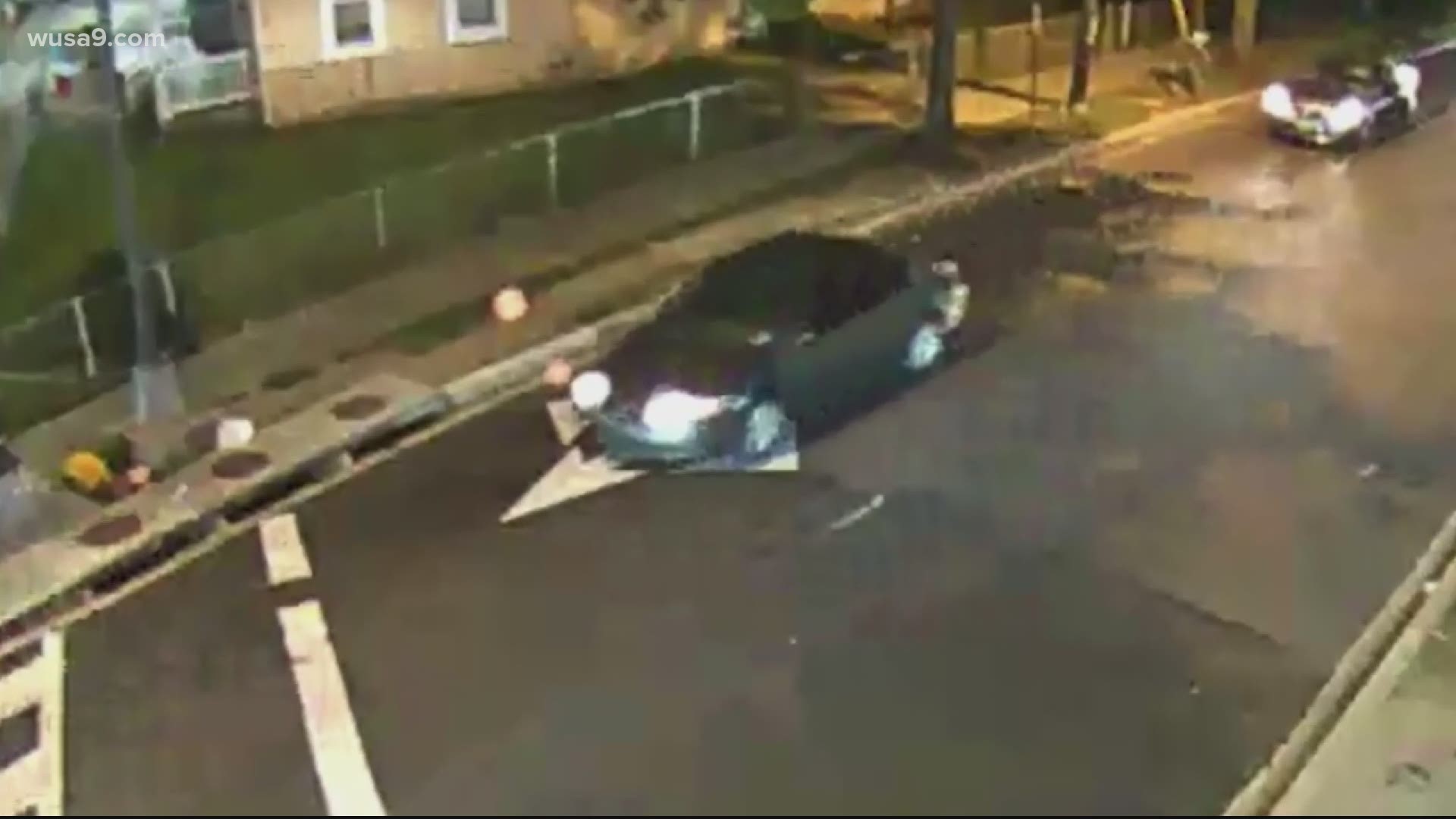 WASHINGTON — Six-year-old Nyiah Courtney is dead after a shooting that happened late Friday night in Southeast D.C., according to D.C. Police.

DC Police said on Monday that they have recovered the vehicle of interest that may have been used in this case, described as a silver or grey four-door sedan.

The recovered car was found by police shortly after a press conference Monday. According to Chief Contee, the car was on fire when police recovered it in the 500 block of Eastern Avenue Northeast. Chief Contee said forensic crews are going over the burned car to see if there are any leads into who may have been driving when the shooting occurred.

Police said that up to a $60,000 reward is available for anyone who can provide tips or information which leads to the arrest of the person or persons responsible. Those with information can call the police's Command Information Center at 202-727-9099 or text anonymously to 50411.

A video of the vehicle was released on Twitter after a news conference that was attended by D.C. Police, D.C. Mayor Muriel Bowser, ATF and FBI officials.

Officers heard shots of gunfire at the corner of Malcolm X and MLK Boulevard in the 2900 block in Southeast D.C. around 11 p.m. Friday, according to D.C. Police Chief Robert Contee III during a Saturday news conference.

When people started to scatter and disperse in the area, officers arrived on the scene, they found six gunshot victims. Five adults were transported to area hospitals with non-life-threatening injuries, and Nyiah was the only one pronounced dead on Friday, police said.

Chief Contee confirmed that Niyah's mother was also injured in the shooting. She remains in critical condition, police say.

The police chief condemned the shooters, calling them cowards and urged community members to come forward.

"I am sick and tired of being sick and tired. The cowards who committed this crime came into this community without any regard for human life, without regard for Nyiah's life and opened fire," the chief said. "That cannot and will not be tolerated. Residents and neighbors do not deserve to be torn apart by senseless acts of violence. It is time for us to say enough is enough."

Video of vehicle can be seen here: pic.twitter.com/kyF5vZr8NI

D.C. Police officers that initially arrived at the shooting tried to save Courtney, even putting her in a police cruiser and taking her to a hospital, knowing she was in a dire situation, according to Contee.

There have been no arrests in the case, police said and the suspect is still at large. No motivation has been identified in the shooting as well, according to authorities.

Mellon Market owner Ephrame Kessaye said he's watched Courtney grow up as she and her family visited his corner store on the same block.

“When I heard it was the little girl who I really know, from, when she was a little girl. It was very sad. It was really sad. And I was my heart was broken," Kessaye said.

He said she nicknamed him Curly because of his hair.

“You know, we give five we give hugs, you know, bring her and get slurpees and ice creams and whatever the case it could be because she's just very loving and something that he can really do for her," Kessaye said.

He wants the city to do something to address the crime in the area.

In the meantime, he said he plans to help the family however he can.

Community members challenged Mayor Bowser at the news conference to help them get rid of an abundance of liquor stores in that area.

During the news conference on Saturday, people in the crowd mentioned the large number of liquor stores as an issue that plays a part in the crime rate for that community.

A Southeast D.C. community protested the renewal of a liquor store’s license, Mart Liquor, on the same corner earlier this year in May 2021.

“This is a community that is saturated with liquor stores. And looking at the D.C. Health Equity Report published by Mayor Bowser, it says that areas that are suffering from low economic development are at high risk of violence when they also are coupled with saturated, high alcohol density institutions,” Salim Adofo, Chairperson for Advisory Neighborhood Commission 8C said. “And so what we see is there are about seven liquor stores in this corridor and we looked at the MPD crime data and within 2,000 feet of this liquor store, there has been one murder every 90 days.”

D.C. Police crime data showed there had been 25 homicides in the three-quarter-mile radius surrounding Mart Liquor over the last two years at the time in May.

RELATED: It's been 3 years since 10-year-old Makiyah Wilson was killed in DC