The lawsuit seeks a court-ordered injunction forcing the police department to collect stop and frisk data as required by the NEAR Act, passed in 2016. 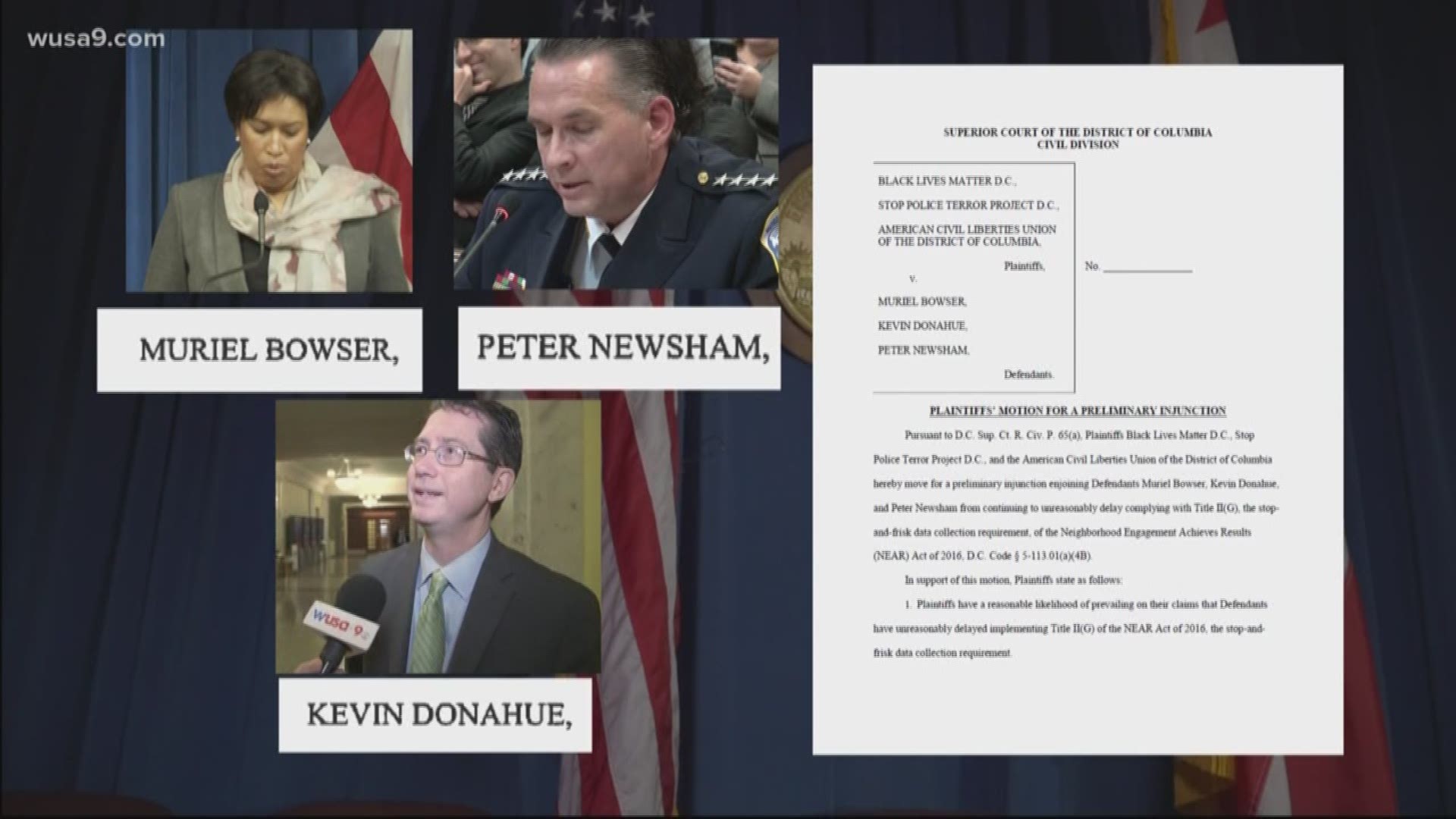 WASHINGTON (WUSA9) — The D.C. government is being sued for its failure to collect comprehensive data about stop and frisk by the Metropolitan Police Department.

“I think that it’s extremely unfortunate that we had to take this step,” said Eugene Puryear of Stop Police Terror Project DC. “That they didn't just do what they were supposed to do when the council required it.”

The lawsuit, filed in the D.C. Superior Court by the American Civil Liberties Union of the District of Columbia, Black Lives Matter DC and Stop Police Terror Project DC, names Mayor Muriel Bowser, Police Chief Peter Newsham and Deputy Mayor Kevin Donhue as defendants. It seeks a court-ordered injunction forcing the police department to collect stop and frisk data as required by the NEAR Act, passed in 2016.

“They are not complying with the law,” said ACLU DC executive director Monica Hopkins. “To have a government agency that doesn't think that they need to comply with the law is deeply troubling. Now it is time to turn it over to a court and have a court enforce them collecting the data in a way that makes them follow the law.”

A spokesperson for the city's lawyer, DC attorney general Karl Racine, said the city would not comment on the pending litiation.

"We are reviewing the complaint and will respond in court," said OAG spokesperson Robert Marus.

LaToya Foster, Mayor Bowser's Press Secretary, added “We are working with our partners on the Council to solidify an investment in collecting data.”

The lawsuit comes five weeks after the groups sent a letter to the city government demanding records and data about stop and frisk by the D.C. Police Department, or the department’s plan to finally start collecting the stop and frisk data required by the NEAR Act. The letter warned of the lawsuit if the city did not produce those records.

That demand letter cited WUSA9’s ongoing investigation into stop and frisk in The District, which found 83 percent of police stops in the district between 2010-2016 involved a black person. It also found that the police department had failed to follow the stop and frisk data collection requirements included in the NEAR Act.

“These data points are real everyday people who are being seriously affected by the practices of policing here in the District of Columbia,” Puryear said. “And it’s extremely important that we actually keep this data and keep it the right way.”

At a D.C. Council hearing March 29, one day after the ACLU sent its demand letter to D.C. government, Chief Newsham admitted the department didn't have a system, or even a plan in place, to start collecting the stop and frisk data.

D.C. council did give the police department $150,000 back in 2016 to pay for whatever changes were needed to start collecting the stop and frisk data as required by the NEAR Act. At the time that was the amount D.C. police said it would cost to make the required computer system upgrades.

Councilmember Charles Allen, chairman of the Committee on the Judiciary and Public Safety, said it appears D.C. police spent that money on something else. Last week, WUSA9 obtained a letter from Mayor Bowser to D.C. council asking for twice that amount, $300,000, to pay for the computer system upgrades for D.C. police that would finally allow the department to start collecting the required stop and frisk data.