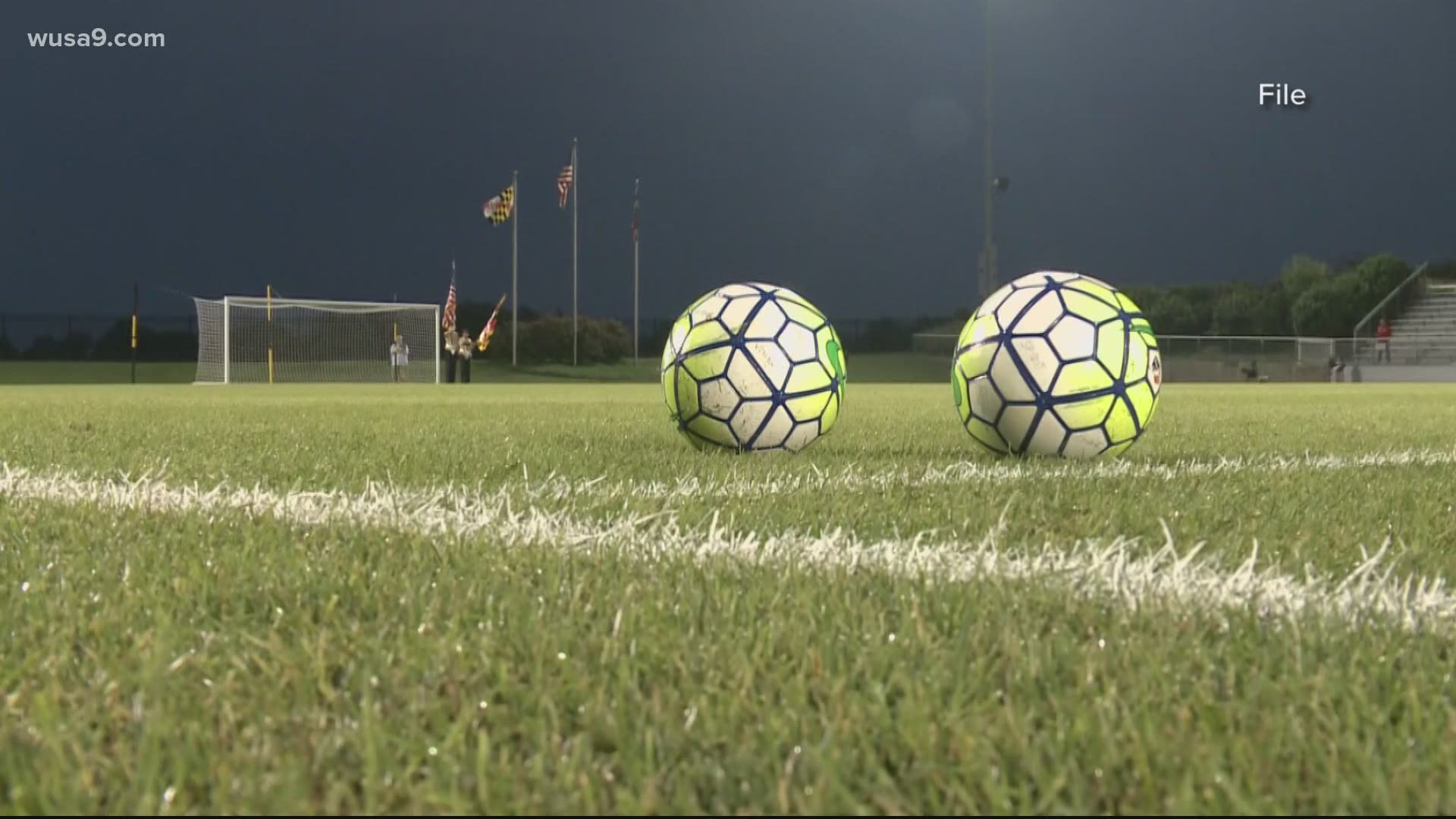 GERMANTOWN, Md. — A popular regional soccer tournament in Montgomery County, Maryland, has been canceled due to the coronavirus’ spread.

Dr. Earl Stoddard, director of the Montgomery County Office of Emergency Management and Homeland Security Management, said the county decided to rescind the tournament’s letter of approval to play this weekend following the positive case discovery.

“I want to make it very clear, [the SoccerPlex’s] plan was very robust and they made every reasonable effort they could to make that tournament as safe as possible,” Stoddard said. “But, simply put, there was at least one person who participated in last week's tournament who was infected and did likely expose some number of other participants.”

Stoddard said the Montgomery County Health Department’s investigation into last weekend’s incident is ongoing, and he added that the tournaments had been reviewed and approved multiple times dating back to the summer.

He said the decision to rescind the approval for the boy tournament came after the county reviewed the event’s plans Wednesday morning.

“We made a good faith effort to get them into a good place to proceed, allowed them to proceed last weekend,” Stoddard said. “But based on the experience so far, they did a good job trying to implement what they could do but weren't able to limit the potential exposures. And, with that in mind, we decided to rescind their letter of approval.”

The girl’s tournament hosted more than 200 teams with 3,600 players from Ohio, West Virginia, Pennsylvania, New Jersey, Virginia and Maryland, according to Maryland SoccerPlex Executive Director Matt Libber. The boy’s tournament also planned to attract teams from across the country.

Libber said while the Maryland SoccerPlex was to host the tournament, it was to be run by the Bethesda Soccer Club.

He said a player felt sick prior to playing a game in the girl’s tournament Friday. Libber said the tournament’s officials discovered the player was feeling sick on Saturday.

He said after that the player’s entire team was sent home as well as the team it had played on Friday.

“The way that tournament is set up, they're only playing one game a day,” Libber said. “So we knew exactly what field that team was on and who they played against.”

Libber said all referees, officials, and other teams that encountered the infected player’s team were alerted to the positive test as well. He said the entire tournament was not alerted with a mass email or message because the case did not affect the entire tournament.

“Anyone who would have come into contact with that team was notified,” Libber said.

Stoddard added there was no evidence to suggest to the player who fell ill was aware they had tested positive for the coronavirus prior to playing Friday’s game.

Libber said he felt participants in the girl’s tournament had shown great compliance with the tournament’s requirements for them to wear masks and practice social distance.

He said the Maryland SoccerPlex to receive an email from the country Wednesday that the letter of approval for the boy’s tournament had been rescinded.

“If we could have gotten engaged with earlier on, maybe we could have found a solution and still had the tournament this weekend,” he said.

Libber said the preliminary economic impact of the girl’s tournament for Montgomery County was $1.3 million dollars.

“I just want to remind people that both the Bethesda Soccer Club and the SoccerPlex, we’re nonprofits,” he said. “We're not here to make money and line our own pockets. The money we produce here goes straight back into programming.”

WUSA9 reached out to the Bethesda Soccer Club Wednesday afternoon but did not receive a response.

However, Brad Roos, tournament director of the Bethesda Premier Cup, did release the following statement on the tournament’s website:

Unfortunately, I received a letter at 10:30 a.m. this morning that the Montgomery County Health Department has rescinded our approval to hold the tournament this upcoming weekend. The reason, as we could expect, “was due to the dramatic rise in COVID-19 transmission in Montgomery County and the National Capital Region”. I spoke directly with the health committee and this decision was not made due to anything that our club failed to follow regarding the protocols that we had instituted.

For the past four months, we have worked extremely hard on setting up the protocols and infrastructure to hold a safe and positive weekend. While we are disappointed, the goal all along was to provide a showcase for the older players since most of these larger events had been canceled in the past nine months, but not at the expense of any player's health.

We are looking at options for the spring and summer regarding a showcase for the older boys and will let you know what those plans will be in the foreseeable future. In addition, we will be providing full refunds to the teams, please give us at least four weeks to process and send out.

Please contact me back if you have any questions concerning this matter.