The third generation family owners say they went from laying off 80% of their staff to hiring even more than before the pandemic. 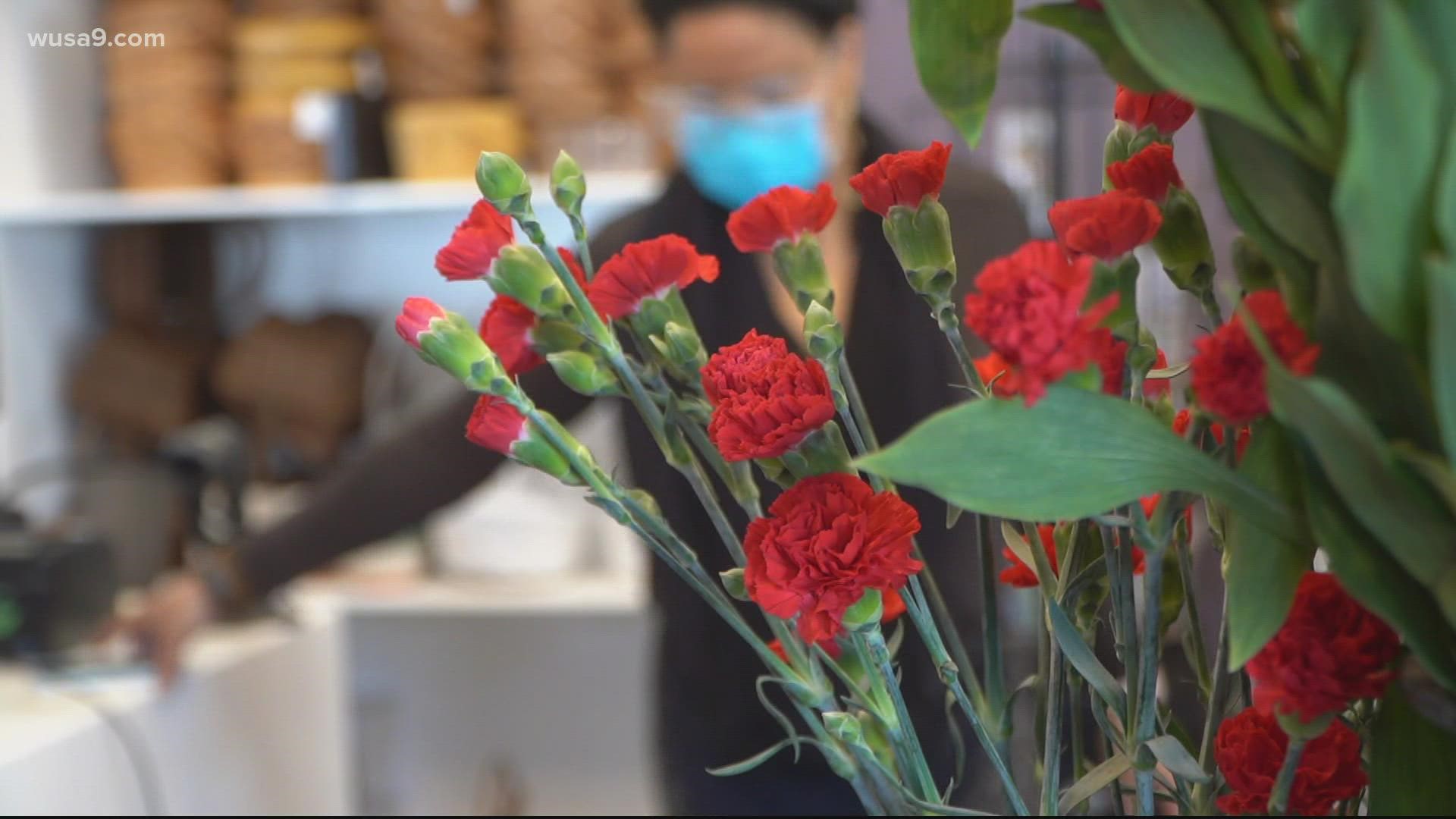 After 76 years in business and three generations of family owners, Lee's Flower and Card Shop in D.C. worried the pandemic might force them to close. One year later, business is better than ever.

"It’s been a blessing," co-owner and granddaughter of the original owners, Stacie Lee Banks said. "Valentine’s Day... was 30% higher, and we’re just so grateful for that."

But -- when COVID-19 hit in March -- Stacie and her sister (and co-owner), Kristie Lee Jones, were just praying the shop would survive.

"It was devastating," Kristie said. "And it was just like a halt to the business.”

Their dad, Richard Lee, originally joined the business in 1968 -- around the time of the riots -- and he, too was concerned.

“Well when it first hit, nobody knew what was going to happen," Lee said. "It was like a ton of bricks falling on your head.”

Credit: Jess Arnold
The 76-year-old D.C. staple, Lee's Flower Shop is now seeing a bloom in business after COVID at first threatened to shut them down.

RELATED: TIMELINE: It's been 1 year since the first COVID case was identified in the DMV

It was a new chapter for this longstanding business that Lee's parents, William and Winifred Lee, set up in 1945.

“You don’t see a lot of 76 year old businesses," Stacie said. "And we’re also grateful to be a Black-owned business in these times.”

She said her grandparents purchased the building they occupy now on U Street in 1968.

"I have seen several changes on U Street, because U St. used to be the mecca for Black folk, because Black folk weren’t welcomed downtown," Richard Lee said. "This was our downtown, the U Street corridor, 7th street, 14th street and 8th street. That’s where Black folk were welcome. There were 300 Black-owned businesses in this area. It was thriving.“

And so was their flower shop. He said his parents became renowned across the country -- and even delivered arrangements to the White House.

The onset of the virus threatened that storied history.

Stacie said they had to lay off 80% of their staff in March 2020...with demand only mounting to a maximum of 10 deliveries a day.

She and Kristie took turns manning the shop and alternated between two drivers to try to keep everyone safe.

Come May, however, Stacie said the industry took a turn for the better as businesses and society began to start re-opening. In the next few months, they would be making more than 50 deliveries daily.

"Since then, we’ve had to hire more people to keep up with the volume, and we feel that’s such a blessing," Stacie said.

But the business' bloom comes with a bittersweet note.

“A lot of the orders have been for funeral services, and a lot of them have passed of COVID," she said.

Constantly making memorial bouquets reminds the family how lucky they are. Richard said he contracted COVID right before it became a widely-known virus in March, after a ski trip with hundreds of others.

He's recovered -- and even recently received his first vaccine.

From his personal health to the health of the business, the Lees --and much of the flower industry, according to Stacie -- have rebounded.

Unfortunately, that has not been the case for so many other businesses.

A Harvard-led economy tracker reported a near-44% drop in open D.C. businesses as of February 22.

The Lee's said the pandemic has certainly brought changes to their shop. From most of the store being cordoned off from customers to constant cleaning and disinfecting to a website revamp, they've worked hard to pivot.

“We not going to be able to go back to the way things were... It’s going to be different, but it’s going to be better," Richard said. "I think we need to look at it from the point of view, let’s make it work. Let’s make all these new things that we’ve had to do and use. Let’s make them part of the solution, because it’s necessary."

As the sisters have started to receive orders for weddings again, they're optimistic.

They plan to make sure Lee's is around for their kids to take over and carry on the legacy.