The most popular restaurant in America is here in DC

The Pennsylvania Avenue location of Founding Farmers is the most booked restaurant in the country, according to data from reservation website OpenTable. 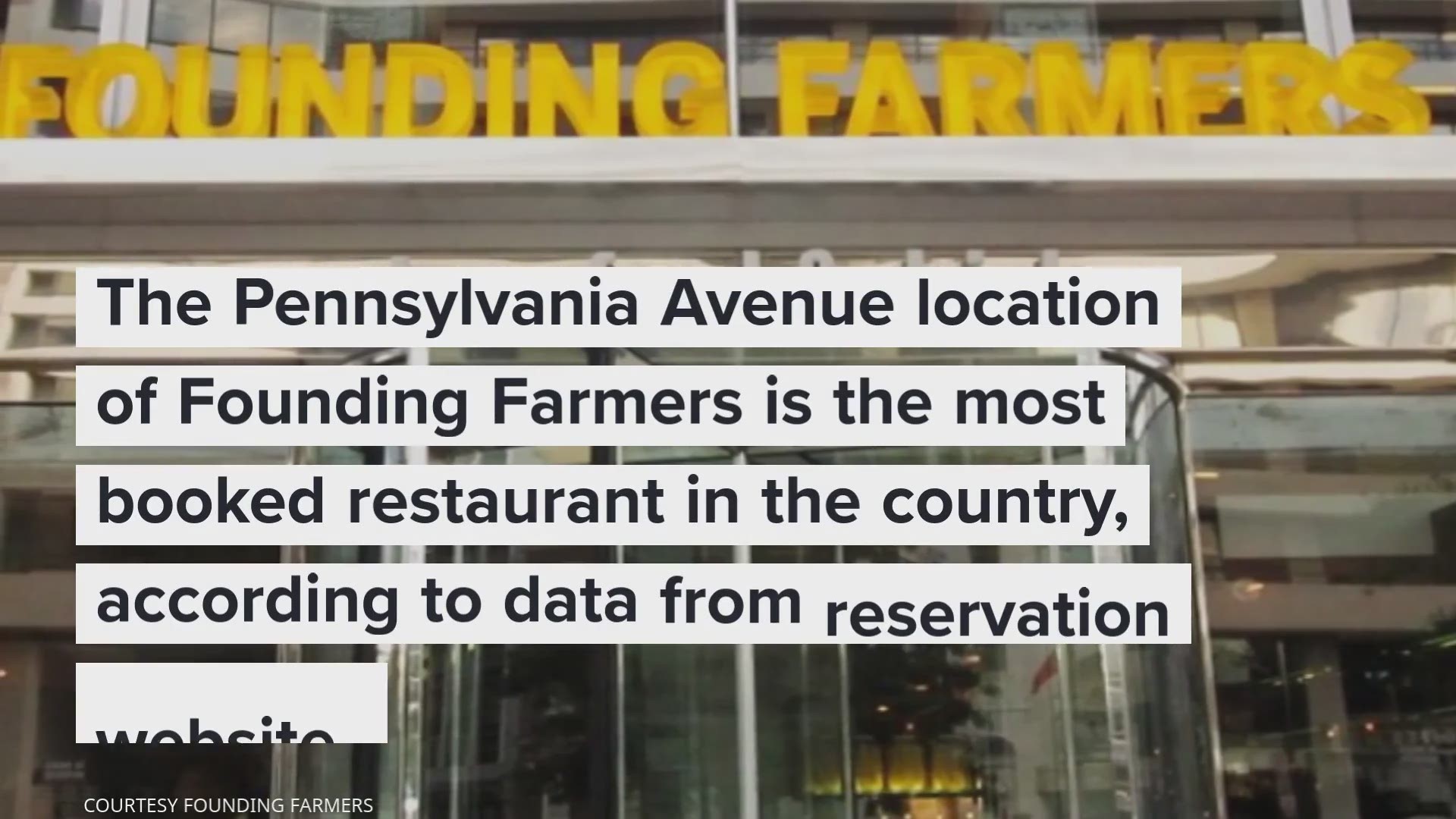 WASHINGTON — In a society obsessed with uncovering the next best thing, capturing public interest for more than a few weeks is the holy grail of the restaurant industry. To be in business for 11 years and still be the hottest ticket in town, well that's nearly unheard of.

Online reservation platform OpenTable recently released their list of 2019's most booked restaurants in the country, and D.C. happens to be home to number one: Founding Farmers. The company's flagship restaurant on Pennsylvania Avenue, located three blocks from the White House, opened its doors in 2008, and has no issue filling seats.

A spokesperson for the farm-to-table restaurant said they average 1,000-1,500 diners per day. Founding Farmers reservations were booked via OpenTable 466 times on Friday alone.

OpenTable said they make their list after reviewing more than 400,000 diner reviews a month; Founding Farmers currently has more than 28,000 reviews on OpenTable, with a 4.4 (out of 5) rating.

"The secret sauce is really the culture and the group that we’ve built," Dan Simons, co-founder of Farmers Restaurant Group, said. "Our commitment to putting mission over profit is how I think we've maintained this level of connection to, and loyalty from, our guests."

Jane Fonda and actress Taylor Schilling happened to be two of those guests Friday afternoon, stopping in after protesting for climate change on Capitol Hill.

Credit: Courtesy Founding Farmers
"If we were to take our 'Bacon Lollis' off the menu, it would be complete mayhem," Simons said.

Simons said he has employees who have been with him for 11 years, since the doors opened on day one, and that's what he is most proud of.

"The awards and recognition are nice and all, but the real magic is the people doing the work every day," Simons said. "Food tastes so much better when the people bringing it to you are happy."

Despite Founding Farmers continued popularity, not everyone in D.C. is smitten. In 2016, the Washington Post's food critic, Tom Sietsema, infamously slammed the restaurant with a zero-star review, though he did take notice of the masses waiting to get in, commenting that the "busy restaurant doesn’t need hosts so much as air traffic controllers." It took the critic four solo lunch visits, and two weeks' notice, to secure an actual table for a group at 6 p.m. on a Monday.

When asked about the daily impact of positive or negative critic reviews, Simons wasn't shy with his thoughts.

"I think the critic that matters these days is the voice of the general population," Simons said. "I definitely see an impact from the average star rating of 28,000 diners on open table. I think that has more lasting impact and credibility than one person who happens to have a keyboard and a column."

Credit: Courtesy Founding Farmers
The Cucumber Delight is made from vodka distilled and bottled at sister restaurant, Founders & Distillers, also in D.C.

The man behind every dish at Founding Farmers since 2008 is Chef Joe Goetze, and he's responsible for cult classics such as the "Glazed Bacon Lollis" and the cornbread served with honey butter.

"It would be complete mayhem if we took the 'Lollis' off the menu," Simons said. "And our cornbread may not be complicated, but it hits you right in the heart."

Now that Goetze helps out with all seven of the Farmers Restaurant Group locations as the senior vice president of culinary development, Founding Farmers has tapped Chef Alba Marroquin to lead the kitchen at Pennsylvania Avenue, a role she's had for the last five years.

OpenTable has named Founding Farmers the most booked restaurant in America every year from 2013-2017, but didn't release a list in 2018.

Restaurant Business magazine also listed Founding Farmers on its annual list of the 100 highest-grossing independent restaurants in the country, at number 37. The list reports that the D.C. location racked in $18,218,145 in sales, and served 596,348 meals, with an average bill of $36.

While seats at the bar are always reserved for walk-ins, the rest of the dining room is available for booking on OpenTable. Founding Farmers suggests those eager to book a reservation begin looking at least a week out from the desired date.

Simons, however, had his own advice on how to really snag a spot.

"Say something nice to me on Twitter," Simons said, "and I’ll get you a reservation anytime you want."

RELATED: DC restaurants seeing up to 60 percent less business due to government shutdown