The DCGFFL has more than 300 participants and includes some of the area's top athletes.

"I want a post on the outside and a wheel on the inside," commands MacPherson on a patch of grass at DC's West Potomac Park.

The Washington Monument towers over our huddle as a fitting salute to our country's first Commander-in-Chief. Meanwhile, as I take my marching orders from the football commander before me, I am epically confused by the terminology yet confident enough in my athletic prowess that I can fake it until I make it.

Plus, I'm doing a TV story. So, despite the required number of takes, we're not wrapping up until I catch at least one pass.

Just out here throwing the ball around w/ the DC Gay Flag Football League @DCGFFL
Story to air on @wusa9 for #PrideMonth
Took a pass from a former D1 QB.
Their traveling team is incredibly disciplined has a winning pedigree 🏈 🌈 pic.twitter.com/JuweNuVDKp

After a few plays, MacPherson hits me in the air on a three-step and pivot play. I daftly evade defensive pursuers and power towards the goal line brimming with pride.

It's the pride one feels when making a play that scores your team a few coveted points.

But there's another point of pride all together that reigns over our section of the Tidal Basin on this night.

I'm playing in a practice with DC's Gay Flag Football League and surrounded by athletes who are proud of who they are as LGBTQ+ individuals. They are here to unapologetically be themselves and support their friends and teammates for who they are as well.

RELATED: Here's a list of events to celebrate Pride Month in DC

The DCGFFL is the premier LGBTQ+ flag football organization in the D.C. metro area with a rich history and strongly engaged community. The group has a Sunday League, a Recreation League and a Travel Program which sends up to five travel teams to compete nationally around the country.

"We've lost one time in the last three years," said JC Adams, when I asked just how serious and competitive the league is. "D.C. is the team to beat."

Adams also serves on the DCGFFL's Board of Directors.

A few players, like Jeremy Steslicki, have been around since the creation of the league in the 2010.

"There's something about the physical challenge of playing football and the adversity you have to face," said Steslicki, who was inducted into the National Gay Flag Football League Hall of Fame in 2020. "When you face it and overcome it as a team its a really incredible feeling." 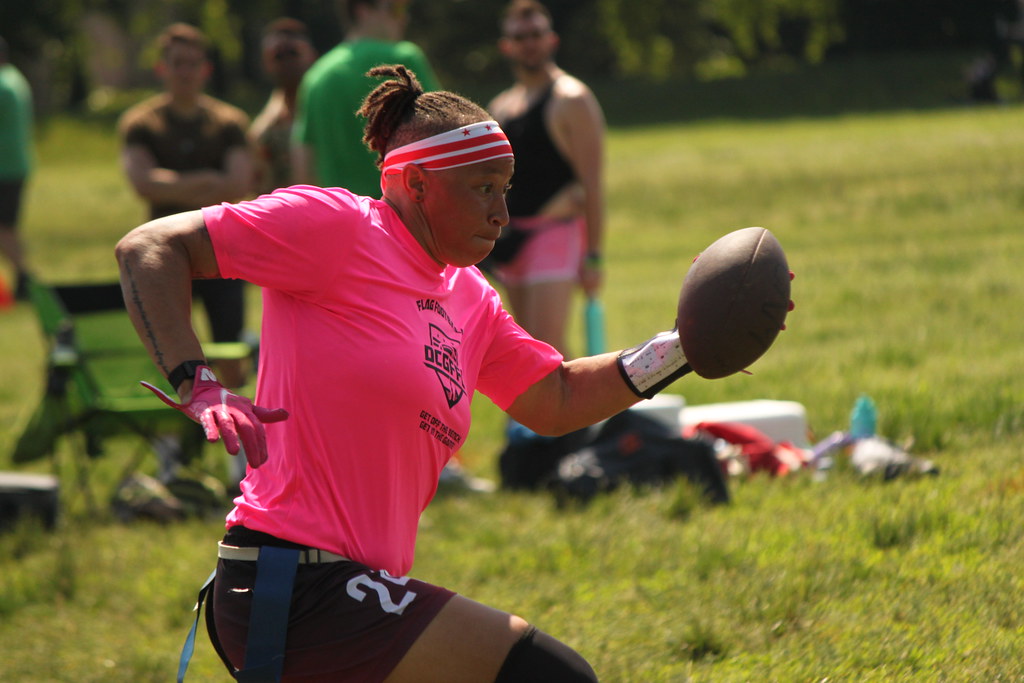 Many of the athletes I shared the practice field with during our shoot played football prior to joining the DCGFFL. Each, though, has followed a unique and circuitous journey that eventually brought them together.

"I've always loved football. Played some in high school, but I dropped the sport because I think, in part, being in the closet and not really feeling comfortable and welcome," said Steslicki. "So this is an opportunity for all of us who have been in a similar situation or who never started, because they didn't feel comfortable, to enjoy the game. Because there's something intrinsic about the game that's so fun. So exciting. And we can play too, right? And we're pretty damn good."

JC Adams story brought him to West Potomac Park where he discovered a whole new existence.

"When I first moved to D.C., I actually had no gay friends, coming out of college. I didn't come out until after; moved to D.C. Joined the league. That's how I met all of my friends here," said Adams.

I asked him to dispel any notions of what an outsider might think of a gay football club.

"I also had a stereotype. I was like, 'Wow. Gay flag football team. I don't know what I'm going to expect.' I joined. And these are - I kid you not - some of the best athletes I've been around," said Adams.

The DCGFFL travel teams play in three tournaments a year, on both the men's and women's side.

"It's a real family environment. We're competitive. But we have a lot of fun out there," said Lindsey Walton, who is captain of the Washington Senators traveling team.

The Senators are defending division champions and winners of the prestigious Pride Bowl in 2018.

Walton stresses that no one interested in joining the DCGFFL has to prove any credentials as an LGBTQ+ individual.

"We have a couple of straight girls on our team. One of them just got married last year. A lot of us have kids. We bring the kids to practice. They're on the sidelines. Some of them are old enough to start yelling at us like, 'you're supposed to catch that.' It's great!" said Walton.

Find out more about the DCGFFL HERE.