Recap: DMV gets its first dose of winter weather 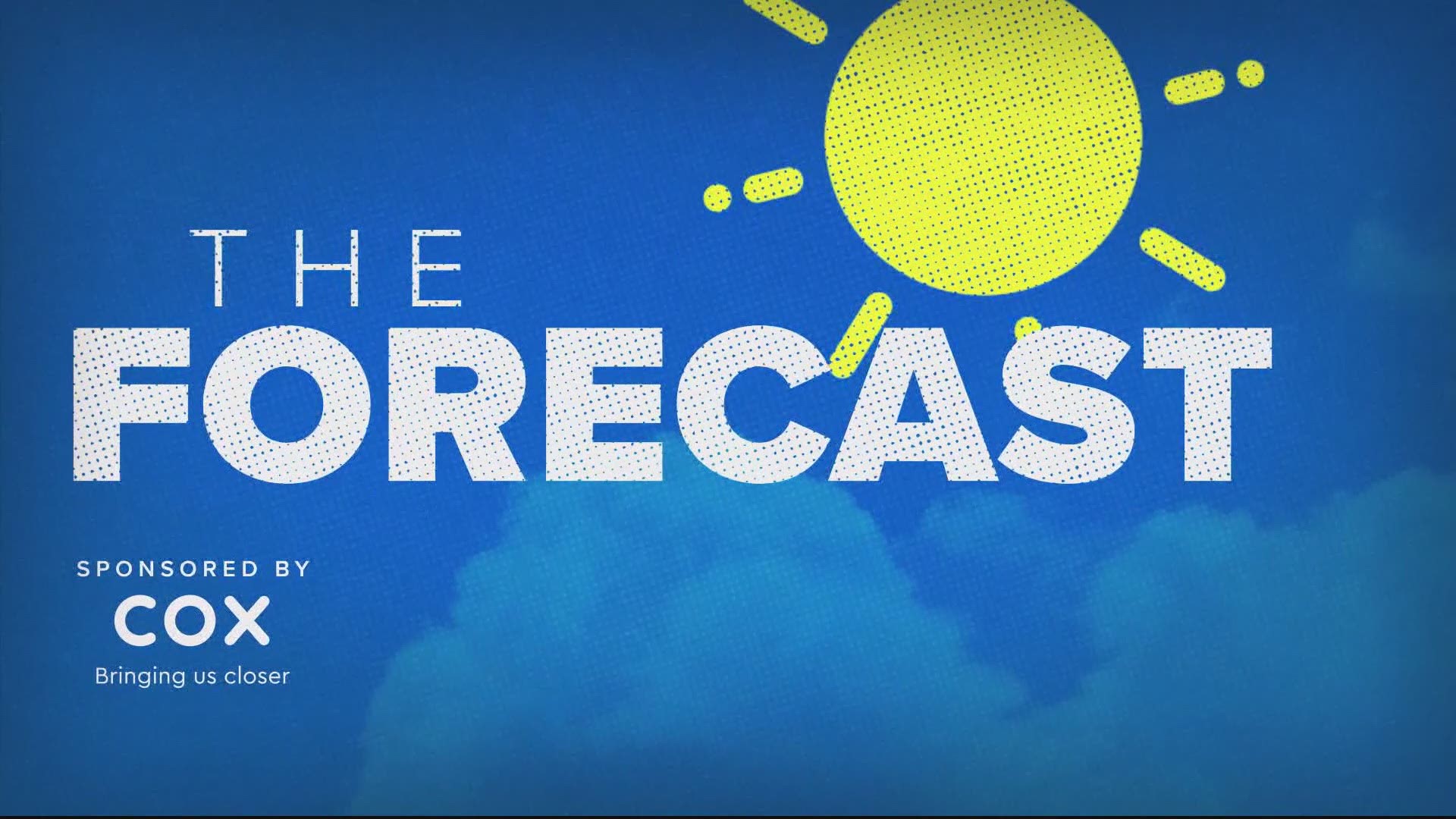 WASHINGTON — D.C., Maryland and Virginia saw one of the larger winter storms in several years on Wednesday. The storm brought, snow, ice, rain and sleet all across the DMV. Actual snowfall varied, though, with areas like Loudoun County, Virginia, and Frederick County, Maryland, saw over half a foot of snow, while other areas like D.C. proper and communities east of the Nation's Capital only saw a dusting.

The mood Wednesday was largely celebratory, with people excited to see the snowfall during the holiday season, but conditions turned dangerous on Thursday after the storm moved though.

Here's a look at how the storm developed:

8:25 a.m. - Anne Arundel County Fire & EMS are on the scene at Baltimore-Washington Thurgood Marshall Airport after a plane skidded off the runway after landing.

Stay at home if you can, please. This is a look at a pretty bad crash on I-95 SB at MM 166. This looks horrible. ⁦@wusa9⁩ pic.twitter.com/DYYE1J5IdC

7 a.m. - Clean up is beginning around parts of the DMV

6:45 a.m. - Snow wasn't the only thing that this winter storm brought - half of the DMV saw a ton of rain, too. Prince George's County is under an Aerial Flood Warning until 12:45 p.m.

6:30 a.m. - Traffic is moving mildly slow out there this morning due to the slick conditions - take it easy and drive a few mph under what that speed limit says

6:15 a.m. - The Jackknifed tractor trailer on eastbound Route 50 at Enterprise Road has been cleared - lanes are no longer blocked.

4:47 a.m. - Winchester, Virginia saw some of the most snow on Wednesday, and it's seeing some of the iciest conditions Thursday morning.

4:45 a.m. Give yourself extra time if you are heading out on the roads Thursday morning - it's icy out there: If you don't have to head outside, don't. 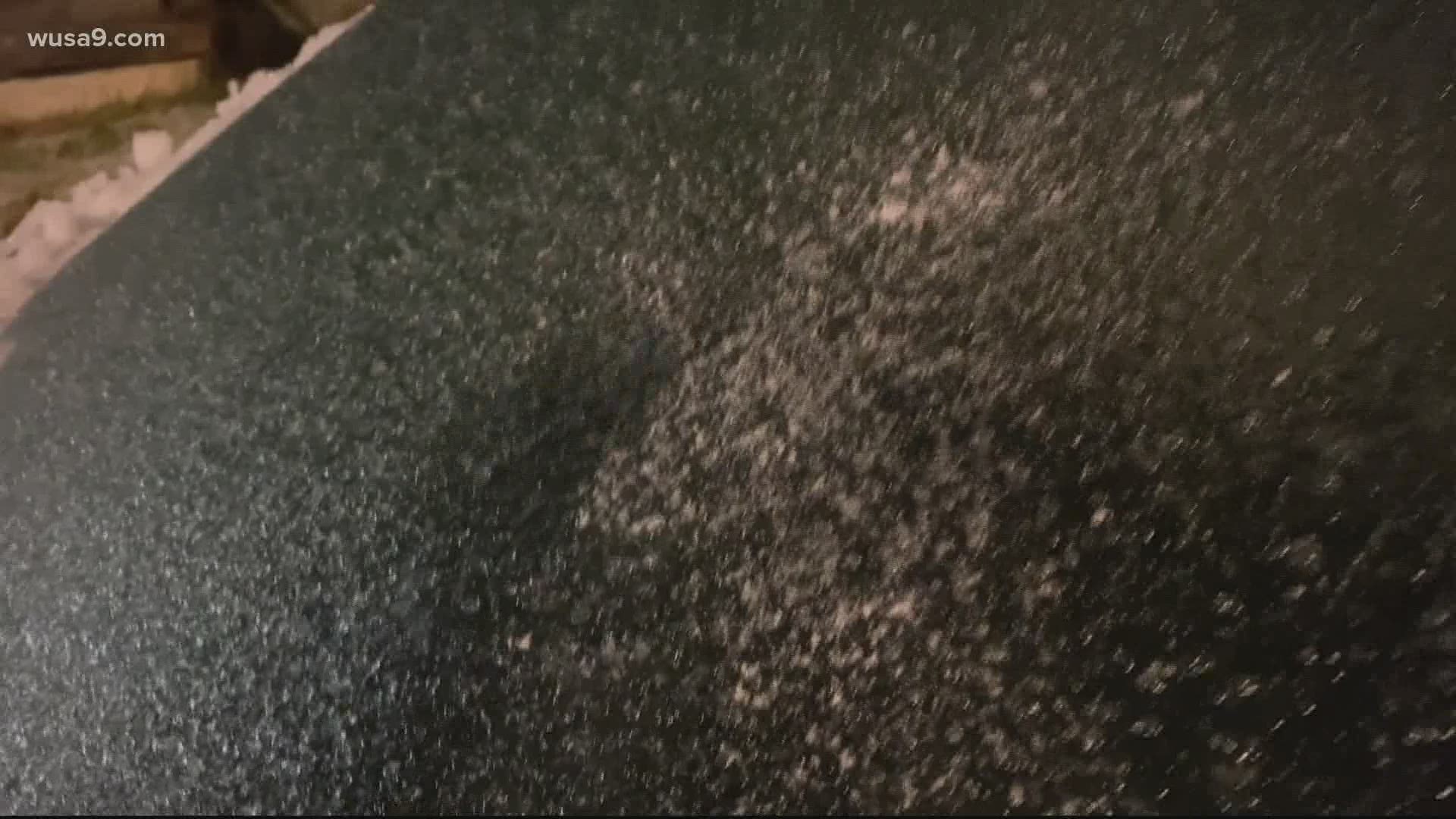 4:22 a.m. - Coatings of ice can be seen all around the DMV, making conditions slippery.

9:55 p.m. Federal agencies in the DC area will OPEN with a delay. Employees should report to the office no later than 10:00 AM. Agencies have the option of allowing unscheduled leave/telework. Visit the link for more details http://www.opm.gov/status

9:15 p.m. A Flood Watch has been issued in Montgomery County, Maryland, until 7 a.m. on Thursday according to Pete Piringer, a public information officer for the county's Fire and EMS service. Snow can still cause huge flooding issues for communities, so be careful.

Flood WATCH in effect til 7a (12/17) Heavy rainfall across watch area will result in rainfall totals of 1-2 inches. When coupled w/ already saturated conditions, blocked storm drains this may lead to isolated instances of localized flooding, especially in flood prone locations. https://t.co/mQDLWTIepa pic.twitter.com/xjRJateu1E

8:01 p.m. Cars are sliding off the roads on some northern Virginia roads, and snowfalls in some communities are well over half a foot deep on the ground.

Just made it to Winchester, Va where @TenaciousTopper says they’ve got six to seven inches of snow on the ground #WUSA9Weather pic.twitter.com/tS7YxlikIM

7:15 p.m. Virtual learning for all Montgomery County Public Schools students will take place as scheduled Thursday, Dec. 17, 2020. Operations at MCPS schools and offices will also begin on time and in-person work and activities will proceed as scheduled, according to a tweet.

6:40 p.m. A wintry mix in northern Virginia has turned into heavy rain bands that could lead to very icy conditions for communities in that area. 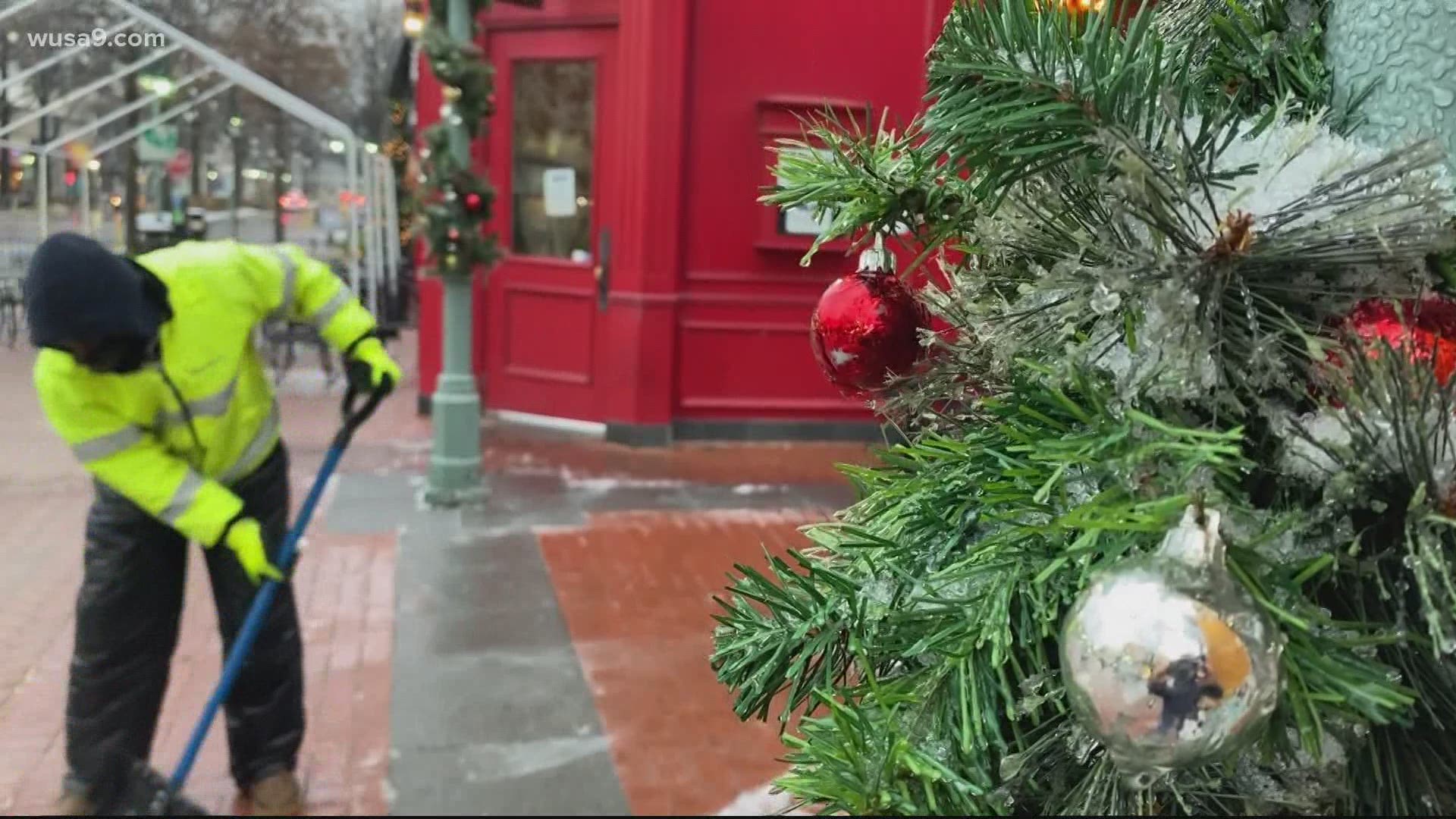 6:15 p.m. Due to the forecast of freezing conditions overnight, and icy conditions in some areas of the county until late morning, all Prince William County Public Schools and Offices will be closed Code Red on December 17, 2020.

Due to forecast of freezing conditions overnight, and icy conditions in some areas of the county until late morning, all Prince William County Public Schools and Offices will be closed Code Red on December 17, 2020.

Schools and offices are closed.
Virtual classes are canceled.

6:05 p.m. All Fauquier County Public Schools buildings and administrative offices will be closed on Thursday, December 17. A decision about facilities for Friday will be made Thursday evening, according to a release on Twitter.

6 p.m. Below is a picture of a Virginia State Police vehicle with damage on the snowy highway of Route 7 in Leesburg, Virginia.

5:45 p.m. WUSA9 speaks to a truck driver in the DMV region who is delivering ice cream on a snowy, icy day. He shares how he is staying safe amid rough road conditions. 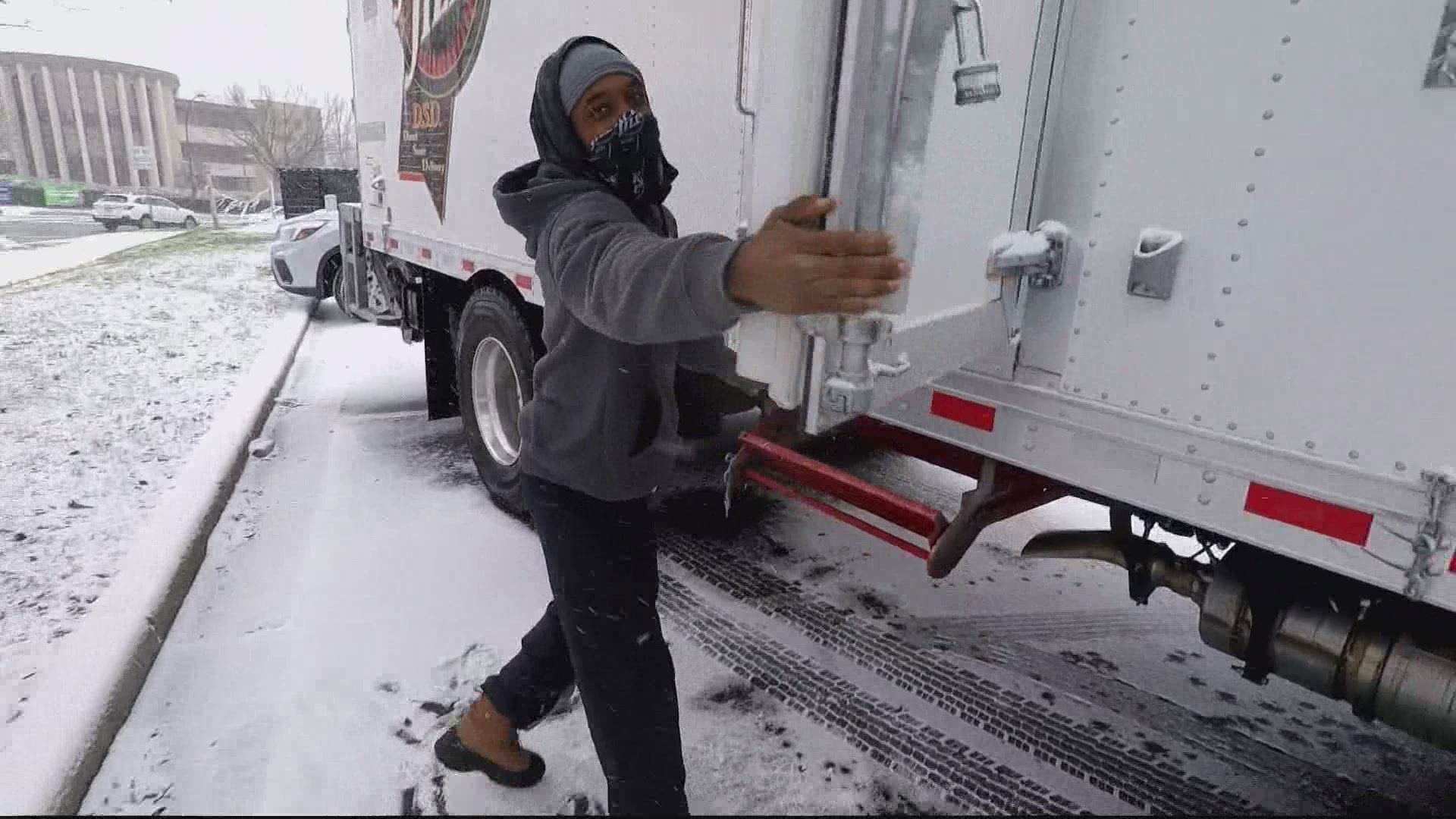 5:06 p.m. Culpeper County Public Schools has closed down all learning for Thursday and will close all office buildings due to the impacts of winter weather in its community, according to a Twitter post from the school district.

4:55 p.m. Video shows construction trucks in Leesburg are moving huge chunks of ice and snow that are built up in the area after heavy snow hit parts of Northern Virginia on Wednesday. 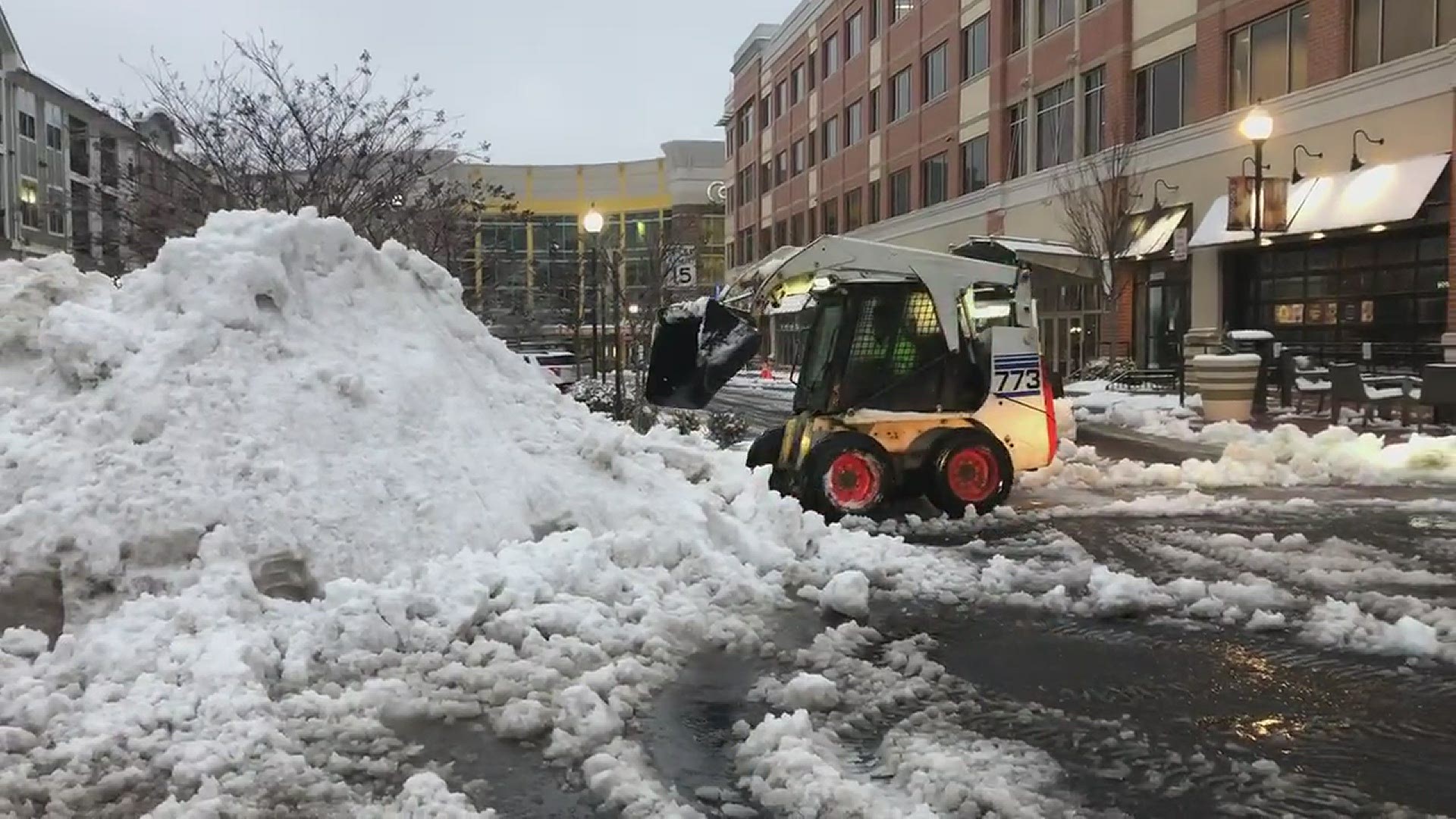 4:15 p.m. Holly Grey is a school bus driver in Loudoun County who loves a snow day. To help clear out her stairs and the sidewalk, she uses a leaf blower!

How’s this for creativity? Holly Grey is a school bus driver who loves a snow day. To help clear out her stairs and the sidewalk, she uses a leaf blower. Because, why not?? @wusa9 #WUSA9Weather pic.twitter.com/gqfBqsbhlE

4:02 p.m. VSP has responded to approximately 200 crashes & 125 disabled/stuck vehicles along I-81 and across Northern Virginia.

#VSP has responded to approx 200 crashes & 125 disabled/stuck vehicles along I-81 & across #NOVA as the #winterstorm moves across #Virginia. Plz #SlowDown #BuckleUp & be prepared for roads to ❄️over as 🌡️drops. Photo: @VaDOTNOVA & VSP assisting @MDSP on I495 American Legion Br. pic.twitter.com/mDML8usDvL

3:55 p.m. As of 4 p.m. the Maryland State Police Department said on Twitter has responded to 489 calls for service, including 161 crashes and 60 unattended/disabled vehicles.

3:15 p.m. Massive traffic jam is being seen on I-70 near Mt. Phillip Road near Frederick County after a vehicle accident in the area.

3 p.m. Before and after photos in Laytonsville, Maryland

Credit: Alan Fischer
The difference between 10 a.m. and 2 p.m. in Montgomery County.

The snow came and went, and now the rain is here to turn it all to slush @wusa9 #WUSA9Weather pic.twitter.com/SICyK1ofmR

2:43 p.m. The Loudoun County Sherriff's office is reporting at least 80 crashes today, but no major accidents yet.

UPDATE from @LoudounSheriff as conditions turn icy:
-Deputies responded to 80 weather-related crashes
-About 40 disabled vehicles because of weather
-Nothing major so far

2:40 p.m. The "pets enjoying snow" photos are rolling in! Keep sharing, because we love to see them!

Tenley could care less about her first snow. All she wants is the stick. pic.twitter.com/UqdDSkSQ3U

2:30 p.m. Round Hill, Virginia has around 5 inches of snow on the ground with sleet now beginning in the area.

2:25 p.m. Metrobus says it will begin operating a modified service plan as of 3 p.m. due to deteriorating road conditions. See full schedule here.

2 p.m.: Heavy snow is still coming down in Winchester, Virginia after several hours. One neighbor said she had already shoveled once and her driveway was covered again.

1:51 p.m. A Brazilian family new to the area is experiencing snow for the first time!

Imagine today being the first day you ever see snow?! This family from Brazil just moved to the DMV six months ago. “It’s Christmas magic,” the father tells me. @wusa9 #WUSA9Weather pic.twitter.com/azkE51jpRC

1:48 p.m.: Even a show day couldn't keep these two cousins from their regular coffee date to support local businesses through the pandemic.

Credit: Ariane Datil
Crystal (left) said she has been making it a point to support local businesses during the pandemic and a snow day is no exception!

1:28 p.m. Kids are breaking out the sleds in Frederick, Maryland!

1:15 p.m.: Heavy huge flakes in Round Hill and Herndon, with streets and cars well covered with snow.

12:40 p.m. Salt is being distributed on roads in Fredericksburg, Virginia as snow starts to accumulate.

Finally made it to Leesburg where it has become a winter wonderland. @wusa9 #WUSA9Weather pic.twitter.com/8EswuQIWIr

12:06 p.m. Downtown, D.C. and the National Mall are covered with a picturesque dusting.

See what the snowstorm looks like all across the DMV below.

PHOTOS: First snowfall of 2020 hits the DMV, and it's magical

10:45 a.m. Snow is starting to stick in places like Reston, Virginia and Germantown, Maryland. 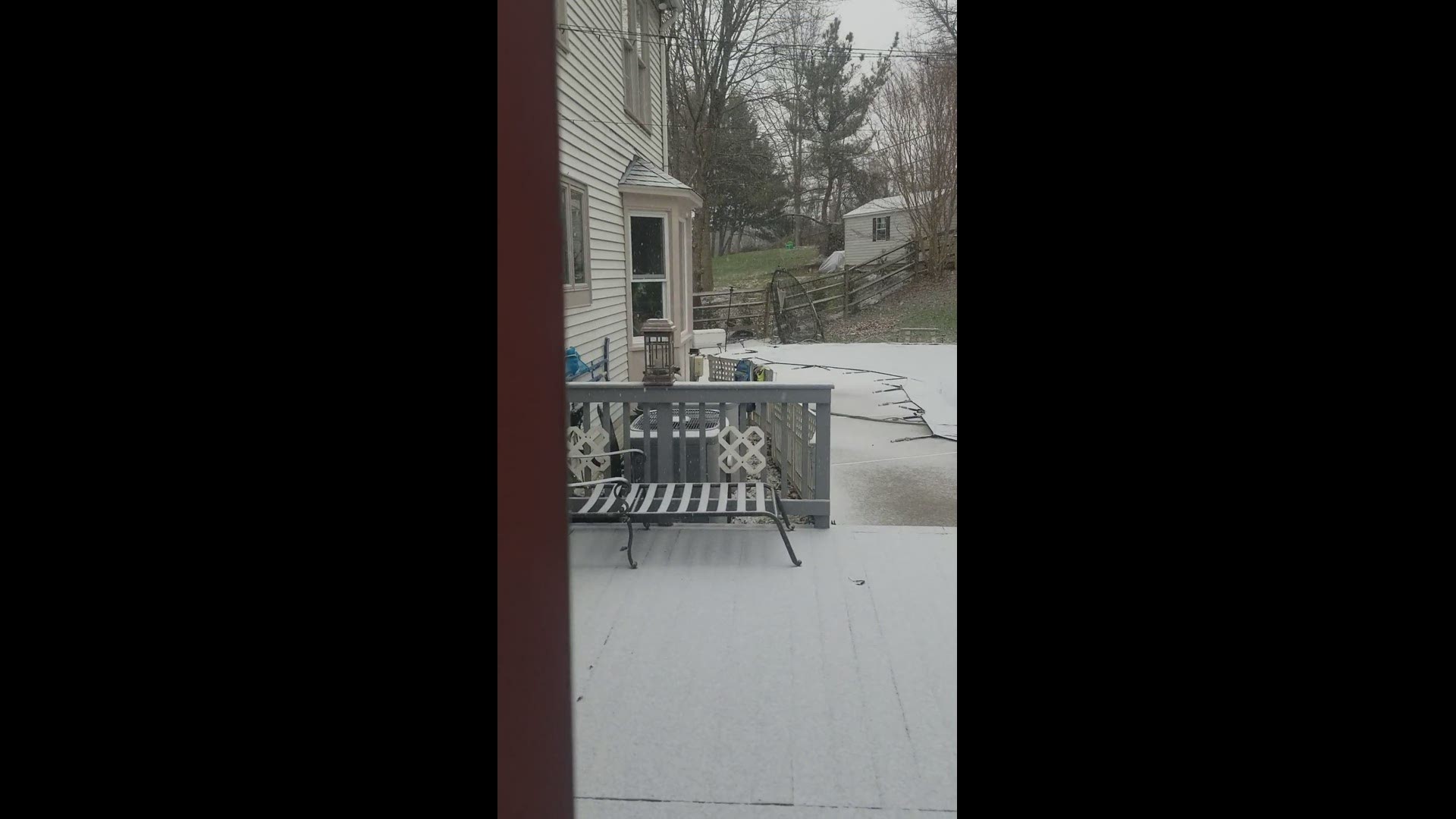 11:10 a.m. Driving conditions were worsening by late morning, but road crews were out in force.

As we travel to Leesburg on Interstate 267, expect to come across plenty of salt trucks. Driving conditions are starting to get dicey the further west we go. So far no major accidents near the Ashburn area. @wusa9 #WUSA9Weather pic.twitter.com/vCoFiZJHD6

10:20 a.m. Flurries are starting to fall across Virginia and D.C. 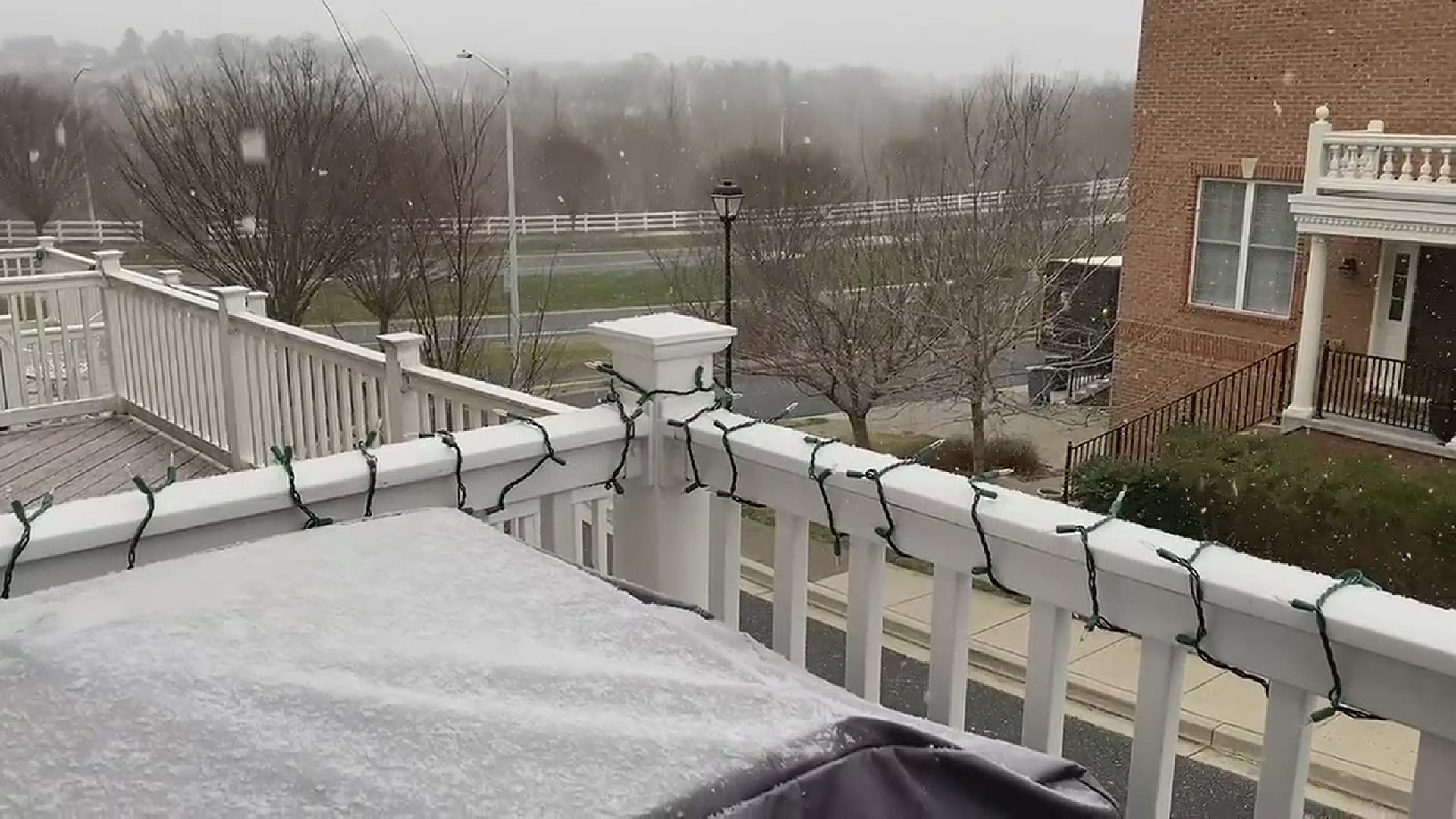 RELATED: Parts of DMV set to get dumping of snow on Wednesday

Here's a timeline of what to look for throughout the day Wednesday and into Thursday morning: The ingredients have come together for rain, snow, and a rain/snow mix across the region as a strong Nor'easter develops.

Along and west of I-81 into the mountains will be mainly snow with a snow to rain mix in the Metro but all rain well south and east of D.C.

An initial burst of snow has enveloped most of the Metro Area.  Between now and 6 p.m. the precipitation becomes heavy quickly but changes to sleet and may mix with rain in the afternoon as far north as Frederick and as far west as Leesburg reducing snowfall amounts.

Secondary roads will become slippery quickly well north and west of DC Wednesday afternoon. Freezing rain is also possible Wednesday afternoon as far west as Winchester and as far north as Frederick. Snow, sleet and rain end around 3 or 4 a.m. Thursday and with temps at below freezing west of I-95 expect some slick spots, including your driveway and sidewalks.

RELATED: TIMELINE: Here's what to expect from Wednesday's snowstorm

Road crews were out early Wednesday in preparation of the winter weather. WUSA9 spoke with the Virginia Department of Transportation who said crews have been preparing for winter weather since the summer, and have new protocols in place to do their jobs safely during the coronavirus pandemic. 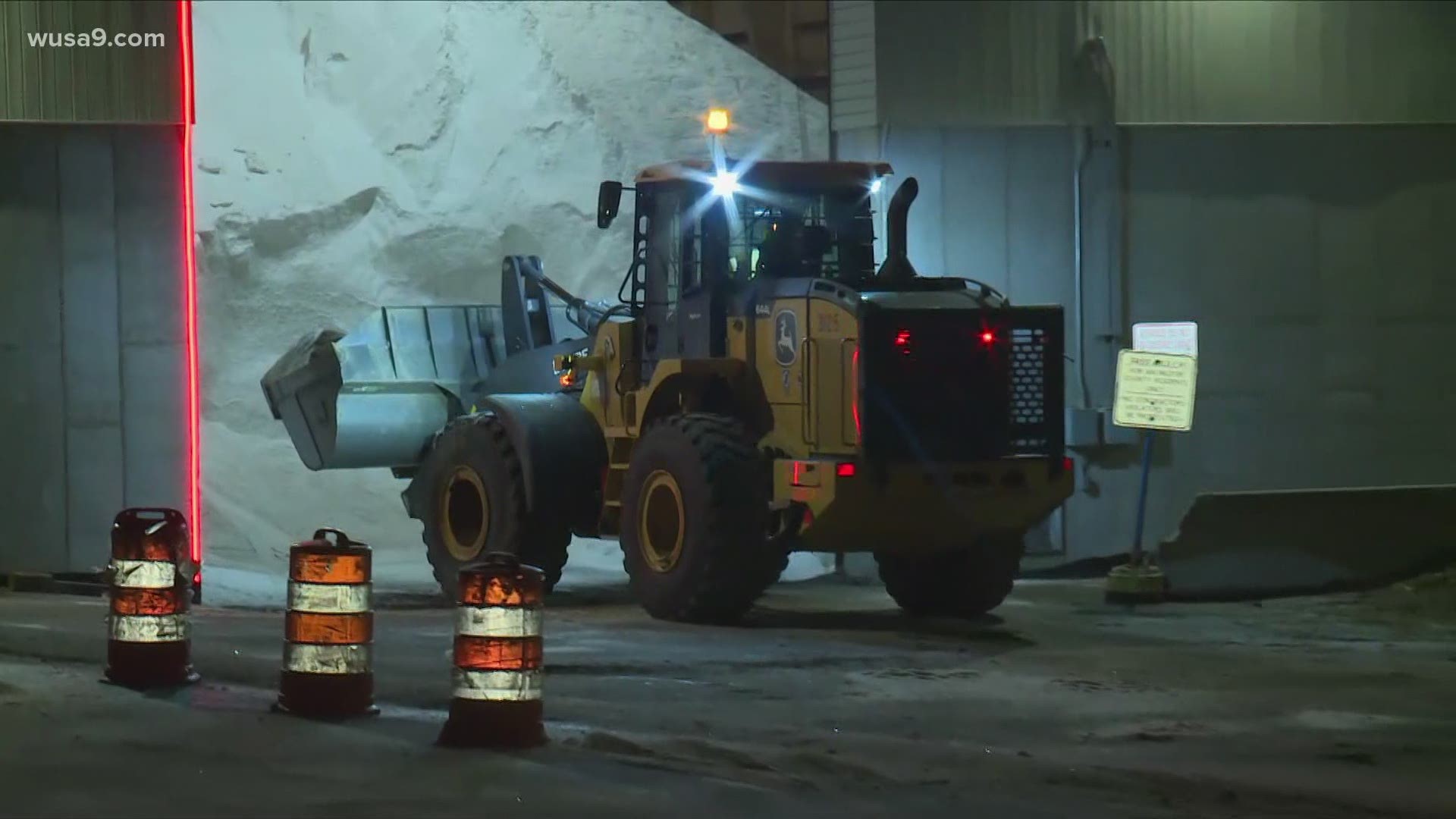 Speaking of the pandemic, the shift to virtual learning has eliminated the possibility of a snow day for some kids, with many schools around the region relying on virtual learning plans rather than canceling classes due to weather. Some schools have canceled classes all together though. Find the latest on school closures here.

RELATED: Snow day or nah? Here's what local school districts are planning on

As the weather continues to impact the region, we want to hear from  you. Send us your photos on social media using the hashtag #WUSA9Weather, or submit your photos and videos to the Near Me section in the WUSA9 app. Here's how it works.

Stay with WUSA9 all day for updates as the weather develops. Now is also a great time to download the WUSA9 mobile app to get alerts to your phone as soon as news breaks.