'On our own, in America' | Prince George's neighbors feel hung out to dry after 'historic' floods

Cheverly neighbor James Hampton said insurance denied his claim, and neither county nor state officials have stepped in to help after Thursday's storm. 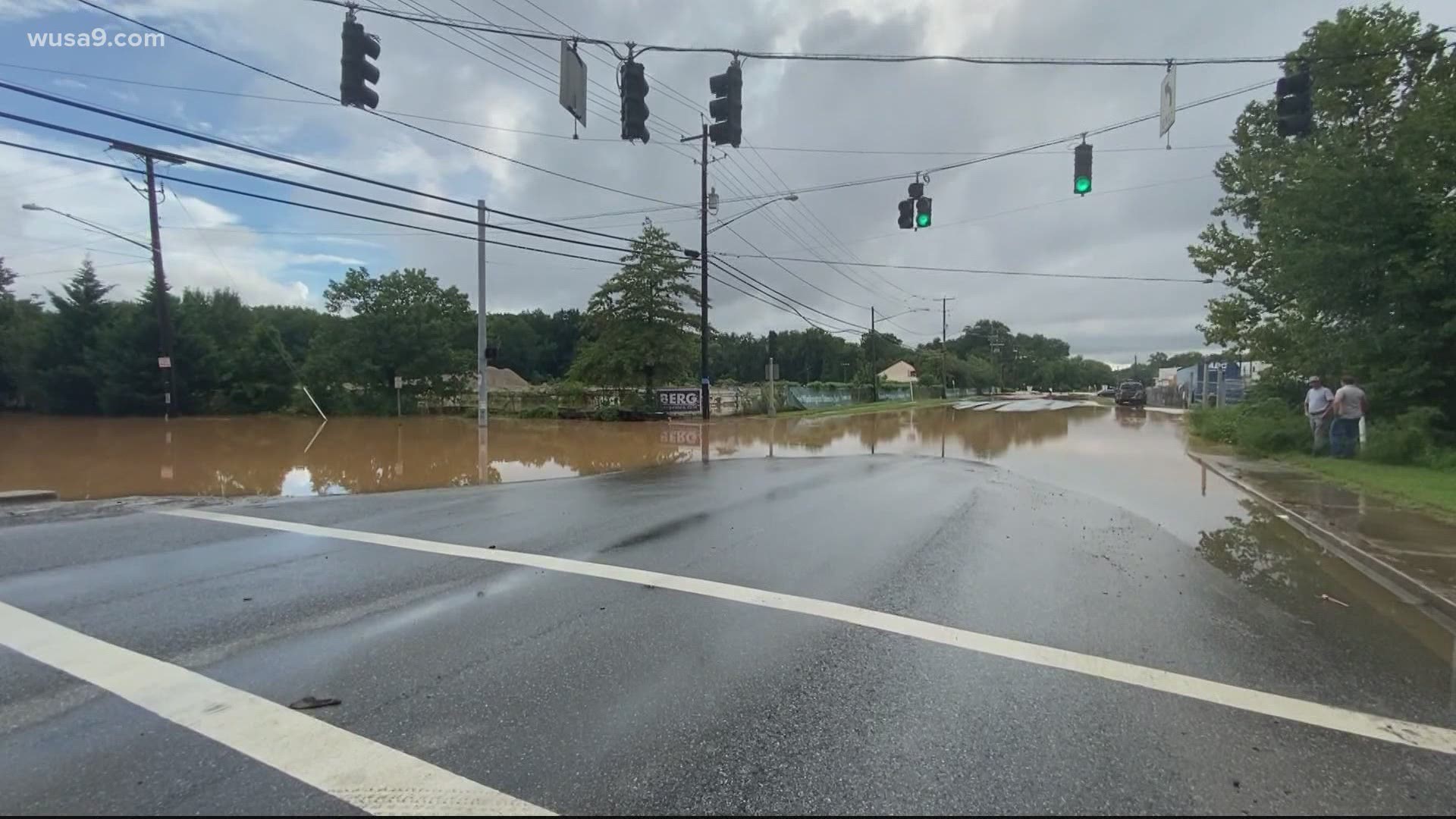 CHEVERLY, Md. — Neighbors in Prince George's County are dealing with the aftermath of what a spokesperson for the county fire department called "historic" and "unprecedented" floods. Some feel like they're doing it on their own.

James Hampton lives in Cheverly and said when the storm rolled in on Sept. 10, it filled his basement with six feet of water.

"When the water came through, it wiped the internet out, the cable, everything out," Hampton said. "Seemed like our whole life just changed in a couple of hours."

He said water was shooting out of their basement tub, toilet and sink. Their freezer -- which his wife had just filled up with food -- was floating in the water.

Hampton said the flood killed his water heater and AC/heat system, so his family has been living without hot water for nearly a week.

Neighbors in @PrinceGeorgesMD are still cleaning up after Thursday's storms.

One family in Cheverly tells me they feel like they're doing it on their own.

Since Thursday, he and his wife have been looking for help, to no avail.

First, they tried insurance, which he said denied his claim. Then, he reached out to his water company, then the sewage company, FEMA, The Red Cross and a Catholic charity, But other than a gift card from The Red Cross, they couldn't get financial help from anyone.

“It’s crazy, absolutely crazy," Hampton said. "And seems like no one wants to help, no one. We on our own, in America.”

After hearing that complaint from multiple constituents, Maryland State Delegate for Prince George's County, Julian Ivey -- who lives in Cheverly -- sent a letter to the governor demanding action.

“We have to make sure we get these flood prevention barriers in place so we can keep things like this from happening again," Del. Ivey said. "And that’s why I’ve been advocating to the governor to step up his effort specifically, calling on him to call on the President of the United States to also provide relief as well.”

Del. Ivey said the county needs to build large barriers to keep the creeks from overflowing into people's homes when it rains.

“This is just one of those moments where as a community we realize that climate change is very real, and we have to address it head-on," he said. "We have to do everything we can to prevent catastrophic things like this from happening again."

"We have been working closely with Prince George's County officials since the day of the flooding, and the county has not identified any need for additional relief at this time."

County Executive Angela Alsobrooks said Thursday that all county systems, including WSSC infrastructure and State Highway infrastructure, are being assessed to see if any mechanical failures led to the flooding.

"This was an extraordinary event for our region," Alsobrooks said. "We received more than 4 inches of rainfall in an hour, which is a 100-year event, and 4.9 inches in two hours, which is a 50-year event. Hyattsville was the epicenter with 6.35 inches of rainfall. While it appears County systems were working properly, they were undoubtedly overwhelmed."

Flooding is not a new issue in Prince George's County, nor across the state, residents and officials say.

The American Society of Civil Engineers rated the state's stormwater infrastructure as a "C" on its 2020 report card, which past president of the Maryland section, Carrie Nicholson, said means "mediocre, requires attention". But, she also said even with that rating, Maryland leads the nation in stormwater-related practices.

Nicholson said the average annual precipitation in Maryland has increased over the last few decades.

"This is concerning, because the aging infrastructure is not capable of containing water from increasingly frequent heavy storms," she wrote in an email. "Incorporating the impacts of climate variations and storm events into the design, operation, maintenance, and expansion of all types of infrastructure in Maryland can improve community resilience – reducing the time and extent that households, businesses, and critical services are affected during and after natural and man-made disruptions."

When asked if the state had any plans to help the county address infrastructure issues, Jay Apperson with the Maryland Department of the Environment sent the following statement:

"The Maryland Department of the Environment ensures critical stormwater infrastructure is maintained and, where necessary, improved to protect people and the environment. Our department issues a stormwater permit to Prince George’s County, and that permit requires the inspection and maintenance of existing stormwater infrastructure as well as improvements for areas that do not have adequate stormwater management. Also in terms of infrastructure, if there are significant or high hazard dams in the area we ensure that they are structurally sound and have up-to-date emergency action plans in place to protect people from harm in the case of a catastrophic failure.

The Maryland Department of the Environment also provides funding for stormwater projects that can help with flooding issues. We provided a $46.5 million Water Quality State Revolving Loan Fund loan and a $1.5 million grant in the form of loan forgiveness from that fund to Prince George’s County for the Urban Stormwater Retrofit Public-Private Partnership project. That project entails the planning, design and construction of an array of structural stormwater treatment options, from small rain gardens to large projects such as stormwater pond retrofits and green streets. The projects are designed to store or treat stormwater runoff to reduce water pollution and improve water quality as required by the county’s stormwater permit and Maryland’s Chesapeake Bay restoration plan, and they are also designed to reduce flooding."

Apperson said the funding was approved by the Board of Public Works in 2017.

A spokesperson for Prince George's County Department of Public Works told WUSA 9 that they are upgrading infrastructure as needed but do not currently have plans to fix anything specific in Cheverly post-flooding.

“I feel let down. I really do," Hampton said.

He thought his family had enough on their plate. He and his wife are both essential workers (he works for Metro), and they have two kids -- ages 13 and nine -- who are both doing school virtually. Hampton said they've sent them to a relative's to work for the past week.

“The whole storm system should be upgraded, because there ain’t no way someone’s house should have took on that much water," he said.