Route-50 was closed in both directions for approximately 4 hours due to flash flooding. 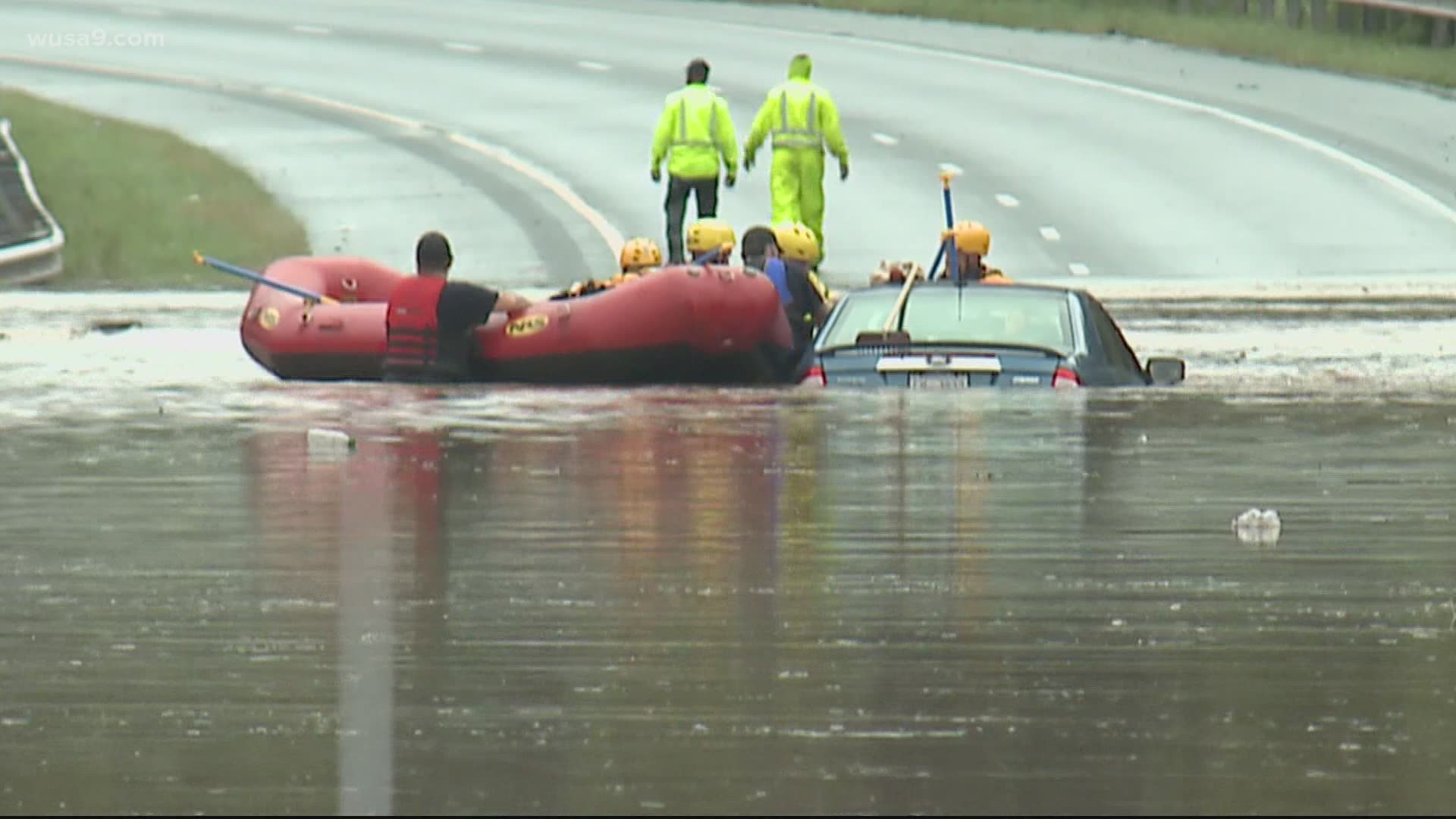 CHEVERLY, Md. — As if rush hour traffic in the DMV wasn't bad enough, Thursday evening commuters were left to deal with some of the worst flash flooding Prince George's County has ever seen.

One of the region's busiest highways, Route 50, was backed up for several hours after water rose three to four feet in a matter of minutes. Traffic was blocked in both directions for nearly four hours, as crews worked to rescue trapped drivers using inflatable rafts.

According to Jennifer Donelan, director of public information for the county's fire and EMS department (PGFD), the rescue teams received 250 calls for help-- 134 for water-related emergencies -- in about 4.5 hours. In a typical 24-hour period, they'll receive 430 calls.

Let's break that math down. Average it out and PGFD did 12 hours worth of work in 4 hours and 30 minutes.

Donelan described the flooding as "historic" and "unprecedented," noting that fire crews spotted flooding in places that have stayed dry in the past.

Chris Milton was inside the Donohoe Construction Building in Cheverly when the waters began their rapid rise. He said in 15 minutes, water reached his waist. Milton said he's never seen anything like it.

"Don't want to see it again either," Milton said.

Another employee in the area, David Robinson, said he thinks it is the third time the area has flooded.

"It happens when we get torrential downpours," he said pointing toward Beaverdam Creek. "It overflows the riverbank that they have set up. It's been high, but not this high before."

Prince George's County was not the only area in the DMV to be heavily hit by flash floods. Pete Piringer, the Chief Spokesperson for Montgomery County Fire and Rescue, reported roughly 150 calls for service Thursday afternoon, with more than two dozen of them for water rescues or vehicles in floodwaters. The flooding was heavily concentrated in Bethesda, Chevy Chase, Kensington, Aspen Hill and Takoma Park.

Route 29 between Lockwood Drive and Crestmoor Drive is remaining closed until Friday morning after the flooding caused water to flow over Burnt Mills Dam, covering it completely.

Update - Beach Drive near Garrett Park Road, @mcfrs swift water rescue boats checking several vehicles in area & doing a wide area search, at this point it appears as though the vehicles are on occupied but they’re partially submerged and in somewhat remote area https://t.co/pTi8TCxVpx pic.twitter.com/UHeLhRR53V

An Areal Flood Warning is in place for D.C., Montgomery and Prince George's counties until 2 a.m.