GasBuddy: 55% of DC gas stations are still out of gas 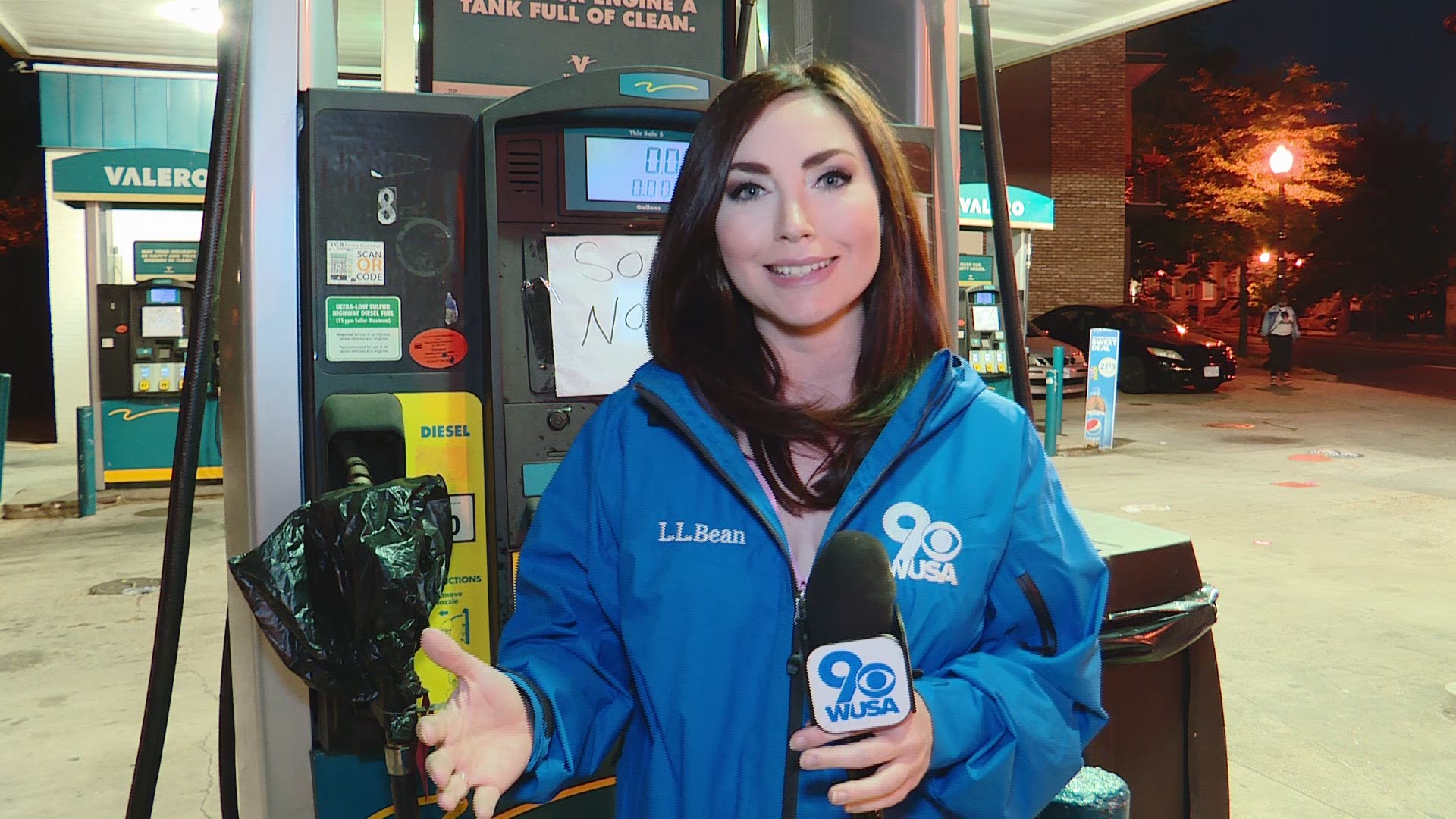 VIRGINIA, USA — The DMV was hit particularly hard by the ongoing gas shortage concerns, following a cyberattack on the Colonial Pipeline. However, gas availability is increasing in both Virginia and Maryland, while the District continues to struggle to refuel. New data released by GasBuddy Monday night showed that more than half of D.C.'s gas stations were still out of gas.

“I work in Leesburg so it happened right before the weekend, which was okay, but now I’m just like how am I going to get to work,” a frustrated gas seeker named Ebony said Sunday after days of searching for fuel. “I might have to call off. There’s nothing I can do. I don’t want to get stuck in Leesburg. There’s no gas there either.”

Patrick De Haan, a senior petroleum analyst at GasBuddy, is tracking outages up and down the East Coast. Virginia has 14% of stations reporting gas shortages and Maryland is down to only 11% of stations saying they are out of gas. Those numbers are down from 53 and 42%, respectively, in the days immediately following the cyberattack.

While 55% of D.C. stations are still out of gas, this reflects a significant decrease from last week's numbers, which peaked at 91%. According to De Haan, one of the reasons D.C. was disproportionately hit was the small number of stations in the District relative to the population. De Haan said there are 113 stations for 693,000 D.C. residents to choose from -- or one station for every 6,132 residents.

“My tank is empty and I tried to get some gas and now I’m going to five different gas stations and there’s no gas,” another gas seeker, Mary, said ahead of her out-of-town trip to pick up her daughter from college Monday.

RELATED: Where are the gas shortages across the DMV area?

North Carolina, Georgia and South Carolina have also been significantly affected with 25%, 27% and 28% of stations reporting no gas, respectively, Monday night.

The Colonial Pipeline, which runs from Texas through Virginia and Maryland to New Jersey, delivers roughly 45% of the fuel consumed on the U.S. East Coast. The company restarted the entire pipeline system May 13.

"Product delivery has commenced to all markets we serve," Colonial Pipeline tweeted.

RELATED: Colonial Pipeline restarts operations, warns it will be days to return to normal

Gov. Ralph Northam declared a state of emergency in Virginia on May 11 to address gasoline supply disruptions throughout the Commonwealth.

“This emergency declaration will help the Commonwealth prepare for any potential supply shortages and ensure Virginia motorists have access to fuel as we respond to this evolving situation,” Northam said in a release.

Gov. Larry Hogan authorized the Maryland Department of Transportation (MDOT) to "take emergency measures" to respond to the fuel crisis.

"It is important for Marylanders to know that the supply chain is still working—albeit more slowly than usual—and there is no need for panic buying," Hogan said. "While the operators of the pipeline anticipate that the disruption is likely to be short-term, we continue to prepare for all contingencies as part of our statewide response.”

Where is gas available in my area?

Anyone who needs to get gas can use this Gas Buddy Tracker to find out where any shortages are. Just search for your zip code, and it will list which stations have fuel.

According to AAA, the average cost per gallon for regular unleaded gasoline Tuesday was $2.87. They say the national average was $2.98.

How can I prepare to save my gas?

Here are a few tips to how you can preserve your gas to reduce going on a quest to fill up your tank: 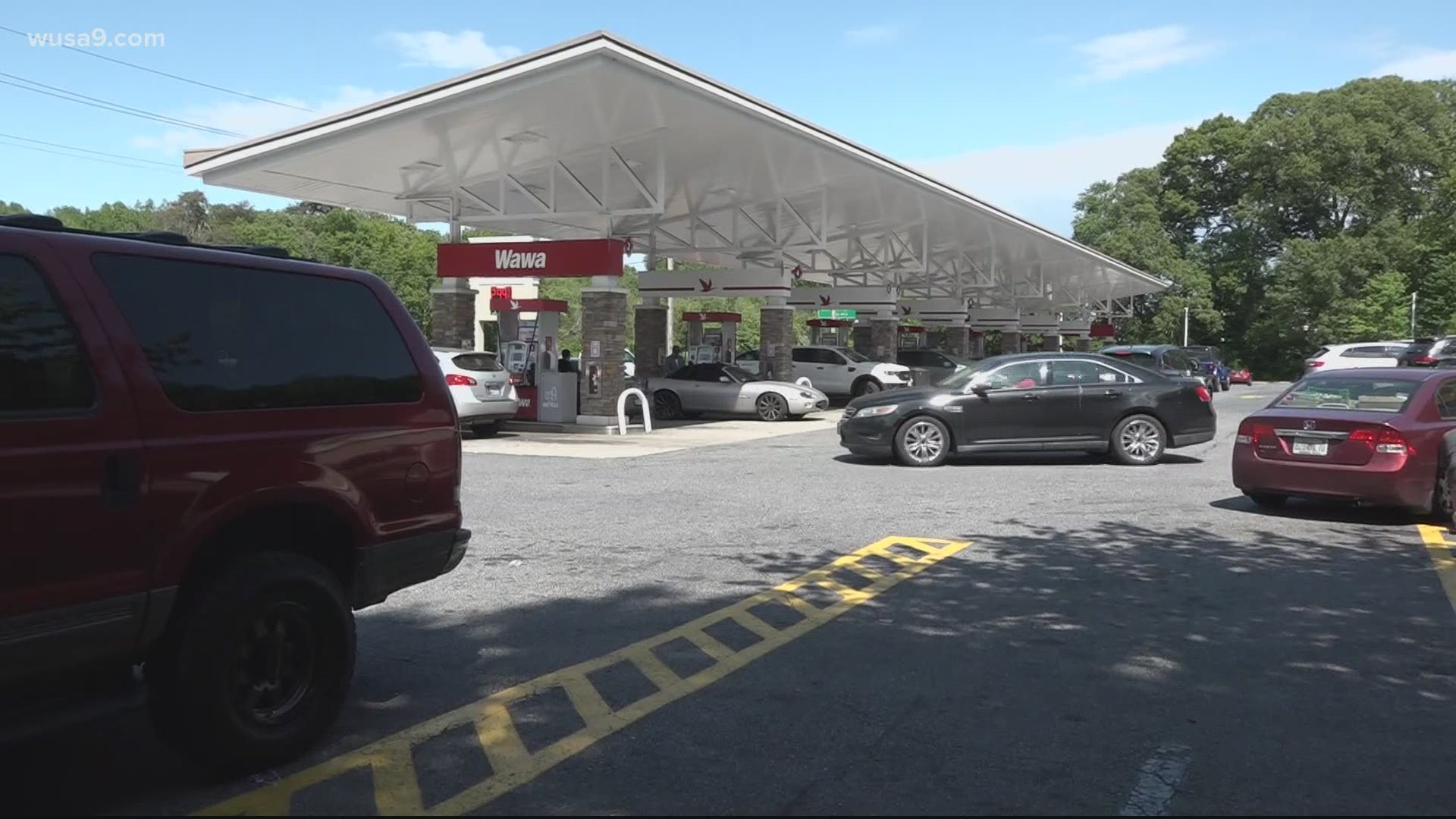 300% increase in roadside rescue calls for drivers running out of gas, AAA says