An expert with AAA advises drivers not to panic buy, or shortages and price increases will only worsen. 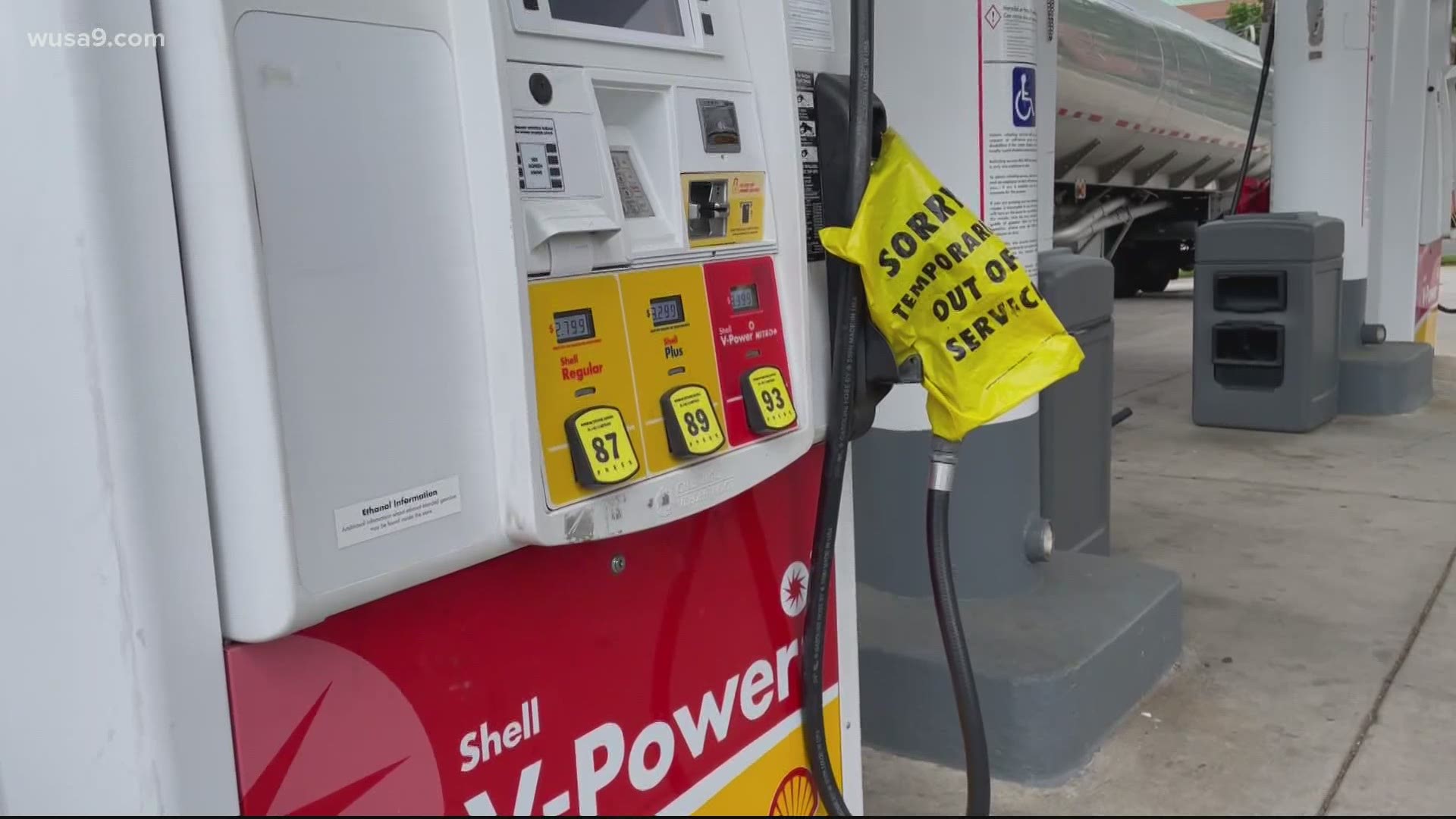 ALEXANDRIA, Va. — An Alexandria gas station ran out of fuel for a day after the Colonial Pipeline hack. Experts worry that could worsen if the pipeline isn't fixed by week's end.

After a Shell station in Alexandria ran out of regular gas Monday and then premium gas Tuesday morning, a tanker came to its rescue Tuesday evening, replenishing the pumps.

The station's manager, however, is worried that everyone rushing to the pumps will quickly drain this new supply.

“The thing is that people when they know there is like a shortage, you know, they all run to get gas because they probably need the car later," manager Carlos Gonzalez said. "So that has put us in a bad situation right now.”

“With each passing day, the situation becomes more critical," Townsend said.
"And you could see major price spikes by the end of the week, if this pipeline is not put back on line …. So the most important thing for consumers to do is to not engage in panic buying and topping off their gas tanks, because that will make a bad situation even worse.”

RELATED: 'Our biggest concern is having the product' | Fuel companies scramble for gas as Colonial Pipeline outage leads to price surge

#UPDATE: A tanker is here NOW filling up the pumps at this gas station in Alexandria.

The manager said they should be operational in 20 minutes. He hopes it lasts... @wusa9 pic.twitter.com/IPFJs0gx7r

Driver Kristale Grant Francois said she hadn't realized the impact the pipeline shutdown would have on her fuel tank and wallet until she saw out of order signs at the Shell station.

“I’m definitely concerned," she said. "But that’s why now I was originally going to get $10 you see, but I’m filling, I filled it up.”

Tuesday, Virginia Governor Ralph Northam declared a state of emergency because of the shutdown, saying that the pipeline provides the primary source of fuel to many stations in Virginia.

Townsend said it also provides 45% of the East Coast's fuel. He said it funnels through 14 states and six major airports.

The EPA also issued a waiver Tuesday to D.C., Maryland, Virginia, and Pennsylvania to help them keep the tanks filled. Townsend said typically, gas stations have to change over to a summer gas blend to help with pollution, but the waiver will let them use the winter blend in the coiffeurs.

Even before the shutdown, Townsend said some roadways in the Washington Metropolitan area have already been seeing pre-pandemic levels of traffic, which means more cars needing fuel.

“Considering the fact that I’m a senior citizen on a fixed income, yeah," Sams said.

Townsend said this hack and resulting shutdown shows the fragility of our the United States' infrastructure, and he hopes leaders take action.

“They have to be more vigilant. You have to understand that there are bad actors out there ," he said. "And they want to cripple the United States. And one way you do it, is by crippling the pipeline, because we are a country of automobiles.”

Townsend emphasized how important it is for drivers not to go out and panic buy -- that will only worsen the situation.