During this heated election season, Arlington Democrats and the Fairfax GOP both said on Saturday that many political signs have been destroyed or vandalized. 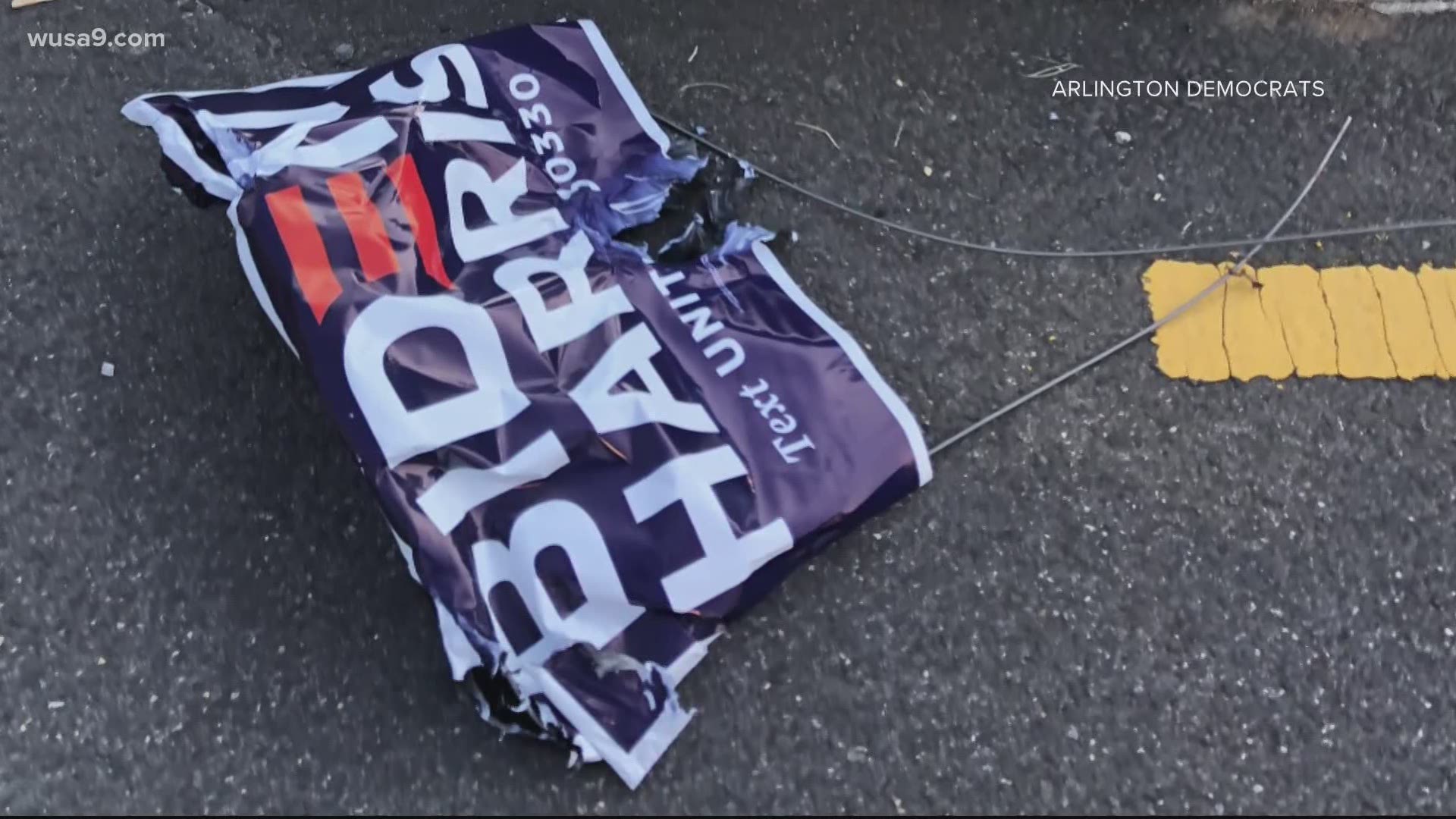 ARLINGTON, Va. — Arlington Democrats told WUSA 9 on Saturday that around 1,500 campaign signs have been destroyed or vandalized this election season, a number that members said was far higher than other presidential election years.

Carol Burnett, who serves as program chair for the group, has helped put up signs promoting the party's candidates and issues for the last several months.

She even knows the number of medians in Arlington that members can put signs along: 379.

However, this election season has stood out for unfortunate reasons as destruction and vandalism have spiked.

"There is not a single route that has not had some damage," she said on Saturday. "I would say this is unprecedented for Arlington. This goes beyond the normal sort of loss of signs by teenage kids and the wind.”

Burnett told WUSA 9 that some signs have been cut with a knife or painted with graffiti, while at least one resident found a campaign sign on fire in her front yard.

Recently, she saw some of the damage firsthand after putting out new sets of signs along Wilson Boulevard.

"I put them up on a Tuesday afternoon and on Wednesday afternoon, 24 hours after, I went by and every single sign had been removed or cut," she said.

The destruction and vandalism has mainly targeted signs for Joe Biden and Kamala Harris.

Due to the high demand from supporters as well as the damage reported, Arlington Democrats are now out of signs for the 2020 presidential ticket.

For Burnett, seeing the destruction in the community brought concerns over the anger people were expressing.

"It’s not something you can do by hand. You needed a tool to cut these. These are people’s individual homes that have been trespassed on," she said. "To slash with a knife is not just pulling it out of the ground. That's really violent.”

The damage to campaign signs has also been experienced in other areas of the region.

The Fairfax GOP told WUSA 9 on Saturday that some signs supporting President Donald Trump have been taken from people's yards.

"We have had signs burned right in front of someone’s front yard. Stolen is one of the biggest things we’re running into as well," said party chairman Steve Knotts. "I have never ever seen anything like this.”

Other Republican groups in Virginia and Maryland echoed seeing the damage Knotts described.

When asked what they believed to be the cause of the anger during this election season, Knotts and Burnett had different answers.

"Personally, I feel that this is because we have a president who has emboldened people to behave this way," Burnett said. "This is not a way that people used to behave.”

"A lot of this, to me, comes from social media," Knotts responded. "People are able to be vile towards another human being without having to personally say that to someone’s face.”

However, moving forward, Knotts and Burnett both hoped people would focus more on voting and not on vandalism with Election Day getting closer.

"Looking past the election, my hope is that we can have that dialogue with other people and that we can talk to people that disagree with us," Knotts said.

RELATED: The Barbie Pond on Avenue Q Gets Political | Most DC Thing