As deadly wildfires engulf states on the West Coast, crews from the DC region have traveled to assist in the fight to stop the spread of flames. 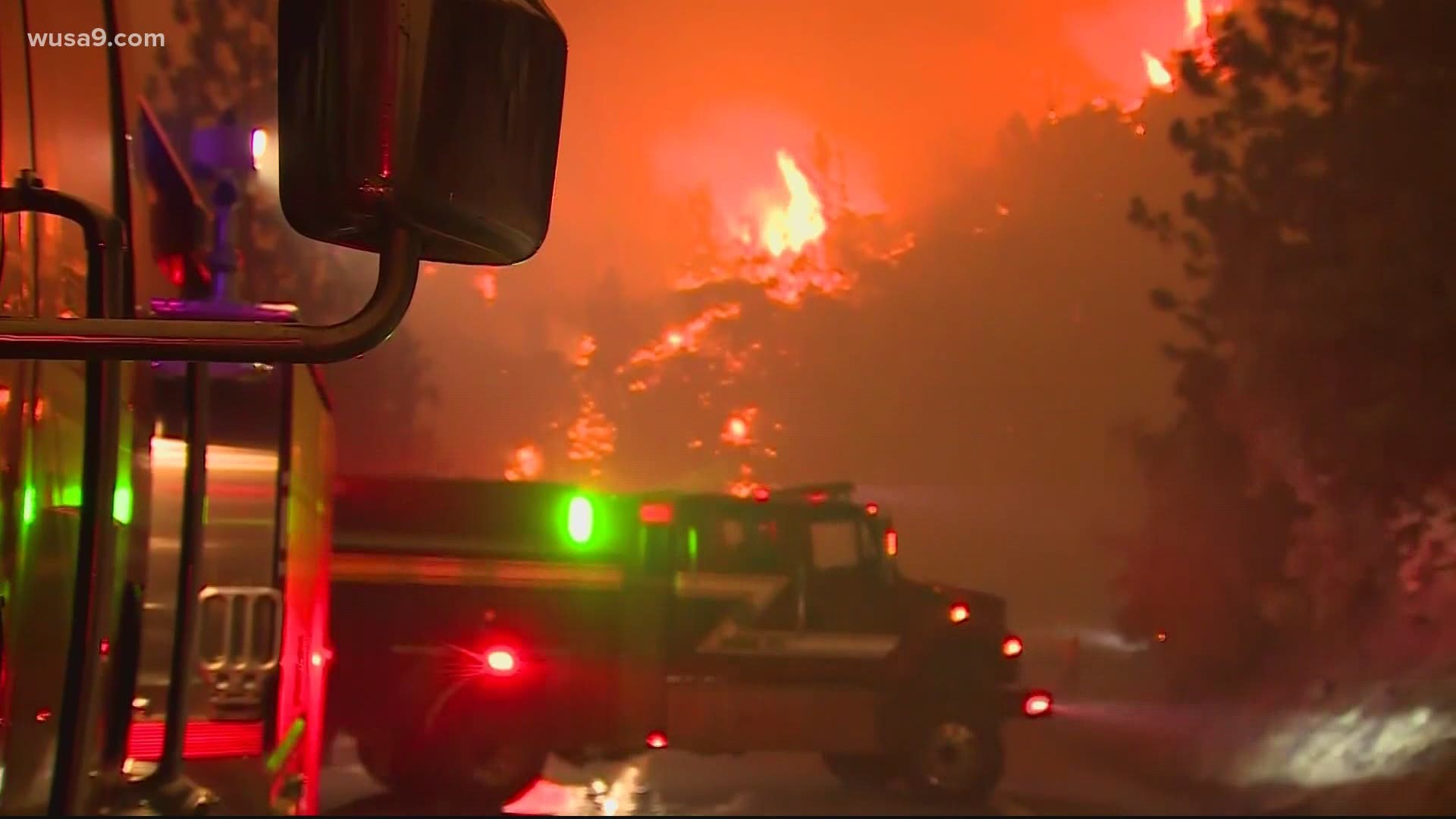 WASHINGTON, D.C., USA — With multiple deadly wildfires raging on the West Coast, crews from Maryland, Virginia, and Washington, D.C. have traveled to impacted areas to help.

So far, the fires have burnt millions of acres of land while killing more than 20 people and displacing thousands of others.

Smoke from the flames has also traveled states away and led to both gray, hazy skies and vivid sunsets in the D.C. region.

On Tuesday, Maryland Forest Service member Luke Marcek returned home after being on the front lines of wildfires in Colorado for three straight weeks.

"It was 21 days of working assignment and travel on top of that," he said. "We did a lot of fuel mitigation and removing flammable materials like trees, brush, dead grass.”

For Marcek, 2020 marks the seventh year in a row he has volunteered to travel to the West to fight wildfires.

The latest one for him, the Cameron Peak Fire in north-central Colorado, came as other large wildfires burned in Oregon, California, and Washington State at the same time.

"When you’re on one incident you try not to think of a different one," he said.

In total, over a dozen crews from Maryland, Virginia, and D.C. are on the West Coast to help in the response.

The Maryland Department of Natural Resources confirmed to WUSA9 that four crew members are currently assigned in Southern California while six others, including four from volunteer fire companies around the state, have been sent to Northern California.

On Tuesday, the DC Fire and EMS Department confirmed that a cadaver dog and his handler, a paramedic sergeant, were sent to Oregon to help search areas burned by wildfires.

#DCsBravest K-9 cadaver dog Seamus & handler Paramedic Sergeant John Hooker completed the 1st leg of their trip to the Oregon wildfires. Seamus, knowing he will be busy, decided to snooze on the plane. Hooker, a 12 year DC FEMS veteran , has worked with Seamus for 10 years. pic.twitter.com/6gMH2qSdON

Virginia Task Force 1, based in Fairfax County, also confirmed that two crew members were sent to the West Coast to help in the response.

After returning home from Colorado, Marcek described the wildfire work as both "exciting" and "fun" while serving a big need states away.

"It obviously gives a sense of satisfaction that you’re assisting where people need help," he said. "Out-of-state assignments are voluntary. It’s about the camaraderie, making good relationships with other agencies, and assisting the communities in need.”

With wildfires still unfolding on the West Coast, he told WUSA9 that he was glad crews from the D.C. region were able to lend a hand.

"What it says to me is all around the country, there are people who are certified in this and eager to help," he said.

RELATED: VERIFY: Will the haze from the West Coast wildfires affect us in the DC metro area?

RELATED: How to help support victims of California wildfires