In the video, VSP trooper Charles Hewitt can be heard telling the driver he will get his 'a** whooped.' VSP has placed Hewitt on administrative leave. 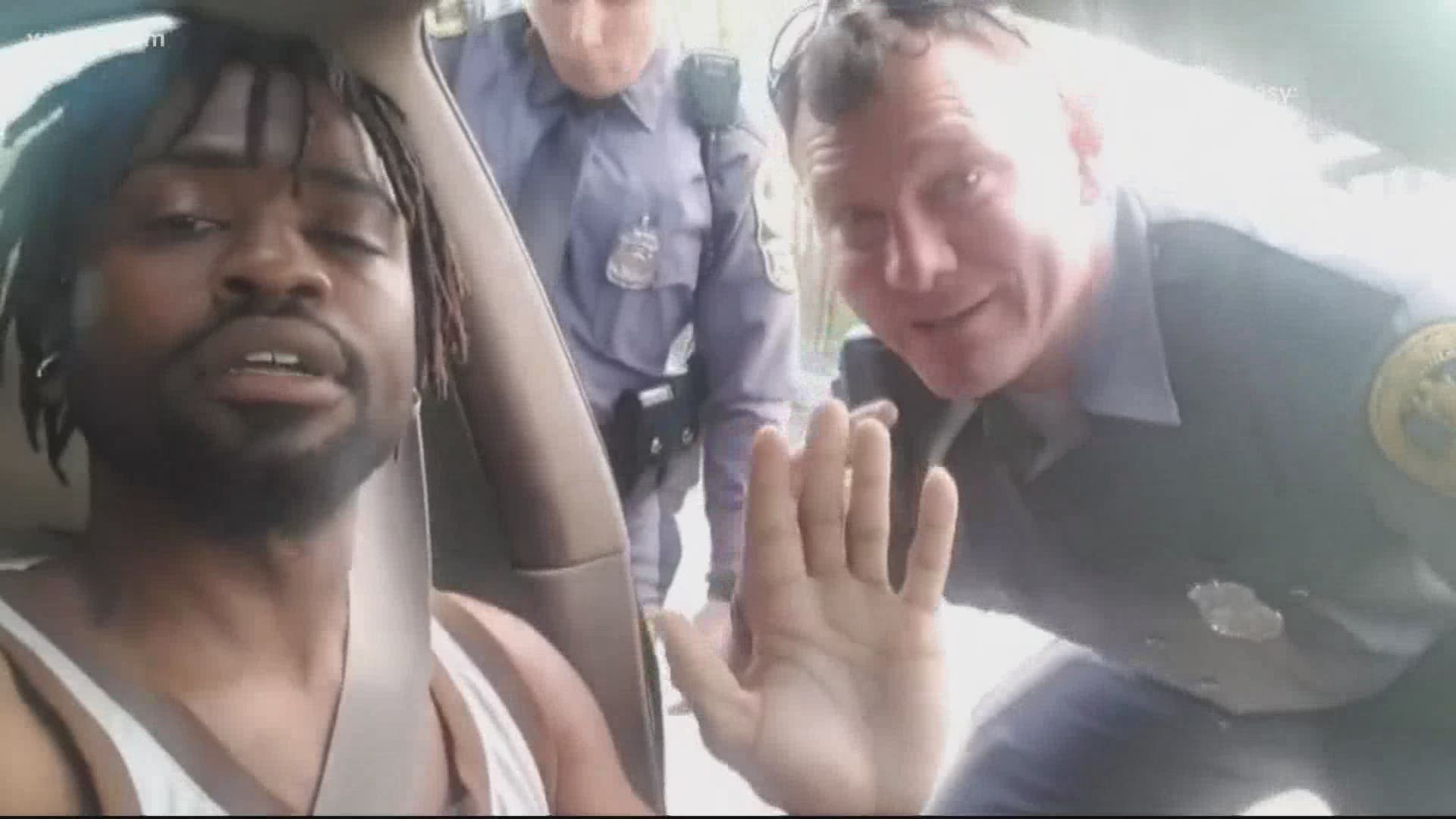 FAIRFAX COUNTY, Va. — A Virginia State Trooper is now under investigation after a video showed him pulling a driver out of a car with a chokehold in Fairfax County.

The incident occurred April 20, 2019, along the Beltway, according to Virginia State Police.

The agency said one of its troopers pulled over Derrick Thompson, of Woodbridge, Va., for having an expired inspection decal. When the trooper approached Thompson’s car, the trooper claimed to smell marijuana.

VSP said the trooper then called for backup to the scene. One of the officers who arrived was VSP Trooper Charles Hewitt.

RELATED: Black Lives Matter: There is nothing political about these three words

Thompson and Hewitt’s subsequent interaction have been viewed by hundreds of thousands of people online via a cell phone video Thompson recorded in his car, going viral after being posted this week by Thompson's lawyer.

Today, we sent a letter to @MarkHerringVA about Virginia State Trooper Charles Hewitt.

In April 2019, Derrick Thompson was driving to work when Hewitt terrorized and assaulted him. pic.twitter.com/YTSCeDLM9j

In the video, Hewitt can be seen asking Thompson to get out of his car. Thompson refuses to do so.

Eventually, Hewitt unlocks the door to Thompson’s car through the window.

“Take a look at me, I am a f**king specimen, buddy,” Hewitt yells to Thompson. “You’ve gotten on my last nerve.”

“You’re going to get your a** whooped in front of fucking Lord and all creation,” he said.

Thompson keeps his hands up throughout the video while commenting on his concern for his personal safety.

“I feel unsafe and I’m in no threat to these three officers,” he said.

Hewitt goes on to unbuckle Thompson from his seat in the video. He then counts to three for Thompson to get out of the car before staring directly into the cell phone, telling viewers to see what will happen next.

Hewitt can then be seen in the video dragging Thompson out of the car onto the Beltway by chokehold.

At this point, the two-minute video does not show what is happening outside of Thompson’s car. However, viewers can hear Thompson shout to Hewitt that the trooper is harming him.

“Sir, please get off my neck, I am not resisting,” Thompson said.

VSP said Thompson was eventually arrested and taken into custody at the Fairfax County Adult Detention Center where he was treated for an abrasion to his forehead.

On Wednesday, VSP revealed it had initiated a criminal investigation into the incident and that Hewitt had been placed on administrative leave. The agency claimed prior to this week it had not received any complaint concerning the interaction between Hewitt and Thompson.

“The conduct displayed by Trooper Hewitt during the course of the traffic stop is not in agreement with the established standards of conduct required of a Virginia trooper,” Settle said in a statement. “Nor is it characteristic of the service provided daily across the Commonwealth of Virginia by Virginia State Police personnel.”

Thompson hired Arlington attorney Joshua Erlich to represent him in the case. Erlich said there was a reason why Thompson took more than a year to reveal the incident to come forward with his story to the public.

“This is my client’s worst moment,” he said. “It was very hard for him to come to the decision that he wanted to go public with us. He thought about it. Then, he decided that this is what he wanted.”

Erlich said Thompson has yet to file a lawsuit against Hewitt or VSP. He said both he and Thompson are hopeful they can resolve the matter informally.

“Our focus, at this point, is making sure that Trooper Hewitt is appropriately disciplined, charged, if that's appropriate, and that he isn't patrolling Virginia's highways if that's the way that he carries [himself],” Erlich said.

While he said he was pleased to see Virginia State Police take the matter seriously, Erlich added that he and his client still have several questions and concerns.

VSP stated Wednesday that it also had conducted a use of force investigation immediately following the incident on the Beltway. But, Erlich said VSP never looked at the video Thompson recorded of the incident.

“My client had the only video and they didn't seek it out,” he said. “So, whatever kind of investigation was done previously, I think it was probably insufficient.”

Erlich also said Thompson’s registration had been expired at the time he was pulled over. However, he rejects another claim VSP made about his client before his arrest.

“It's important to note that there was no marijuana or any other contraband at the scene,” Erlich said.

Authorities charged Thompson with obstruction of justice, driving on a suspended license, and having an expired inspection claim after his encounter with Hewitt.

Fairfax County court records show Thompson pleaded guilty to the obstruction of justice charge. Erlich said he did not represent Thompson at the time of that decision.

However, Erlich added it was his understanding all the other charges against Thompson had been dropped. He said he was unsure as to why Thompson and his legal team negotiated to have the obstruction of justice charge stay.

VSP said when it concludes its investigation into Hewitt’s actions, it will turn over its case file on the incident to the Commonwealth’s Attorney for final review and judgment on the matter.

“The Virginia State Police adheres to strict policies regarding employee conduct and requires our employees to perform their duties with exceptional professionalism and integrity, and to treat the public with fairness and respect at all times,” VSP’s statement reads.

Erlich said he is hopeful VSP will take the appropriate actions after that.

WUSA9 reached out to the Virginia State Police Association for a statement on the matter, and also asked the association whether Hewitt had a statement he would like to make regarding the incident. WUSA9 has yet to receive a response.