VA delegate wants to give Arlington and Alexandria back to DC 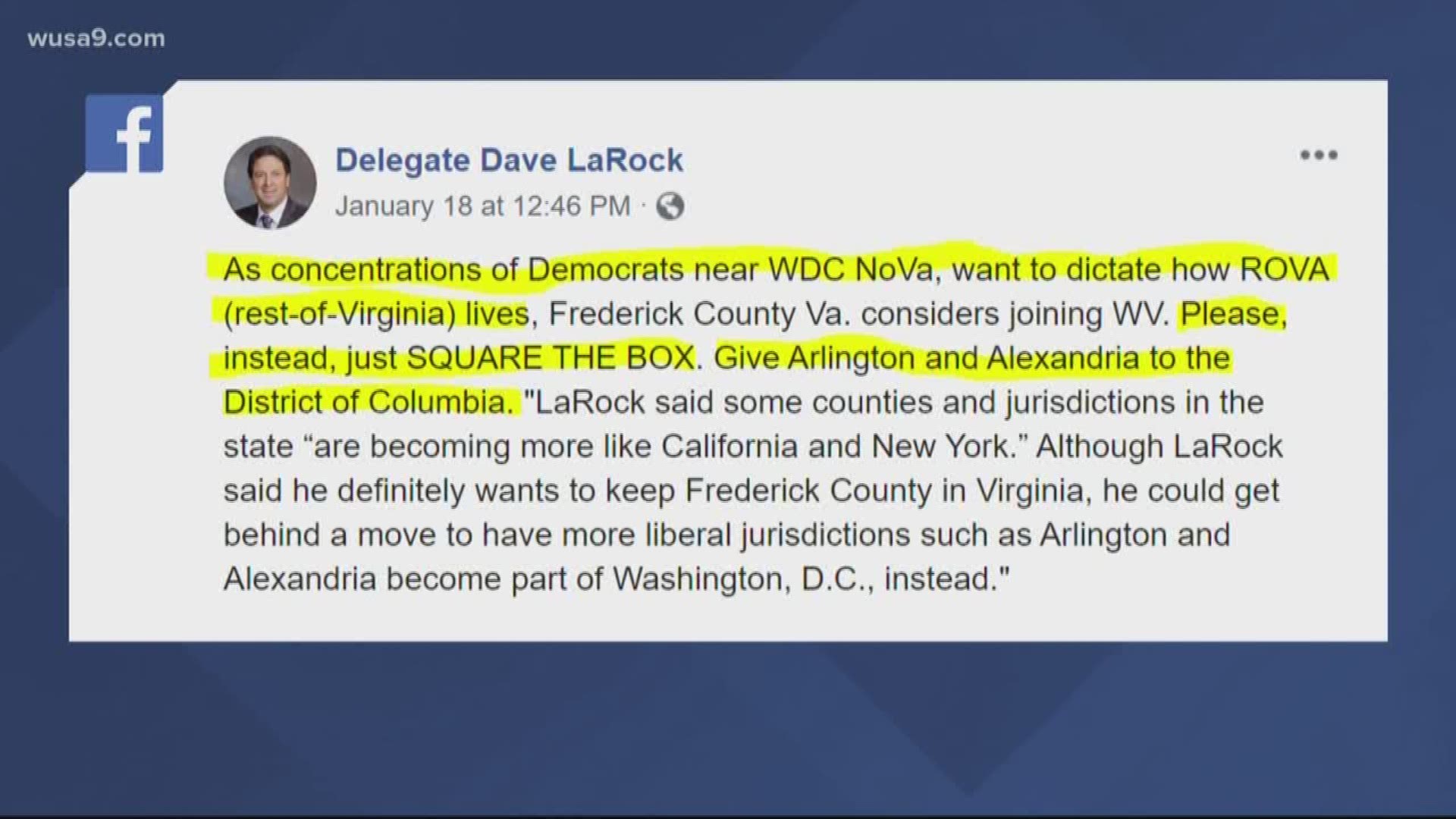 WASHINGTON — Virginia Delegate Dave LaRock wants to kick Alexandria and Arlington out of the Commonwealth.

Larock (R-Frederick, Loudoun and Clarke Counties) argued in a Facebook post that the jurisdictions are "becoming more like California and New York," than like the rest of Virginia, and that the "liberal" areas are trying to "dictate how ROVA [rest of Virginia] lives."

Arlington and Alexandria have grown rapidly and seen a steady influx of immigrants. Progressive Democrats from Northern Virginia helped flip control of both the state Senate and House of Delegates in the last election.

Alexandria and Arlington were part of D.C. until 1846, when the areas became part of Virginia. At the time, Alexandria was a major slave-trading port.

"Yes, Northern Virginia generates a lot of revenue, but they're also going to control where it's spent," LaRock said in an interview with WAMU."It's one thing to have a partner who's wealthy... but if it isn't being distributed throughout the state, then that's a reason to terminate the partnership," he said.

In a post on his campaign Facebook page, he suggested the transfer to "square the box," referring to the missing chunk of the diamond on the map that is D.C.

Monday's pro-gun rally in Richmond convinced LaRock. He suggested in an interview that if there isn't a peaceful resolution -- like sending Northern Virginia back to D.C. -- there might be open rebellion.

The out-of-the-blue idea has people across the Commonwealth talking. But that doesn't seem to include elected officials in Arlington, Alexandria or D.C., as none of the ones WUSA9 asked for comment were eager to talk.

RELATED: West Virginia wants Frederick County to switch states. Here's how it would rank if it did

D.C. Mayor Muriel Bowser declined to take a question about whether she'd want Arlington and Alexandria back. But she is interested in D.C. statehood.

"I represent 700,000 taxpaying Americans who are just like every one of your citizens, except our Congresswoman doesn't vote, and we don't have two Senators," she said during the U.S. Conference of Mayors in Washington.

Historians said it was the lack of representation that had Northern Virginia itching to break away from D.C. from the start.