“It was like they were sent from somewhere else, from a higher power,” Virginia Waller-Torres said. 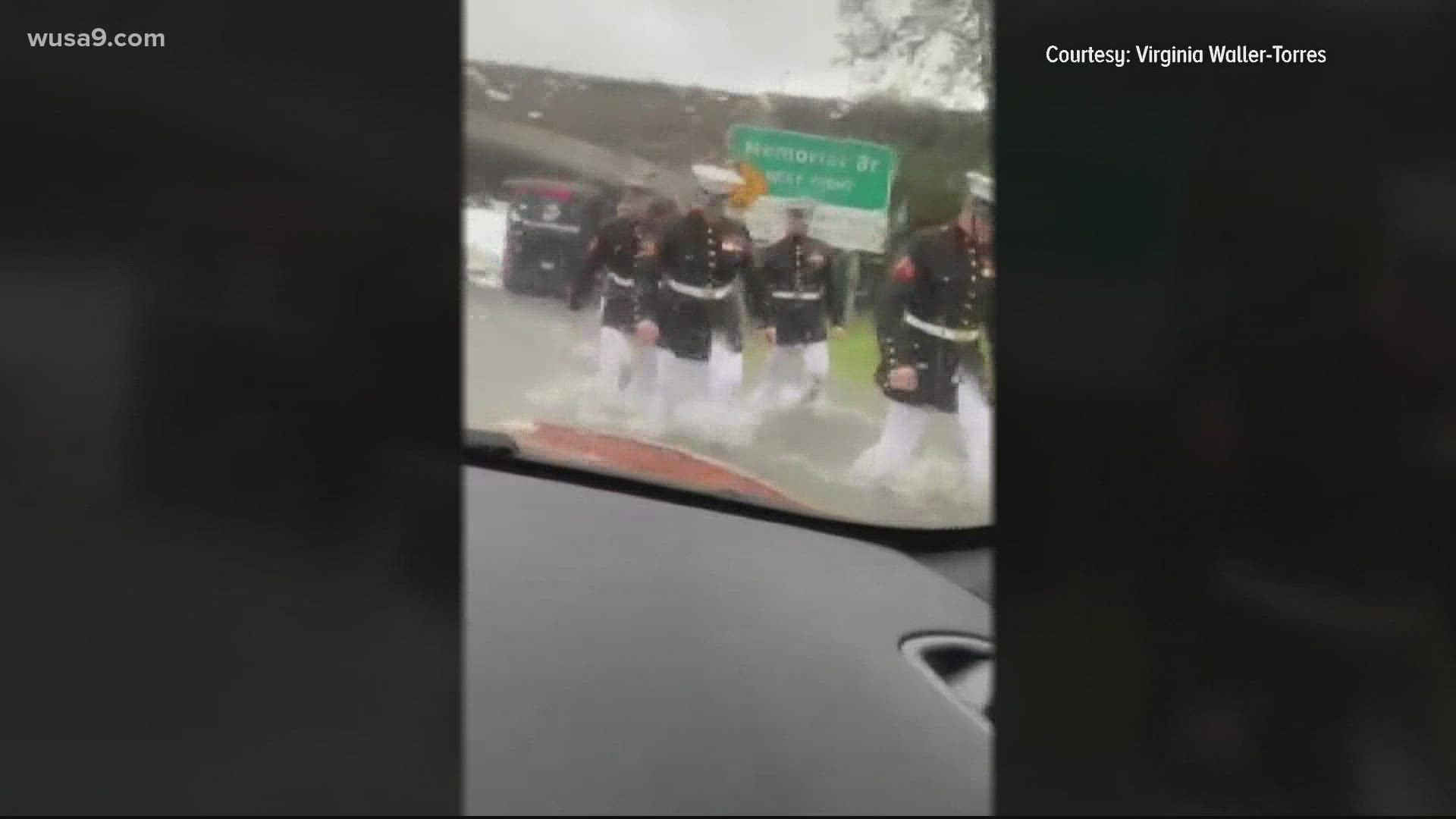 WASHINGTON — She said a prayer to be saved from deepening flash flood waters outside Arlington National Cemetery, as a deluge hit the District Thursday. Within 45 seconds, a bus full of U.S. Marines showed up.

“It was like they were sent from somewhere else, from a higher power,” Virginia Waller-Torres said. “I thought I could die, a truck could hit us. And it was as though, somebody heard me.”

Waller-Torres hit ‘record’ on her phone, as soon as she saw six Marines march through the water. They were all in dress uniforms, all Marine Corps Body Bearers – an elite unit which performs funeral services within Arlington’s hallowed grounds.

Her rescuers were strong enough to have once lifted flag-draped caskets containing the remains of President George H.W. Bush, and Rep. John R. Lewis. Pushing a Mini Cooper out of knee-deep waters would not be a problem.

All while Waller-Torres was recording, she can be heard saying, “Marine power!” as her stalled car is pushed to drier ground. The Hagerstown-based artist then posted the video to TikTok, with the clip now approaching 1 million likes.

“It's just about doing the right thing when no one's looking,” said Cpl. Jared Tosner, one of the Body Bearer rescuers. “We weren't expecting anyone to be recording or looking. We just wanted to do the right thing.”

Waller-Torres reunited with both Cpls. Wojtowicz and Tosner at the Marine Corps barracks in Southeast Washington Monday. Both Marines were met with an embrace and a high-five, as they presented her with a gold challenge coin.

“Since you’re a part of the Body Bearers now,” Cpl. Tosner offered.

What the Marines didn’t realize during the rescue, was that Waller-Torres’ grandfather was a World War II veteran, buried in Arlington. Her father was in the Navy during the Persian Gulf War, and she was born in the Panama Canal Zone.

“My father said in the Gulf War, he did, and continues to have, such respect for the Marines,” Waller-Torres said. “I sent him the video, and he called me back, and he started crying. Because it was so emotional for him.”

The rescue was emotional for the young artist as well.

“It should also be just what's expected form humanity in general,” Cpl. Mitchell Wojtowicz replied. “This shouldn't be an outlier case.”

“And if people just reciprocate that, and do good unto others, I think our country is headed in a good direction,” Cpl. Jared Tosner added.

RELATED: Two patients who battled COVID-19 together in hospital for months have emotional reunion