Brandon Howard, of Hopewell, Virginia, said he showed up to Del. Mark Levine's home to protest an assault rifle bill. 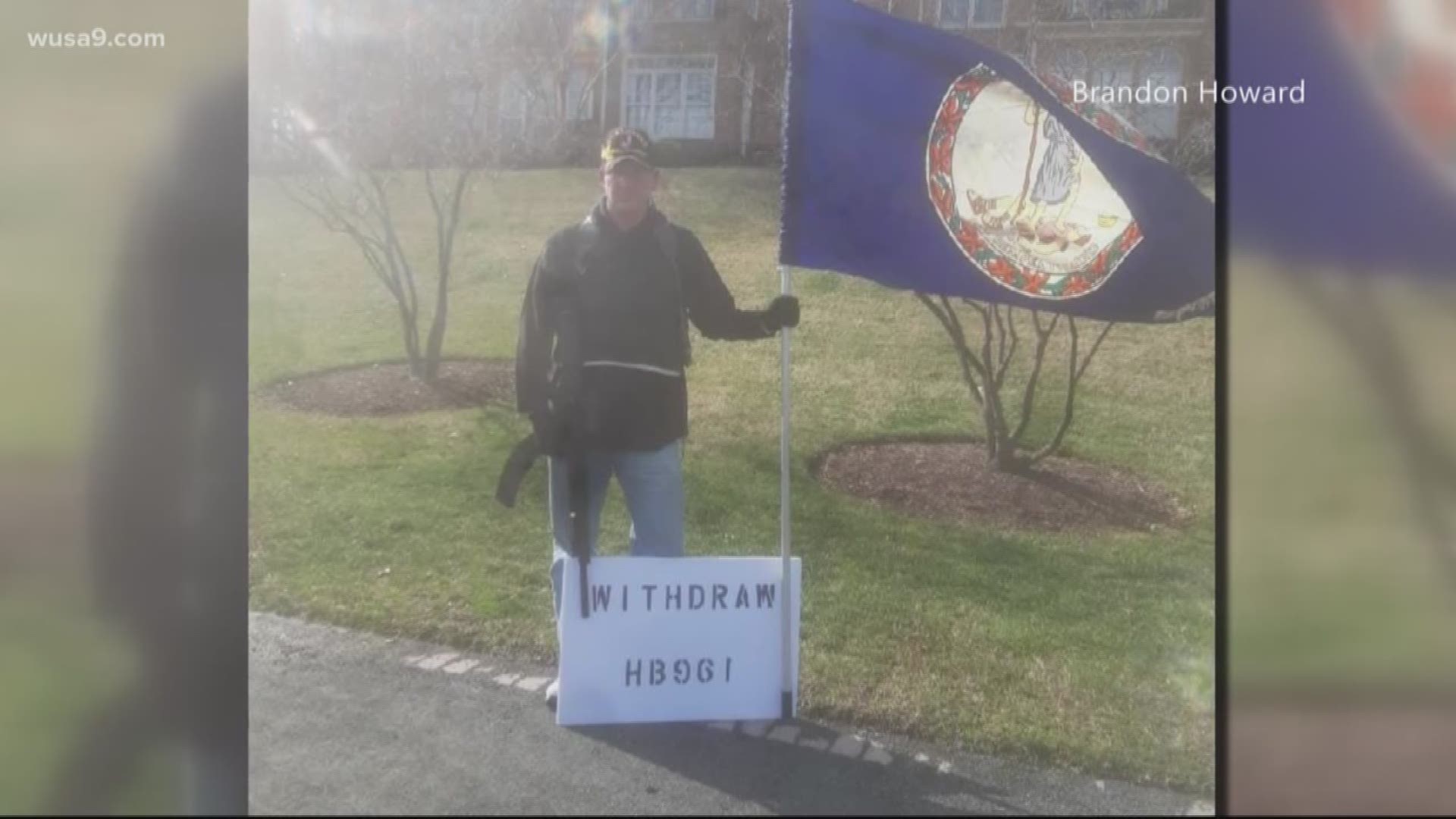 ALEXANDRIA, Va. — A Northern Virginia lawmaker said he plans to press charges against a gun rights advocate who showed up to his home with a shotgun.

The bill, which was sponsored by Levine, proposed prohibiting gun dealers from selling, renting, or trading assault rifles to other people.

Levine, as first reported by Virginia Public Media, watched Howard walk in front of his home from a window. He said he believes Howard, the Hopewell GOP Chairman and founder of Right to Bear Arms Virginia, was trying to intimidate him.

According to an Alexandria Police Department spokesperson, the incident is under investigation. However, the spokesperson added that he was of the understanding that Howard was within his rights to carry in a public space.

"If the law does not allow me to press charges, if the law is insufficient, well, that's one of the advantages of being a lawmaker," he said. "I plan to introduce legislation to make sure anyone who comes outside our home with a gun to try to coerce us to change our views on legislation is prosecuted."

Howard said he showed up to Levine's neighborhood with a 12-gauge shotgun with the intent to be peaceful. But, he said it was important for him to publicly protest a lawmaker he characterized as "a domestic enemy" to the Constitution.

"I can redress my grievances, with my government, where I see fit," Howard said. "In the park, at his home, behind his house. It's perfectly legal."

Howard said an Alexandria sergeant showed up to Levine's neighborhood to ask him for his concealed handgun permit. After Howard handed over his documentation, he said the officer left the area.

"If the delegate felt intimidated or threatened, he just admitted to being a tyrant, because only a tyrant would be intimidated and threatened," Howard said.

Levine addressed the incident with Howard earlier this week on the floor of the Virginia House of Delegates. He said Howard decided to voice his concerns with the legislative process in an inappropriate manner.

"In America, if you don't like what your government is doing, vote for someone else," he said. "Never threaten an elected official with a gun. It's never going to get me to change my mind."

Prior to protesting outside of Levine's home, Howard posted a video to Facebook to announce why he had traveled to Northern Virginia.

At the end of the video, Howard said anyone who tries to take any of his firearms will get the "business end" of a gun.

When USA9 asked Howard to explain that comment, he said, "That is a foreshadowing of what this nation's heading to, because we got tyrants trying to put chains on the people."

RELATED: VERIFY: No, the Virginia governor did not propose sending the National Guard to confiscate guns

RELATED: This Virginia Republican urges people to give their friends guns for Christmas