Verify: Did Obama deport more people than any other president? 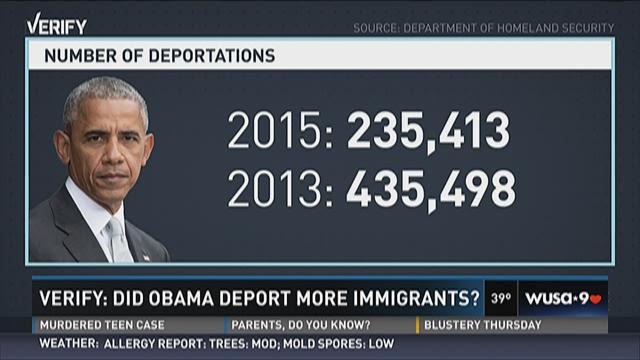 Did President Obama deport more people than any other president?

We can verify, it is true that a record number of people were deported when President Obama was in office.

We got the numbers from the Department of Homeland Security for the year 2015, when President Obama was President.

That year, Immigration and Customs Enforcement, or ICE, removed or returned some 235,000 people. And that was a low year.

In total, Obama had deported more than 2.5 million undocumented people by 2015. Compare that to the two terms of his predecessor, President George W. Bush, when just over 2 million people were deported.

WANT TO VERIFY SOMETHING?

Anytime you question one of our stories or anything else you see in print on TV or in your social media feeds, write to us and ask us to verify. You can also reach out on Twitter, Facebook or email us at newstips@wusa9.com.

Verify: Was a Russian spy ship spotted off Delaware Coast?