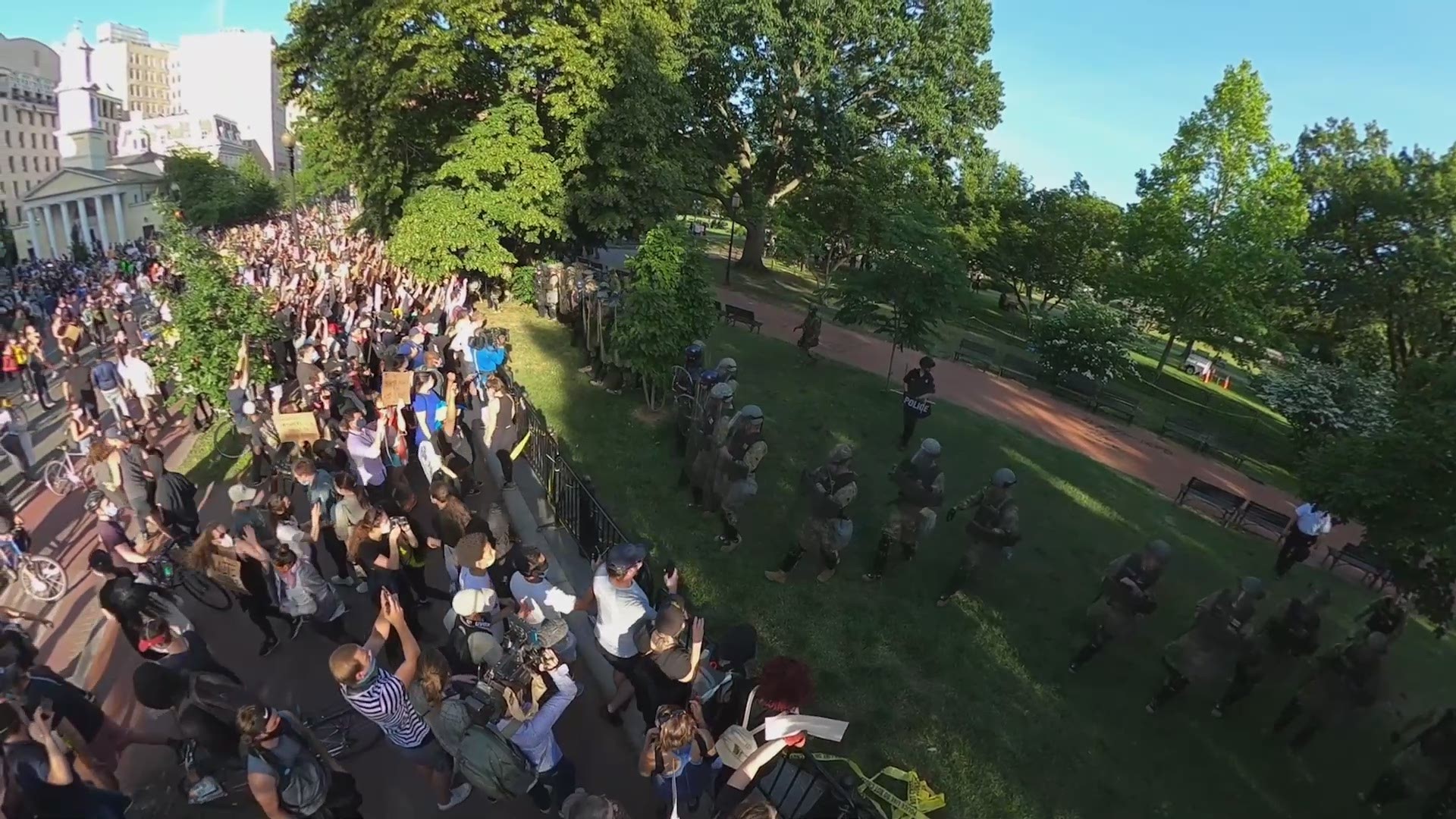 WASHINGTON — We watched it this past June on the streets of Washington: military service members clearing protesters near the White House and downtown. One officer spoke out, claiming his commanding officers were on the verge of giving unlawful orders. Now, a group of military justice experts has said it will provide legal help to soldiers should there be post-election protests.

On June 1, D.C. National Guardsmen advanced to the fence line of Lafayette Square Park as protests over the killing of George Floyd occurred there and elsewhere in the city.

The D.C. National Guard did not directly confront protesters as federal police and D.C. Police did during those summer days. But even supporting the operation to clear protesters from Lafayette Square Park was enough for National Guard Major Adam DeMarco to come forward to Congress:

"In the days following June 1, I struggled to process what had taken place, to the point where I was sleeping very little," said DeMarco. "I knew something was wrong, but I didn’t know what."

Whether something was wrong with the tear-gassing and physical force is now subject to protester and ACLU lawsuits against federal police and MPD. All police agencies named in the lawsuit deny wrongdoing. The question remains: What if it happens again?

"I don't have a crystal ball. Events have been unfolding in ways that no one could have predicted," said Eugene Fidell, director of The Orders Project.

Fidell and 10 other lawyers with military justice experience formed The Orders Project, a hotline for active duty military service members. If they are called into our city streets again after the election and believe they have been given unlawful orders by the president or the administration to confront peaceful protesters, they can refuse, according to Fidell.

"The first line of defense for people in the service who need some guidance should be the services themselves," Fidell said.

The Orders Project says it recognizes that in the heat of the moment during or immediately after protests, soldiers may be hesitant to bring their legal concerns up the chain of command. It aims to provide independent and confidential legal aid.

"The person who disobeys an order does so at his or her peril. I mean, you're kind of rolling the dice," Fidell said.

There is history behind the debate of what makes a lawful versus unlawful military order. Fidell gave several examples of unlawful orders that service members followed, including the 1968 My Lai Massacre of villagers in Vietnam by US Army soldiers and the 1970 Kent State University massacre of student protesters by the Ohio National Guard.

While DeMarco does not believe he was given an unlawful order, he believed it came so close that he needed to speak out.

"I am in a position as a major in the U.S. Army National Guard where I can do something, and that’s why I decided to come forward," DeMarco said.