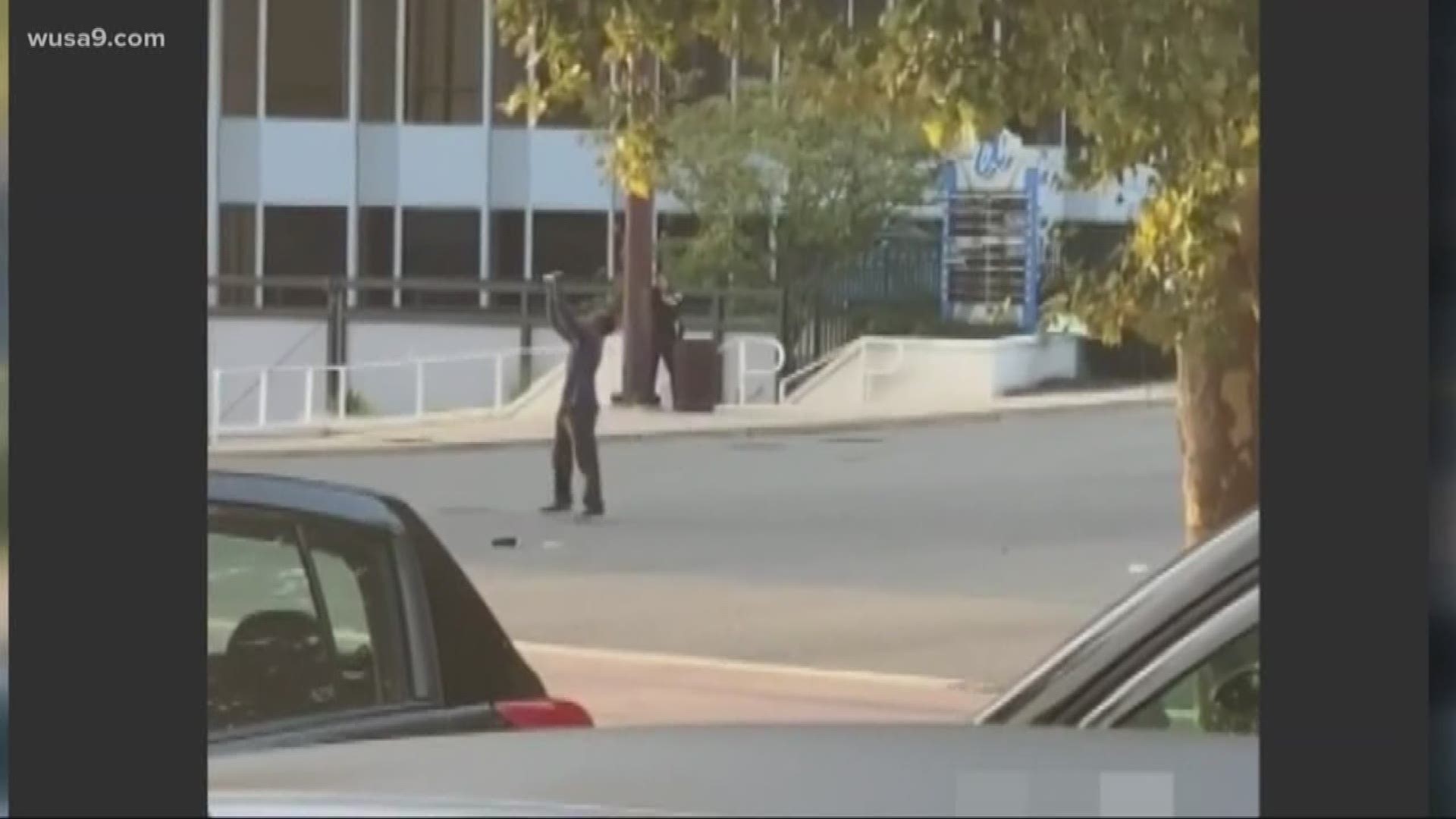 HYATTSVILLE, Md. — A man armed with two knives was shot and killed by police officers Thursday morning in Hyattsville after the officers said they used eight non-lethal weapons to try and deescalate the situation.

The Hyattsville Police Department received a call at 7:14 a.m. from a coffee shop near Toledo and Belcrest roads saying a man had struck an employee in the head with a metal pole three days earlier, and was back at the shop with two knives.

Officers from Hyattsville, Mount Rainier and Prince George’s County went to the scene along with a K-9 unit. Officials said 10 officers tried to disarm the suspect using non-lethal methods over the course of 30 minutes.

Amal Awad with the City of Hyattsville's Police Department said three different officers deployed a Taser, which was unsuccessful. While trying to contain the suspect, another officer deployed pepper spray, which was also unsuccessful.

Awad said a supervisor then got to the scene armed with a non-lethal shotgun filled with bean bags. Awad said the suspect was heard saying he "embraced death," and told the supervisor, "I'm going to get you."

An officer deployed a flash bang in an attempt to disorient the suspect, and the supervisor then deployed the non-lethal shotgun.

Instagram user @princessbigcheef posted the moments that led up to 49-year-old Leonard Shand being shot by police. 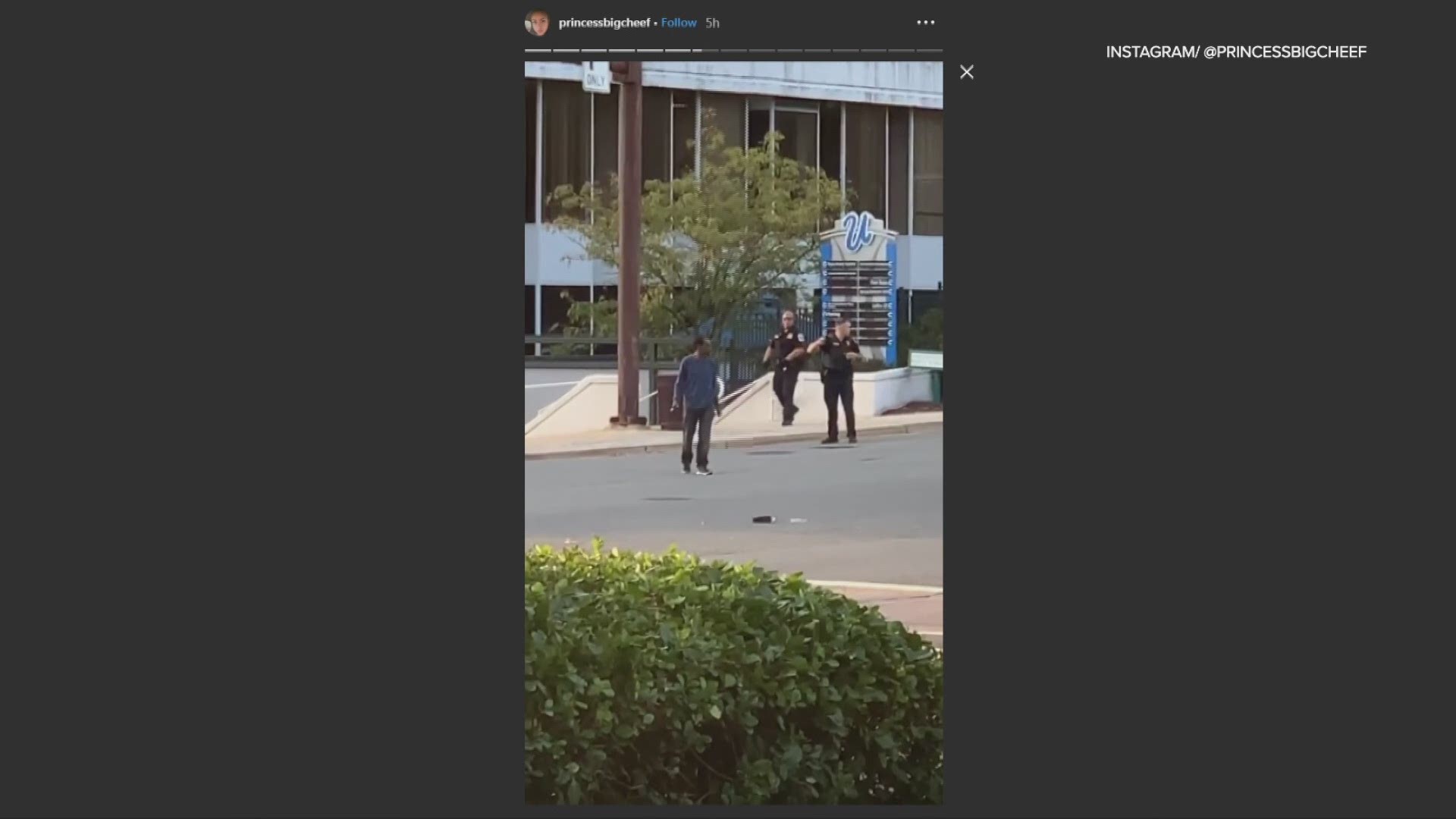 Note: WUSA9 edited the video to not show the moment the suspect was shot.

After the four bean bag shots, one pepper spray and three Taser rounds weren’t effective in disarming the suspect, the suspect "charged" toward the officer with both knives. Several officers then deployed their issued firearms, and the suspect was fatally shot.

"We have a total of six City of Hyattsville police officers who did deploy their firearms," Awad said. "Prince George's County responded to the scene to assist our officers as well throughout the deescalation -- three of their officers also discharged their firearms. And the City of Mount Rainier police department responded to assist again with deescalation, and one officer also discharged his firearm."

The suspect has been identified as 49-year-old Leonard Shand, and his last known address was in New Carrollton, police said.

"In the 28 minutes between the first engagement and when shots were fired, officers used all non-lethal methods available to them," Jennifer Donelan, director of Prince George's County Media Relations Division, said.

Two knives were recovered at the scene.

No explanation has been given as to why there was blood on one of the knives.

"Investigators are currently analyzing hours of body-worn camera, dash-cam and cell phone video of this incident.

"We will release the names of our three PGPD officers who were involved in this incident on Friday. As is standard operating procedure, our officers are on administrative leave pending the outcome of the investigation. Any questions about the identities and statuses of the Hyattsville City and Mount Rainier officers should be directed to the respective departments.

"At the request of both Hyattsville City and Mount Rainer Police Departments, the Prince George's County Police Department's Special Investigative Response Team will lead the investigation into the officers' actions surrounding this morning's incident.

The American Civil Liberties Union of Maryland on Thursday afternoon also released the following statement regarding the officer-involved shooting that left the 49-year-old man dead.

"A Black man was killed in Hyattsville this morning. He was in a disoriented state when officers with the Prince George’s County, Mt. Rainier, and Hyattsville Police Departments shot and killed him during a confrontation. Given the pattern of Maryland law enforcement officers gunning down Black and Brown people and their selective release of information, we are challenging the officers' narrative. Their language only continues to paint victims as threats while wiping their hands clean of any wrongdoing.

"The police claim to have spent nearly 30 minutes containing this man and using 'less than lethal force,' which is not the same thing as de-escalation. Based on the press conference PGPD gave, there was no mention of a health professional ever called to come on-scene to peacefully de-escalate the situation. Instead officers followed the man with their guns pointed.

"Officers used a flashbang grenade, which inevitably led to the killing of this man, who has not yet been identified. Running away from an exploding flashbang grenade is a natural and inevitable response. The police created a dangerous situation, causing an armed man to run towards them, and then used the inevitable result of their actions as the justification to shoot him.

"This was exemplified today with the PGPD Twitter account (@PGPDNews) choosing to release photos of bloody knives that the victim was alleged to have been carrying, instead of the vast body cam and/or dashcam footage that they claim to have of the incident. Bystanders, however, have taken numerous videos of what happened. In the footage released, nobody was seen to be stabbed. The police officers shot multiple times, and not only left bullet holes in the victim’s body but bullet holes in nearby buildings that could have easily hit any other passerby.

"Poor training and systematic racism are not excuses for Maryland police agents to kill Black and Brown people at will with no accountability. Together we must put a stop to police brutality and the needless killings of Black and Brown people. We cannot afford to fail in this goal because lives are at stake. #BlackLivesMatter"

RELATED: Police respond to gunfight between cars in DC 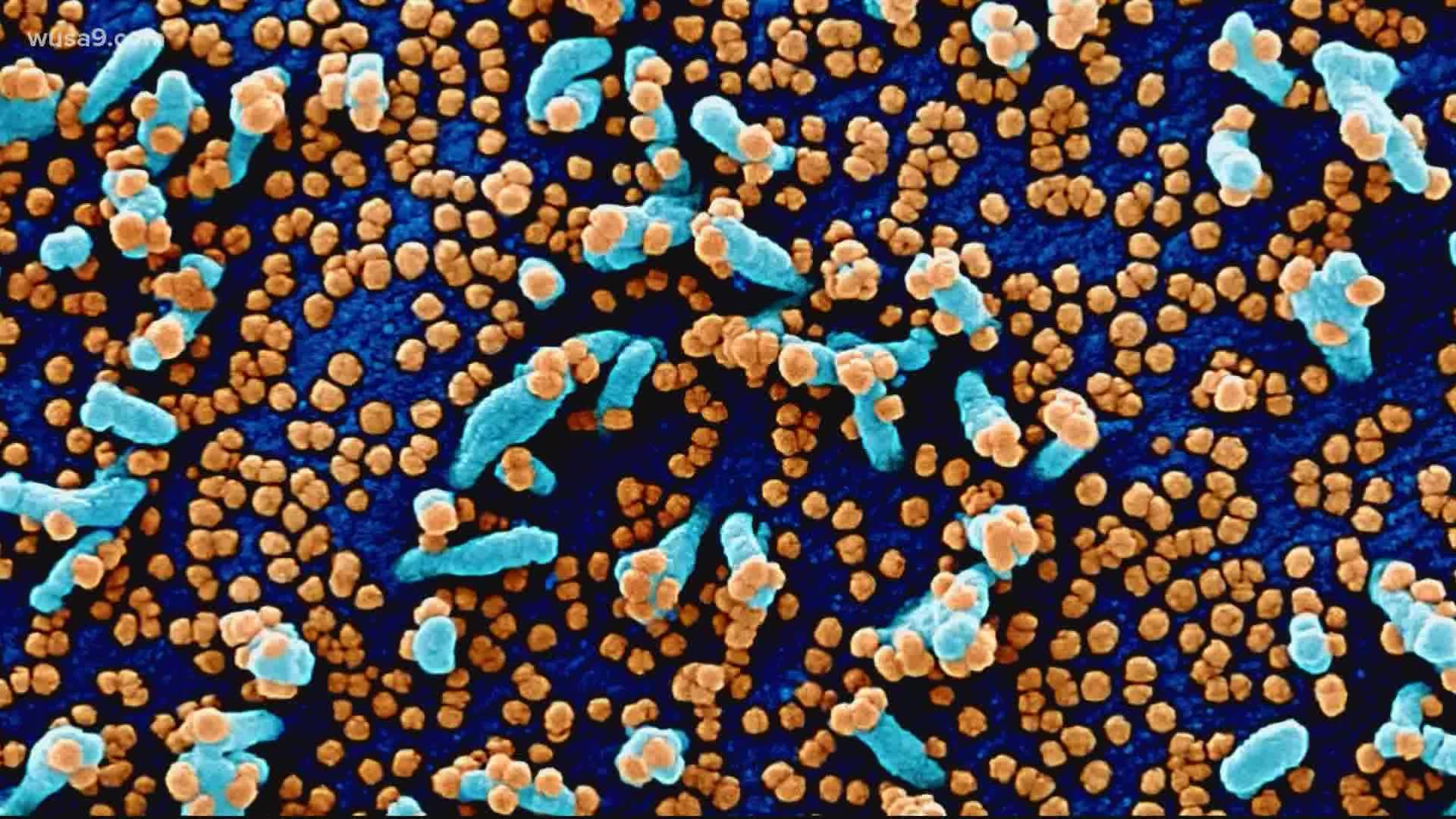