More than 1,260 people have asked to pause plans to build a new K-8 school at the intersection of Fort Washington Road and East Swan Creek Road. 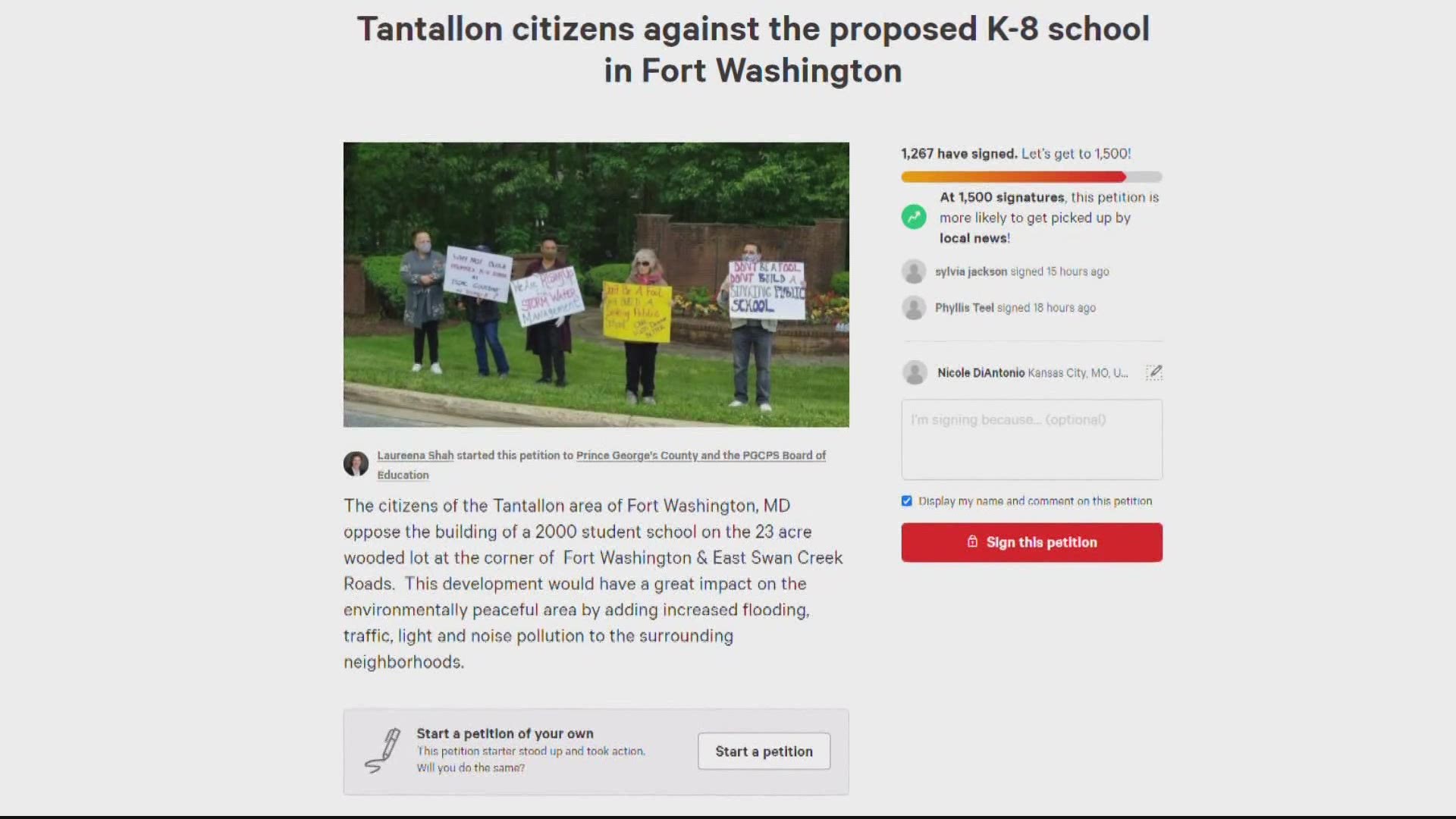 FORT WASHINGTON, Md. — There is a petition growing online about plans to build a new K-8 school in Prince George’s County.

The proposed school building is scheduled to be built at the corner of Fort Washington Road and East Swan Creek Road.

As of Friday morning, more than 1,260 people have signed a Change.org petition to protest the building.

“The citizens of the Tantallon area of Fort Washington, MD oppose the building of a 2000 student school on the 23-acre wooded lot at the corner of Fort Washington & East Swan Creek Roads. This development would have a great impact on the environmentally peaceful area by adding increased flooding, traffic, light and noise pollution to the surrounding neighborhoods,” organizers wrote on the online petition.

Nancy Bhargava organized marches throughout the neighborhood nearly six weeks ago to protest the proposed school.

"We’re concerned that we have been ignored. Our community, the residents here have been dismissed," said Bhargava.

On Saturday, Bhargava plans to be back out at the intersection of Fort Washington Road and East Swan Creek Road, ahead of a scheduled groundbreaking next week.

"I'm concerned because we are going to be losing a lot of tree canopy. The tree canopy absorbs the water and prevents the water from flowing out into the road and into my house, my backyard and my neighbor's yard and causing serious issues," said Bhargava.

Ed Burroughs, a member of the Prince George’s County Board of Education representing District 8, was at a previous march talking with homeowners.

In a letter sent to the Chief Executive Officer of the Prince George’s County Public Schools on March 23, 2021, board member Edward Burroughs wrote “I am writing to convey concerns that I have received from members of the community regarding the proposed site for the new Southern Area K-8 School. These members raised a variety of concerns in over an hour-long exchange between constituents and some of their elected officials.”

The letter went on to say, “Members of the community have expressed a strong desire to temporarily suspend construction activity surrounding the Southern Area K-8 School in order to allow the Board Chair to convene the proposed stakeholder meeting and discuss alternative locations for the school. I support the community in their request and I hope that the request for a pause in the development of this site can be granted. I look forward to continuing to work with you to successfully build a new Southern Area K-8 middle school while also addressing the flooding and traffic concerns raised by members of the community.”

Some homeowners worry that tearing down acres of the wooded area will increase flooding in a neighborhood already prone to floods. They worry the problem will get significantly worse when construction begins.

“We’ve had repeated flooding, redoing the whole basement, losing many treasured photographs. My late husband was in the military and had awards that you think would be preserved so they would be safe. We also lost family photographs and memorabilia,” said Fort Washington homeowner Dr. Flavia Walton.

Other homeowners worry about the impact on traffic. The proposed location is near Indian Head Highway, a roadway known to be dangerous.

“Being here on Swan Creek Road, if you are here at any time of the day, cars come down here at least 50 miles per hour so it is not safe for our residents nor is it safe for any of the children,” said Anthony Mitchell, a homeowner.

Now some homeowners are trying to delay construction until they can work out these issues.

“They need to stop and they need to go through a comprehensive independent assessment of where we are as a community and what needs to be done,” said homeowner Brian Woolfolk.

RELATED: Neighbors in Fort Washington area share ongoing concerns about flooding that has lasted many years

In a statement posted online, District 8 Councilmember Monique Anderson-Walker asked for a comprehensive study to be done before construction begins.

“Flooding in South County is a historical and resource-draining scourge throughout District 8. My concerns with this project have always been directed at the flooding impact on the residents who live in closest proximity to the school on Swan Creek Road, as well as the potential for increased flooding in surrounding neighborhoods," said Anderson-Walker. "Ensuring the project planners are giving EVERY consideration to environmental, traffic, and flood mitigation strategies and solutions through engagement with the community, independent third-parties, and an objective analysis of the school’s master plan and proposed stormwater management plan, is paramount,” Councilmember Monique Anderson-Walker wrote on March 28th, 2021.

It is a topic some homeowners in the Fort Washington area plan to discuss with school board leaders at the Tantallon Square Civic Association meeting Wednesday evening.

WUSA9 reached out to the Prince George’s County School District and were sent the following statement:

"Prince George’s County Public Schools officials have met with the Tantallon community approximately 11 times over the past nine months where we have heard concerns about stormwater at the school site. Based on the community’s feedback, the school system has developed and enhanced rigorous stormwater management practices that will substantially reduce the uncontrolled water coming from the site. This plan was approved by Prince George’s County as a requirement to move forward with building the new school. In working with the County, we have identified various site improvements that will relieve significant flooding in the area. We believe these measures will help to control the flow and speed of water from the site."

RELATED: Most PGCPS students will fully return to classroom this fall