"This is a beautiful neighborhood and we love it but we have not really received that much assistance since we’ve been here." 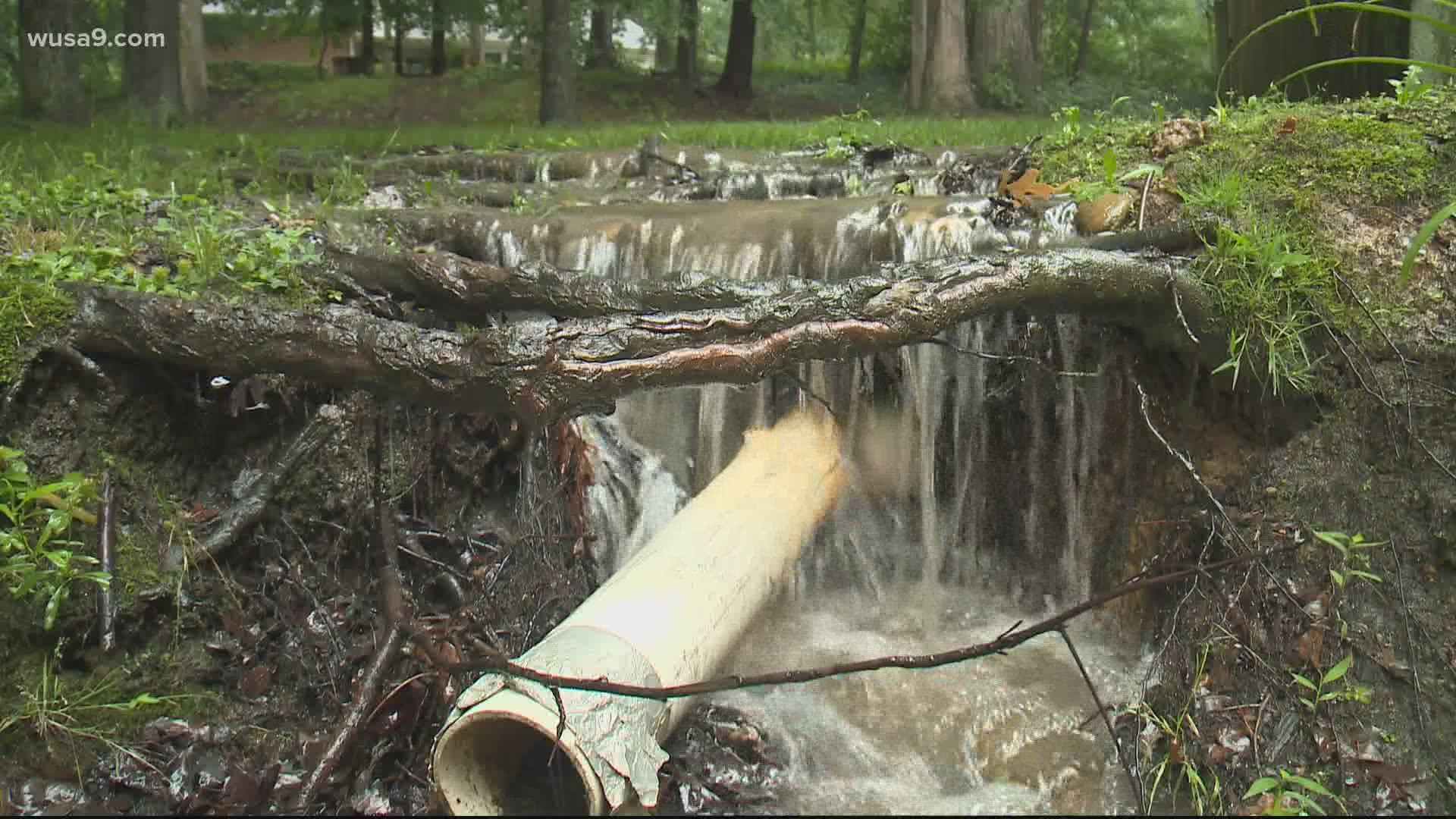 FORT WASHINGTON, Md. — Every time it rains, some neighbors in the Tantallon area near Fort Washington brace for the potential of flooding. WUSA9 sat down with several neighbors who all live on Swann Creek Road and shared concerns they face living in the area.

We spoke with one homeowner who had their finished basement flooded with sewer water several times. Another neighbor said their mobility van destroyed. Another said it’s become a safety issue. On more than one occasion, they had to call the fire department and said fire and rescue crews could not reach their home because of flooding.

"We've had repeated flooding, redoing the whole basement, losing many treasured photographs. My late husband was in the military and had awards that you think would be preserved so they would be safe. We also lost family photographs and memorabilia," said Dr. Flavia Walton.

Dr. Flavia Walton moved to the Tantallon neighborhood in Prince George's County after falling in love with the community. But over the years, the fond memories she has of the place she's lived, come with continuing worries over flooding.

"The main sewer line on Swan Creek Road backed up into my basement so I had a basement full of sewage," said Dr. Walton.

Virginia Boldon moved to the neighborhood more than 30 years ago.

"The flooding on my side has been extensive, I’ve just had to make so many improvements to the home just to dry and keep it dry," said Boldon. "This is a beautiful neighborhood and we love it but we have not really received that much assistance since we’ve been here."

County officials say the flooding issue is caused by an aging infrastructure and all the recent development in the area.

These issues and concerns are heightened by the fact Prince George's County, Maryland, wants to put a school in this area, meaning that flooding could become an issue for people commuting to and from the school.

A Change.org petition has been started to protest the building of the school and has over 700 signatures.

In a state meant posted online, District 8 Councilmember Monique Anderson-Walker asked for a comprehensive study to be done before construction begins.

"Flooding in South County is a historical and resource-draining scourge throughout District 8. My concerns with this project have always been directed at the flooding impact on the residents who live in closest proximity to the school on Swan Creek Road, as well as the potential for increased flooding in surrounding neighborhoods," said Anderson-Walker. "Ensuring the project planners are giving EVERY consideration to environmental, traffic, and flood mitigation strategies and solutions through engagement with the community, independent third-parties, and an objective analysis of the school’s master plan and proposed stormwater management plan, is paramount."

Neighbors like Dr. Flavia Walton want more transparency about the flooding issues and what officials in the county are doing to deal with the flooding in the Tantallon area, especially with the plans for the new school being developed.

"I’m very invested in the community and I don’t want to leave. I love this community I love my neighbors," said Dr. Flavia Walton.

Councilwoman Anderson-Walker also released a statement from her office on Monday about the issues concerning this neighborhood and the new school development:

Prince George's County Public Schools released the following statement to WUSA9 in regards to the incident:

"Prince George’s County Public Schools officials have met with the Tantallon community approximately 11 times over the past nine months where we have heard concerns about stormwater at the school site. Based on the community’s feedback, the school system has developed and enhanced rigorous stormwater management practices that will substantially reduce the uncontrolled water coming from the site. This plan was approved by Prince George’s County as a requirement to move forward with building the new school. In working with the County, we have identified various site improvements that will relieve significant flooding in the area. We believe these measures will help to control the flow and speed of water from the site."