Scores of D.C. churches, mosques, and synagogues are pledging to resist the Trump Administration's deportation plans.The houses of worship are offering sanctuary and help to migrants threatened with detention. They're calling it SanctuaryDMV. 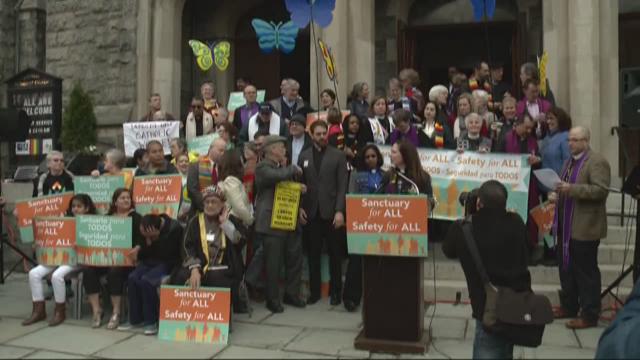 Scores of D.C. churches, mosques, and synagogues are pledging to resist the Trump Administration's deportation plans. The houses of worship are offering sanctuary and help to migrants threatened with detention.

They're calling it "sacred resistance" and SanctuaryDMV.

Hundreds of the religious leaders gathered outside Foundry United Methodist Church on 16th Street Northwest and then marched to the White House as church bells pealed.

Many of them carried elaborately painted huge butterflies on poles, which have become a symbol for migrants.

"Humans, like butterflies, often have to move to survive," said artist and activist David Thurston.

The protesters came from 60 congregations and 17 religious traditions.

"I'm not expecting a phone call from the president to ask for my advice," said Bishop Mariann Edgar Budde, who leads the Washington National Cathedral, where the president prayed on his first full day in office. "I feel like we have the opportunity to change the moral tenor of the country. And from there, the president will act."

Veronica, who didn't want to give her last name, fears she could be deported soon. She says she's lived here for 17 years with her husband, a Korean War vet, and now with her four children. Two of them are disabled, one with cerebral palsy. She faces an immigration hearing on April 4.

"My family will be destroyed if I'm not here to take care of them," Veronica said.

Supporters of President Trump defend the immigration crackdown by pointing to crimes, like the rape of a girl at Rockville High School this month, allegedly by two immigrants. One of the suspects was already facing deportation.

At mass meetings they've been having, the religious leaders have also been trained on how to respond rapidly to reported ICE raids.