On International Women’s Day, hundreds of women and men gathered outside the Department of Labor in D.C. and marched to John Marshall Park for the Women Workers Rising rally. 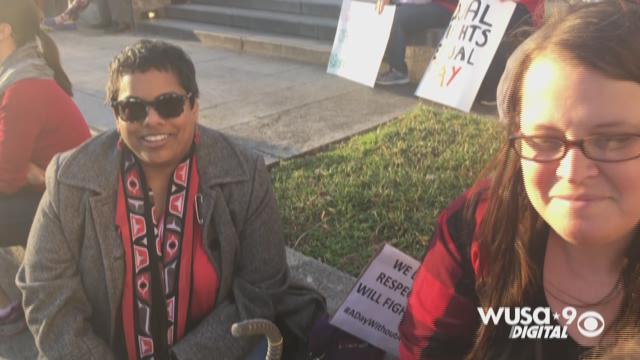 They came from different backgrounds, but all for the same cause—equality for women in the workplace.

On International Women’s Day, hundreds of women and men gathered outside the Department of Labor in D.C. and marched to John Marshall Park for the Women Workers Rising rally.

“I’ve worked with male coworkers who always make more than me, and it’s just not right,” said Suzanne, a nurse who attended the rally with her daughter, Ozwyn, and a relative. “I want my daughter to be able to have the same rights as my son.”

“I want kids tomorrow to work and live to the best of their potential to be able to grow to be the leaders, the strong people they can be and not to be told they can’t and not to be told ‘you’re a girl stay in your place,’” added Ozwyn’s aunt, Radha.

RELATED: Different reasons, same cause for many on International Women's Day

Speakers and performers at the rally called for equal pay, a fair living wage, and paid leave.

“I think it’s really important that we have equality, and I just don’t see it going in the right direction,” said Mae, who was wearing a pink hat she made for the Women’s March on Washington. She said she felt compelled to do something.

Friends Gelila and Mikella took the day off to spend it at various rallies in D.C., including one outside the White House. They’re part of a Women’s March “huddle” group based out of Arlington, Va. and said hearing women’s emotional stories helps them connect with their cause.

So many women requested the day off for a ‘Day Without a Woman’ Wednesday, two school local districts had to cancel classes.

When asked about those who said the ‘Day Without a Woman’ movement was disruptive to schools and didn’t help the cause, Gelila didn’t hold back.

“It’s a personal choice just like you go on vacation,” she said. “So, the fact that people are mobilizing and doing it at the same time just shows how important this issue is and how it affects everyone. They say ‘oh we’re affecting the schools,’ but you know what we’re doing this for the children. We’re doing this for the generations to come. In a way, we’re making this small sacrifice to make a big point.”

RELATED: 'A Day without a Woman': Political statement or recognition of women?

Lisa, a visual artist who lives and works in D.C., said it’s time for women to come together.

"The days of undercutting each other, it really needs to end. Women really need to step up to support one another, and I really think that’s the big missing piece of the puzzle in our culture right now, is that women don’t always support women.

Women also got the support of several men.

“I’ve come from a very strong mother who I admire a lot and respect a lot and women don’t get respect they deserve,” said Aaron, who’s from England, but his mom grew up in Pittsburgh.

“Women’s rights need to be fought for because it’s a male dominated world, like white men like myself, and I realize we need to stand alongside women, but stand alongside, not lead the fight,” Aaron said.