In a WUSA9 exclusive, a company dedicated to putting instructors in the classroom who look like the kids they teach is awarded one of education's largest donations. 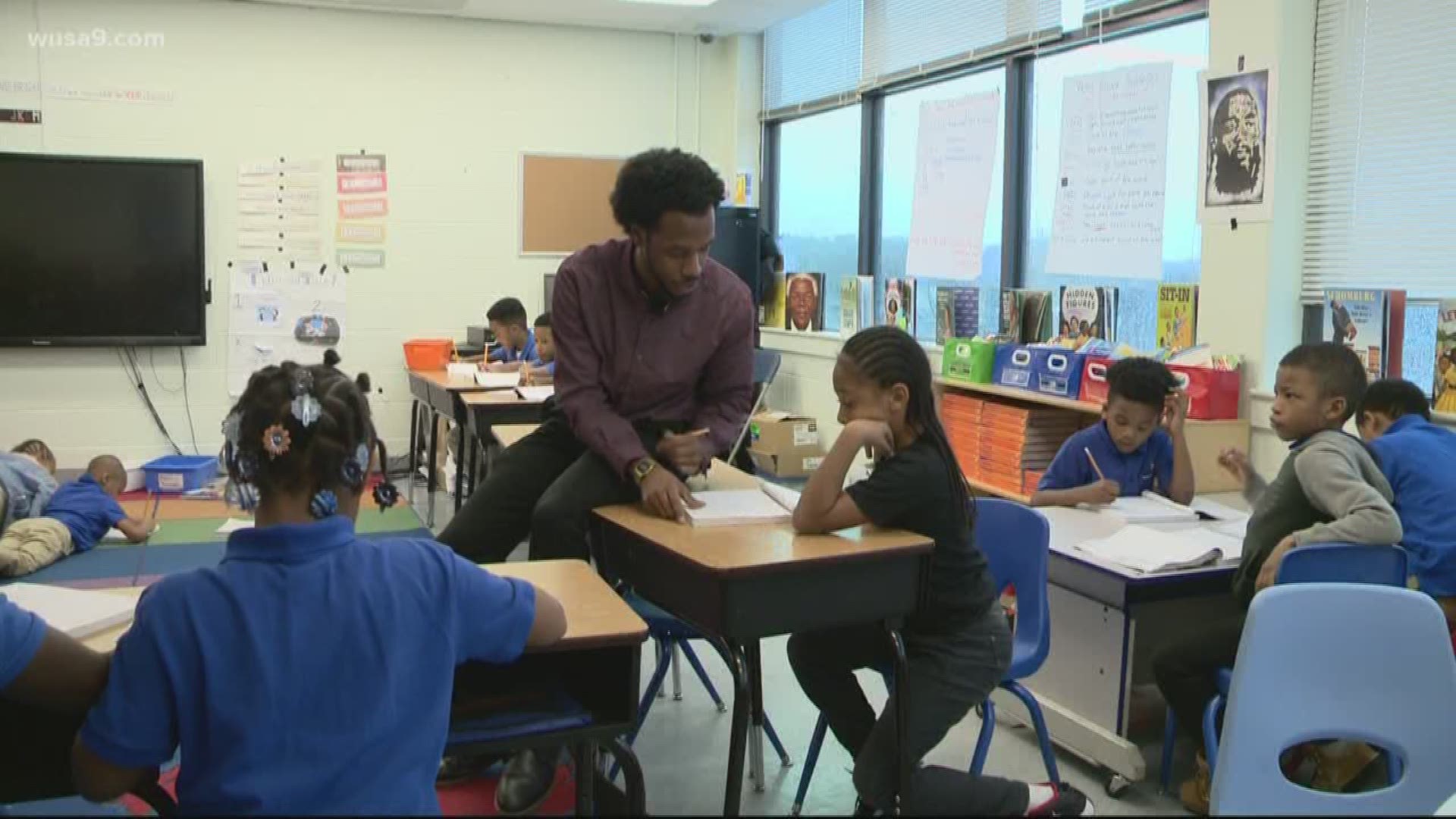 WASHINGTON — Going on 10 years, Urban Teachers has used statistical data, cultural common sense and plucked every person in love with teaching they could find to prove a point: When your child is taught by people who look like them, who grew up in much the same way they did, chances are your kids will be that more excited about learning and continuing to further their education.

"We were all in different places on a conference call and we were like, 'Wow, we really got this,'" recalled Jacqueline Grier, Urban Teachers' Chief Program Officer, as she sat in her office by Eastern Market in Southwest Washington last week.

"We landed the opportunity to bring nearly 1,000 black educators into our programs," Grier said. "And then we all cried."

WUSA has learned exclusively that a $25 million grant, roughly the annual budget for their entire 140-person employee workforce, was gifted to Urban Teachers by Ballmer Group -- the foundation started by Connie Ballmer and her husband, Steve, the Microsoft billionaire and now the chairman of the Los Angeles Clippers.

About 50 of Urban Teachers' staffers are based in D.C. The grant money, which was awarded in May, will be dispersed in January among the three cities in which the organization operates -- Washington, Baltimore and Dallas.

Not only one of the most generous donations in recent public school history, the grant is sure to usher in a novel approach at closing the country's education gap -- one that has nothing to do with test scores, neighborhood or class.

"The data shows that for boys of color outcomes are better when they have teachers of color," Grier said.

In point of fact, 60 percent of grade-school children in America are kids of color. Of that number, 42 percent identify as black.

By 2023, Urban Teachers' goal is to annually train, coach and employ 200 male and female African-American teachers in Washington, Baltimore and Dallas -- and get them to remain in a profession with much too much turnover.

"It's not always where they want to go financially," Grier added. "But now, to provide monetary and non-monetary support, to tell them to be the teacher you want to be and give them the resources to do that, that's empowering."

One of those recipients is Malcolm Wyche, a 25-year-old, second-grade teacher at Eagle Academy Public Charter School in Southeast Washington. In his second year with Urban Teachers, he is a 2-percenter -- meaning Wyche represents part of just 2 percent of American public educators who are African American males. Between 76 to 80 percent of teachers are what most of us have come to know growing up: Caucasian women.

"I thought about my friends and me and I was like, 'Wow, I didn't have any black teachers until I got to college and Howard,'" Wyche said last week in Eagle Charter's library. "Racial identity is important, because when you see someone who looks like you, you begin to believe you can do this too -- whatever that may be."

Wyche (a.k.a. "Mr. Malcolm" to his students) is originally from Oakland, Calif. He received his BA in communications from Howard University two years ago.

For him, the program means giving the children in his class an educational experience he never had growing up. He started the Black Children's Library Project a year ago, soliciting donations of either books or money to help fill bookshelves of literature that featured African-American characters and stories.From The Birth of Hip Hop and DJ Hercules and beyond, his classroom resembles the classroom he always wanted.

Antoinette, a hilarious, 7-year-old in a pink blouse, credits "Mr. Malcolm" with "being my greatest teacher ever because he helped me to read."

Giggling, she added, " My favorite book is 'The Boy Who Burped Too Much!'

There is a sweet irony behind the generosity of the donation: It came from the family of an owner of an NBA team, a man who was able to purchase the Clippers only after the original owner, Donald Sterling, was banished from the NBA for his outright racism in 2014. Enter Steve Ballmer, a stout, balding white billionaire whose team, made up of 90 percent African-American players, vowed to boycott the playoffs if Sterling remained.

Jamal Crawford, the NBA's three-time sixth man of the year, played for the Clippers under both regimes. He sent WUSA9 a video Monday thanking Ballmer for not just his generosity but his social conscience.

"You've always cared about the right things in life," Crawford says into his iPad camera. "Even as the years went on, you didn't just care about things pertaining to what your interests might be. You care about everybody, and that says a lot. Keep doing the work you're doing and I'm proud to call you a friend."

Wyche, asked to sum up why a man from the other side of the country would OK $25 million to help bridge America's education gap in a novel way, replied, "I think it says that people are starting to realize that cultural identity is a thing and it matters."

"We were really grateful for the support," Grier added. "If we can get another 1,000 teachers to impact 30,000 students and they become college-going kids, this is the kind of work that can transform communities."

Ballmer Group is dedicated to bettering the lives of children and families who are disproportionately likely to remain in poverty. They attack this problem by investing in broad, systemic change. The grant is indeed the kind of commitment that can, in the words of Urban Teachers CEO Peter Shulman, "disrupt systems of racial and socioeconomic inequity."

In real-world terms, instead of recruiting, maybe five teachers from Howard who have the gift of working with children like Wyche, it means they can recruit between 10 to 15 a year, travel to more cities and recruit more good souls which, of course, means more classrooms full of children who learn to love reading, "The Boy Who Burped Too Much."

RELATED: She refuses to leave. He quit halfway through the school year. Why some DC teachers stay and why some go

RELATED: 'No principal lasts here' -- What it's like to work at a school with the worst turnover rate in DC