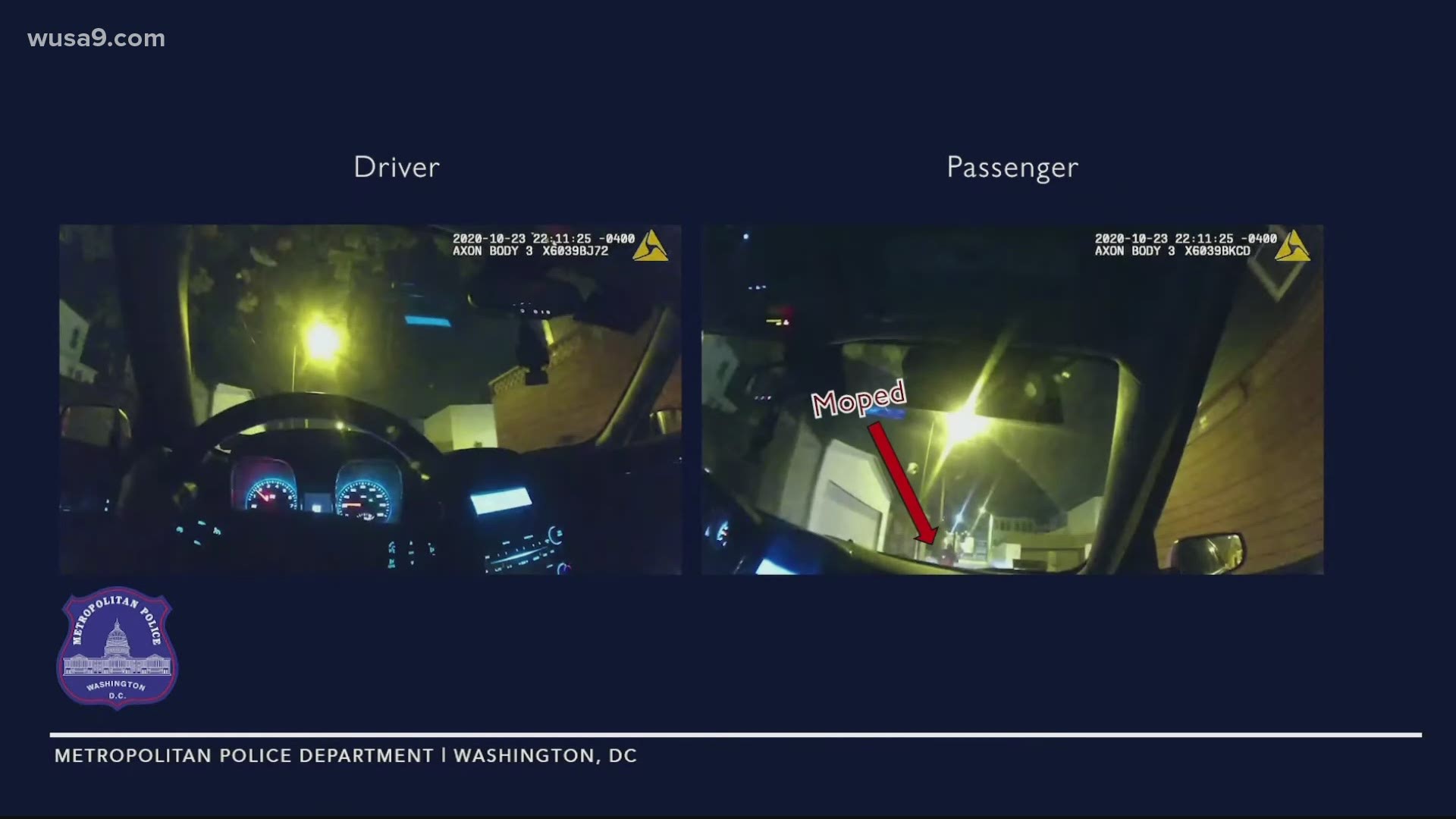 Hylton died Monday after he crashed a moped into a vehicle in the 700 block of Kennedy Street, Northwest on Friday night following an attempted traffic stop by D.C. police.

The body cam starts off from the view of the officer in the front-seat passenger side, with the MPD vehicle driving alongside Hylton riding on a Revel electric moped. Hylton pulls in front of the officer's vehicle, and the vehicle turns to follow, activating the police lights shortly thereafter.

The vehicle follows Hylton on the moped for almost two minutes, crossing streets and driving down alleys, turning the car's police lights off, on again and off once more before Hylton's moped entered into oncoming traffic on Kennedy Street, striking a van.

You can watch the first 2 minutes of the body cam released leading up to the fatal crash below. We have chosen not to show the entire video of the crash and the aftermath due to its graphic nature.

During a news conference Thursday afternoon alongside Mayor Muriel Bowser, D.C. Police Chief Peter Newsham could not say why officers were attempting to initiate a traffic stop.

Newsham said if the incident involving Hylton were merely a traffic issue, the officers should not have chased, per MPD's pursuit policy, but that they were not sure if that was the case or not.

Bowser said that D.C. Police officers were following the scooter that Hylton was riding, despite the policies against chasing vehicles.

"We have very clear policies about no chasing. It should be obvious by now. Why? Because chases can be dangerous," Bowser said during the news conference.

All four officers involved in the incident have been put on leave, Bowser said.

Newsham during the news conference declined to say whether the pursuit of Hylton was justified or not. He confirmed that he didn't know why officers were trying to stop Hylton.

The U.S. attorney will handle the case before D.C. Police officials are allowed to talk to the officers, Newsham said.

According to Chief Newsham, four officers were in the police car as part of a "crime suppression unit."

RELATED: 'Somebody has to answer' | A mother demands justice for her son after a fatal moped crash

#BREAKING In body cam video just released by DC Police, there’s no sign the cruiser struck Karon Hylton, 20, before he collided with a car. Big question is whether they continued to pursue him after it was clear he wouldn’t stop. That’s a serious violation. @wusa9 pic.twitter.com/rfZ3MYih5Z

Thursday's news conference regarding the bodycam video comes after two nights of protests at the Fourth District police station on Georgia Avenue in Northwest D.C.

A protective fence was put up around the police headquarters Wednesday after protesters broke several windows at the station Tuesday evening. The crowds were able to break through the fencing, banging on the doors of the station chanting "justice for Karon" and "who do you serve, who do you protect?"

Officers in riot gear emerged from the building, forming a police line. A standoff occurred between the police and protesters, with officers stationed outside station doors and forming a bike barrier at the nearby intersections.

RELATED: 'Somebody has to answer' | A mother demands justice for her son after a fatal moped crash

D.C. Police said several officers sustained injuries but did not know how severe the injuries are or exactly how many officers were hurt at the time.

Newsham confirmed during Thursday's news conference that 14 officers were injured -- eight were hit by explosives, four were hit by rocks/bricks -- and eight protesters were arrested.

A crowd first gathered outside the Fourth District police station Tuesday night, demanding accountability from the officers involved in the incident, body camera footage to be released and a full police report from the incident -- which D.C. Police originally declined to release; saying the incident report includes personal information about the driver of the passenger vehicle that collided with Hylton.

To watch the Mayor's full news conference from Thursday, click the video below: