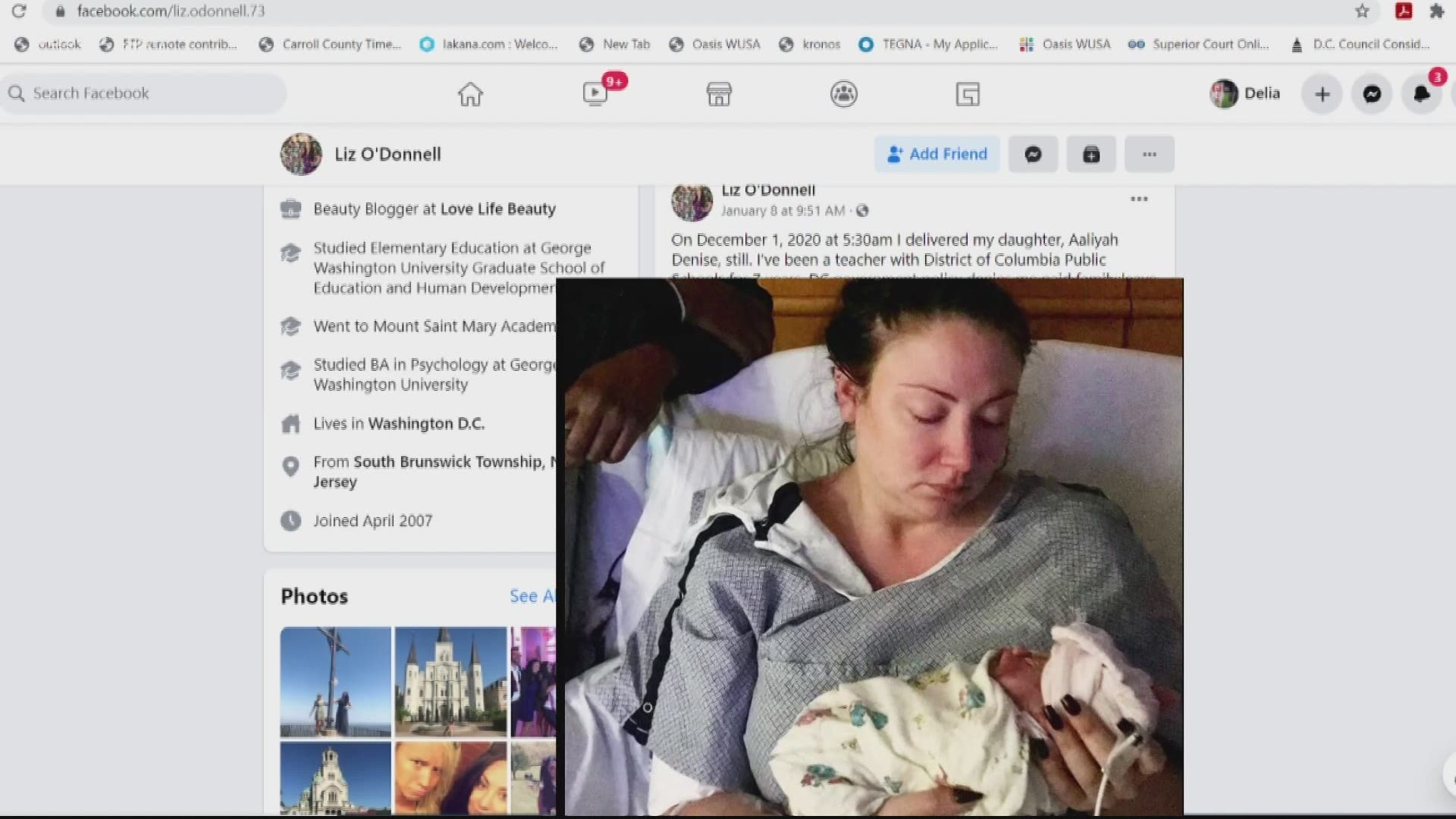 WASHINGTON — A DC Public School teacher said she was denied paid family leave after giving birth to her stillborn child.

Elizabeth O’Donnell shared her story on her Facebook page with a heartbreaking photo attached. It's of her in a hospital bed gazing down at baby Aaliyah as she lay wrapped in her mother’s hands.

“It's difficult to look at a picture like the one I posted,” said O’Donnell. But there is strength behind the pain of this post. It is the moment a mother said goodbye to her stillborn baby: the one she carried for 37 weeks. Dreamed, celebrated and fought for.

“I birthed a child and I need recovery time from that,” she explained, “That's really all I'm asking for is the physical recovery time to heal.”

O’Donnell, who is a first-grade math and science teacher at Watkins Elementary school in Ward 6, said she delivered at George Washington Hospital on December 1, 2020. After 48 hours of labor, she said she needed surgery to control her bleeding.

The teacher said when she applied for paid family leave through DC Public Schools — she was denied.  “It was just kind of stated, ‘Well, since Miss O'Donnell cannot provide a birth certificate, we cannot grant this leave,’ she recalled about a conversation between her lawyer and a DCPS representative.

O’Donnell’s attorney said they believe the “District’s interpretation of the Paid Leave Law is wrong.”  According to DCPS’s website, 8 weeks of paid leave is available “for the birth or placement of a child.”

“I just couldn't understand that if in the policy it says birth of a child, how are you going to tell me that I didn't birth a child?” wondered O’Donnell.

The language does not specifically state a live birth.

WUSA9 contacted DC Public Schools and the DC Department of Human Resources but have yet to receive an explanation.

“The angel mom community is what's keeping me together, said O'Donnell.

Meanwhile, O’Donnell’s Facebook post has been shared more than 460 times, spreading the story of her angel whose life is worth fighting for.

“Aaliyah means exalted one.  I was pregnant and then I wasn't,” said O’Donnell, “and to my employer, it didn't matter the trauma that occurred, it had seemed as though my child never existed.”

O’Donnell is currently using her sick leave while she recovers.  She plans to return to the classroom in February.