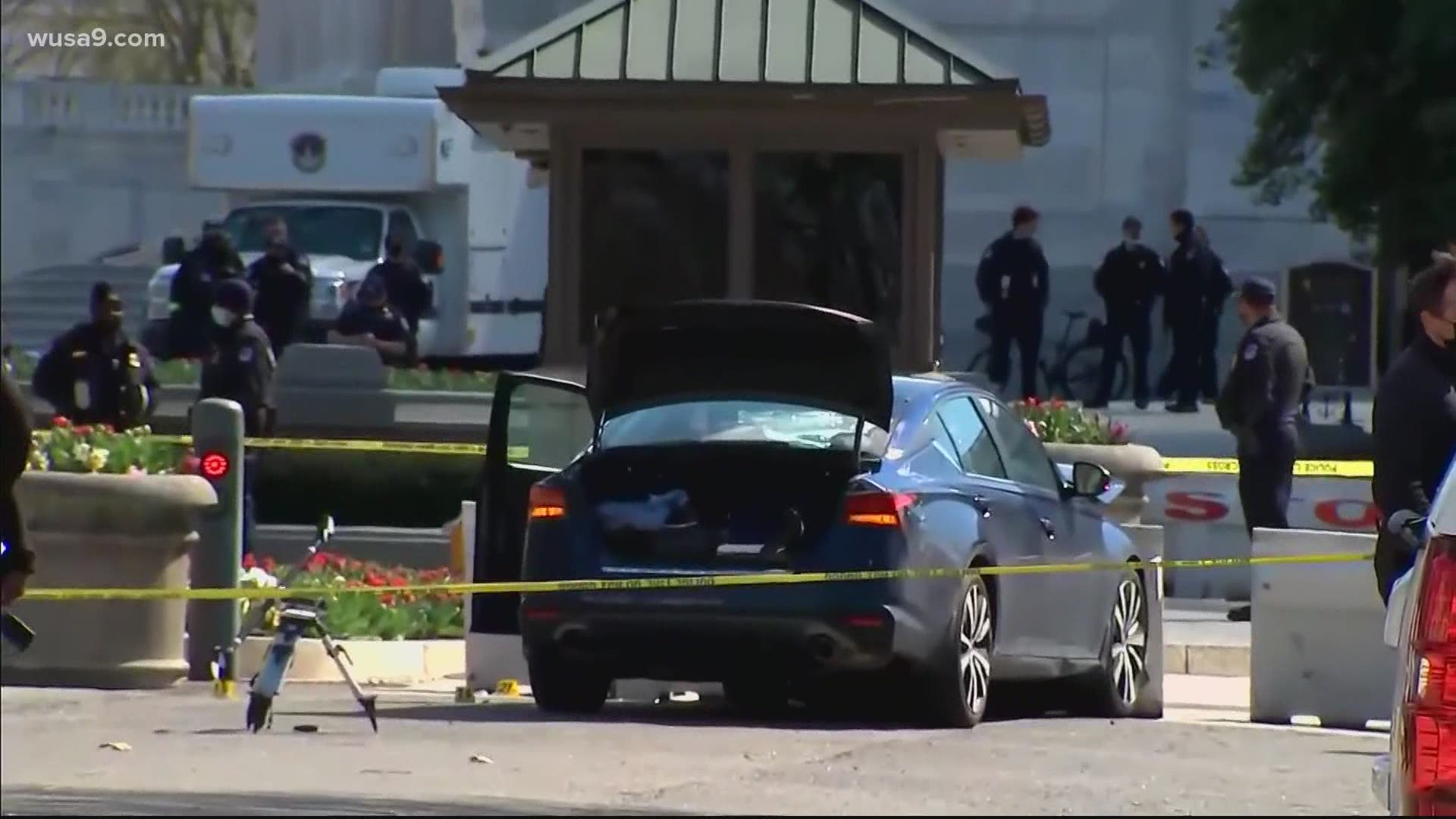 WASHINGTON — A U.S. Capitol Police officer and an Indiana man are both dead following a vehicle ramming attack at the Capitol complex.

According to Acting Capitol Police Chief Yogananda Pittman, around 1 p.m. a vehicle slammed into two officers at a checkpoint on Constitution Avenue on the Northside of the Capitol complex near the Russell Senate Office Building.

Pittman said the driver “exited the vehicle with a knife in hand” and lunged toward police. At least one of the officers then opened fire, fatally wounding the suspect.

Both officers and the suspect were transported to a hospital, where, according to Pittman, one of those officers died.

Below is the knife that 25-year-old Noah Green is accused of brandishing after he struck two U.S. Capitol police officers with his vehicle, killing one of them.

Green rammed the car into a barrier on the U.S. Capitol grounds, got out of the vehicle and lunged toward another officer with this knife -- before that officer shot and killed Green.

Credit: US Capitol Police
This is the knife that 25-year-old Noah Green is accused of brandishing after he struck two U.S. Capitol police officers with his vehicle, killing one of them.

The department identified the slain officer Friday afternoon as Officer William "Billy" Evans, an 18-year veteran of the Capitol Police Department and a member of the first responder division.

The latest on the #CapitolAttack: @CapitolPolice identify the officer killed in a ramming attack today as Officer William "Billy" Evans, an 18-year veteran of the force. More here: https://t.co/HNPLnNTo41 https://t.co/2FBYOSFWYU

"It is with a very heavy heart that I announce one of our officers has succumbed to his injuries,” Pittman said. “This has been a very difficult time for the Capitol Police department. I ask that you keep our U.S. Capitol Police family in your prayers.”

Capitol Police Union Chairman Gus Papathanasiou said Evans’ death was “a tragic situation that adds to a very difficult year for our membership.”

Shortly after Pittman confirmed the death of the Capitol Police officer, Speaker of the House Nancy Pelosi ordered flags at the Capitol flown at half-staff in his honor.

Speaker Pelosi has ordered the flags at the U.S. Capitol to be flown at half-staff due to the death of a U.S. Capitol Police Officer in the of duty today. The process of lowering the flags may take longer than usual because of the Capitol’s current lockdown status.

Law enforcement sources identified the driver of the vehicle to CBS News as Noah R. Green, 25, of Indiana. Green was said to have recent ties to Virginia. According to a U.S. official involved in the investigation, everything is "coming back negative" on Green across all law enforcement databases, and investigators have not yet found any obvious ties to extremist groups.

Congressional staffers were notified about the incident shortly after 1 p.m. when the Capitol Police alert system issued a warning about an "external threat" to the complex. Staffers were warned to stay away from exterior windows and doors.

1 / 15
AP
Police officers surround the scene after a car that crashed into a barrier on Capitol Hill on the Senate side of the U.S. Capitol in Washington, Friday, April 2, 2021. (AP Photo/J. Scott Applewhite)

By 2 p.m., an immediate reaction force of National Guard soldiers and airmen had been mobilized to secure the Capitol complex, which remained on lockdown. The Guard told WUSA9 no soldiers were injured during the incident at the Capitol.

According to Aaron Fristchner, a staffer for Virginia Rep. Don Beyer, the last time Congressional staff had received a lockdown alert from Capitol Police was on January 6 during the Capitol riot.

Beyer tweeted that it was "shocking and horrifying" to see the Capitol complex attacked again, and Maryland representatives David Trone and Dutch Ruppersberger offered their prayers for the injured officers.

Shocking and horrifying to see the Capitol attacked again. These officers will be in my thoughts, my thanks to them and to all the men and women in uniform protecting the Capitol. https://t.co/NwmY4DTJDv

This is a heartbreaking loss, my thoughts are with this officer’s family, loved ones and the entire USCP family

These men and women put their lives at risk to safeguard our democracy. We're thankful for their service and pray for those who are hurting during this difficult year https://t.co/31QUG14mmi

According to Congressional staffers who spoke with WUSA9, many employees who would normally be at the Capitol were working remotely because of Good Friday and the Easter holiday weekend.

The U.S. Capitol Police Department is deeply grateful for the support we’ve received from around the world. We wish we could respond to each one of you. Please know your sympathy is appreciated beyond words. pic.twitter.com/4wJTiKtJTj

This is a developing story and will be updated with more information as soon as it becomes available.